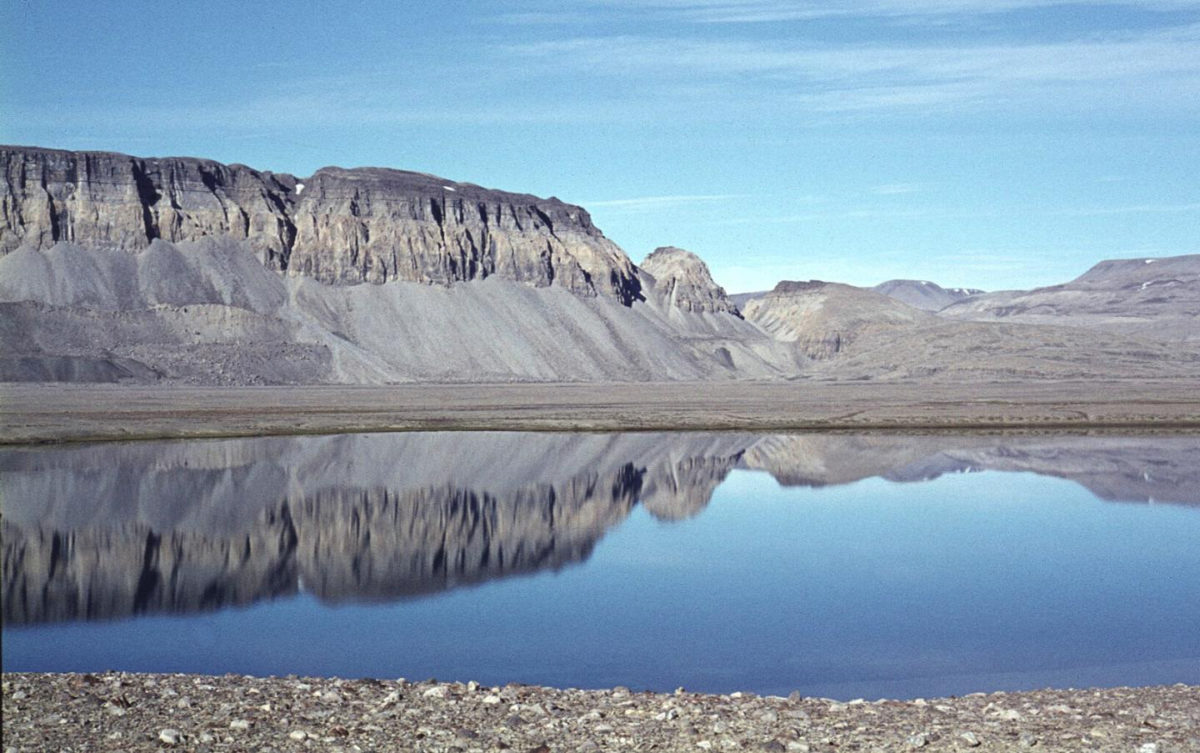 Sirius Passet site in the far north of Greenland

A team of researchers from Uppsala University have uncovered a hidden diversity of microscopic animal fossils from over half a billion years ago lurking in rocks from the northern tip of Greenland.

The ‘Cambrian explosion’ of animal diversity beginning ~541 million years ago is a defining episode in the history of life. This was a time when the seas first teemed with animal life, and the first recognisably ‘modern’ ecosystems began to take shape.

Current accounts of this explosion in animal diversity rely heavily on records from fossilised shells and other hard parts, since these structures are the most likely to survive as fossils. However, since most marine animals are ‘soft-bodied’ this represents only a small fraction of the total diversity.

Rare sites of exceptional fossilisation, like the world-famous Burgess Shale, have revolutionised palaeontologists understanding of ‘soft-bodied’ Cambrian life. Because of the special conditions of fossilisation at these localities, organisms that did not produce hard mineralized shells or skeletons are also preserved. Such sites offer a rare glimpse into the true diversity of these ancient seas, which were filled with a dazzling array of soft and squishy predatory worms and arthropods (the group containing modern crustaceans and insects).

One of the oldest of these truly exceptional fossil bonanzas is the Sirius Passet site in the far north of Greenland. Unfortunately, during their long history, the rocks at Sirius Passet have been heated up and baked to high temperatures as the northern margin of Greenland smashed into various tectonic plates and buried these rocks deep beneath the surface.

All this heating has boiled away the delicate organic remains that once formed the fossils of soft bodied animals at Sirius Passet, leaving only faint impressions of their remains.

Not far to the south of Sirius Passet, the rocks have escaped the worst effects of this heating. A team of palaeontologists from Uppsala (Ben Slater, Sebastian Willman, Graham Budd and John Peel) used a low-manipulation acid extraction procedure to dissolve some of these less intensively cooked mudrocks. To their astonishment, this simple preparation technique revealed a wealth of previously unknown microscopic animal fossils preserved in spectacular detail.

Most of the fossils were less than a millimetre long and had to be studied under the microscope. Fossils at the nearby Sirius Passet site typically preserve much larger animals, so the new finds fill an important gap in our knowledge of the small-scale animals that probably made up the majority of these ecosystems. Among the discoveries were the tiny spines and teeth of priapulid worms – small hook shaped structures that allowed these worms to efficiently burrow through the sediments and capture prey.

Other finds included the tough outer cuticles and defensive spines of various arthropods, and perhaps most surprisingly, microscopic fragments of the oldest known pterobranch hemichordates – an obscure group of tube-dwelling filter feeders that are distant relatives of the vertebrates.

This group became very diverse after the Cambrian Period and are among some of the most commonly found fossils in rocks from younger deposits, but were entirely unknown from the early Cambrian. This new source of fossils will also help palaeontologists to better understand the famously difficult to interpret fossils at the nearby Sirius Passet site, where the flattened animal fossils are usually complete, but missing crucial microscopic details.

‘The sheer abundance of these miniature animal fossils means that we have only begun to scratch the surface of this overlooked resource, but it is already clear that this discovery will help to reshape our view of the non-shelly animals that crawled and swam among the early Cambrian seas more than half a billion years ago,’ says Sebastian Willman, researcher at the Department of Earth Sciences, Uppsala University.