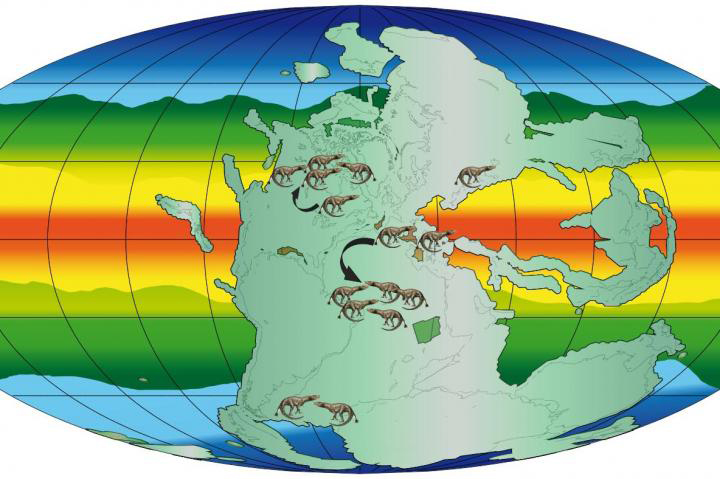 Life on land and tropical overheating 250 million years ago

Study shows how early reptiles were expelled from the tropics

One of the key effects of the end-Permian mass extinction, 252 million years ago, was rapid heating of tropical waters and atmospheres.

How this affected life on land has been uncertain until now.

In a new study published on January 9, 2018, Dr Massimo Bernardi and Professor Mike Benton from the School of Earth Sciences at the University of Bristol show how early reptiles were expelled from the tropics.

Geologists had already shown that ocean temperatures rose by 10-15 degrees centigrade as a result of global warming triggered by massive volcanic eruption.

The huge volcanoes erupting in Siberia belched thousands of tonnes of carbon dioxide into the atmosphere, setting off a chain reaction that involved global warming, acid rain, and loss of oxygen from the sea bed.

Together, these environmental crises led to the death of 95 percent of species.

Ten main lines of reptiles survived the crisis and re-populated the Earth in the subsequent Early Triassic time. However, they avoided the tropics, as did fishes and other animals in the oceans. The tropical clear-out was understood to have lasted several million years, but the new work shows that is not the case.

Dr Bernardi, the lead author, now Curator for Palaeontology at MUSE Science Museum in Trento, northern Italy, said: “We thought of using all available data to make our study as comprehensive as possible.

“Up to now, people used only the skeletons of the early reptiles from before and after the crisis, but these are found only in Russia and South Africa, so it is impossible to document any latitudinal shifts.

“We had been building a huge database integrating both skeletal and footprint data, and this allowed to fill a lot of the gaps, over Europe and North America for example.”

Co-author, Professor Benton, added: “Our analyses show that the land reptiles moved north by 10 or 15 degrees to escape the tropical heat.

“The footprint and skeleton data agree in this, but we had to consider how the geographic distributions of fossils matched available land masses and the availability of rock. After all kinds of checking for possible errors, we are clear this is a real effect.”

As the turmoil in the Early Triassic settled down, reptiles moved back to the tropics, but also maintained their temperate faunas. The turmoil then had a stimulating effect, and many new groups came on the scene, including the first dinosaurs.

Dr Bernardi said: “This was an important time in the history of life. It marks the end of ancient kinds of animals in the oceans and on land, and the beginning of the modern-style faunas we see today.

“What we have done is to try to dig deeper into our understanding of the exact consequences of rapid global warming during a well-documented historical event. This might be helpful in understanding what might happen in the future as we undergo more global warming today.”