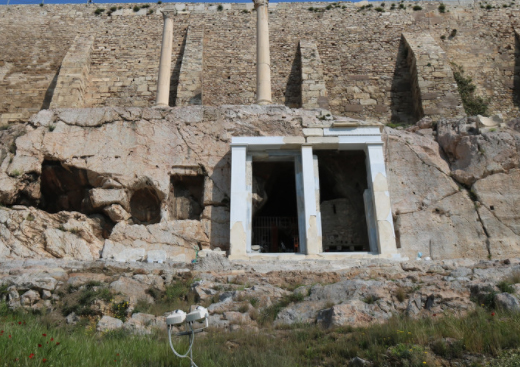 The choragic monument of Thrasyllus

The double 'secret' of the Acropolis

From whatever angle you look at it, the choragic monument of Thrasyllus is impressive.

The name given over decades to the cave on the southern slope of the Acropolis by people passing through that neighborhood was “the hole”. Τhe work site of recent years indicated that one more restoration programme was being carried out at that spot, just as on other monuments on the Sacred Rock. The bridge crane, however, has since been removed, the site restored to its previous state and Sunday strollers along the pedestrian walk of Dionysiou Areopagitou wonder about the identity of the monument that holds their gaze when they look above the Theatre of Dionysus.

Tourists arriving at the plateau with the huge pine tree and information boards learn the history of this exceptional monument, which has adorned the Acropolis for over 23 centuries. From whatever angle you look at it, the choragic monument of Thrasyllus is impressive. It had been thus constructed to be visible by the whole of ancient Athens. Today, it stands imposingly above the bustling D. Areopagitou and Makrygianni Streets; it stops you in your tracks when seen from the Parthenon Hall in the Acropolis Museum; it appears huge as you look at it from the Theatre of Dionysus.

It was constructed around 320 AD by Thrasyllus, judge of the contests of the Great Dionysia and was in the form of a small temple; the standard choragic monument. Three of its structural parts are standing, the rest lie on the ground. The monument collapsed when hit by a cannon in 1827, during the siege of the Acropolis by the Turks. Today, iron bars announce that something precious is hidden in its interior. The older locals are familiar with the church of Panagia Spiliotissa that was built during Ottoman rule. Most are surprised when learning about the monument’s double history from the information boards.

Everyone, especially visitors from abroad, wants to have a close look at the Ancient and Christian monuments coexisting in front and behind the cave. The guard’s whistle prevents them from getting too near.

One sunny Friday, the choragic monument’s architect-restorer, Dr Constantine Boletis (former Head of the Scientific Committee of the Acropolis South Slope Monuments) took us inside. It was a unique experience. Once the door is unlocked, an entire world is revealed. One wall painting in front of us depicts a Father of the church and Saint Spyridon, another wall shows John the Evangelist and a large rendering of Abraham’s Hospitality with three emblematic seated angels. Close by is a larnax with fresh plaster on it. Overhead are plexiglass constructions to protect the wall paintings from turning green from water seeping through the top of the cave.  At the back is the impressive marble icon depicting the Dormition of the Mother of God which has also been restored.

As Mr. Boletis explains “the mural decoration of Panagia Spiliotissa includes the best surviving examples of post-Byzantine hagiography in the area of the Acropolis and its slopes. After many years of research and restoration by the Committee of the Acropolis South Slope and the Ephorate of Antiquities of Athens, approximately 190 years after its collapse by Turkish cannon fire on February 1, 1827, the choragic monument of Thrasyllus converses again with the rock above the ancient theatre of Dionysus, enlightening us on the artist and aesthetic value of the Acropolis South Slope”.

The monument of Thrasyllus, which from the inscription on its lintel dates to 320/19 BC, was modified in 271/70 BC by his son, Thrasycles. “Its facade, almost a copy of the west facade of the south wing of the Acropolis Propylaea, looked like a gateway with two openings and pilasters, a central pillar, doors, a lintel with an unbroken row of a droplet motif, a frieze and a cornice. The frieze was decorated with ten olive wreaths, five on either side of a central ivy wreath, while above the cornice stood pedestals for choragic tripods”. After a small church was installed inside the cave, the choragic monument was preserved almost intact until 1827, with certain morphological alterations, such as the blocking of its two openings with walls. Ιt has always been a favorite topic in the historical iconography of 18th and early 19th century monuments of Athens.

Mr. Boletis says that in most works of historical iconography a marble statue of Dionysus can be distinguished in a central position on the monument, placed there, according to the most prevalent scientific arguments, in Roman times. This statue had been removed in 1802 on behalf of Lord Elgin and is now on display in the British Museum. As for the Christian chapel behind the ancient monument’s façade, it was there that, during Turkish rule, Athenian women went to pray for the health of their sick children.It was also in this cave however that adulteresses were shamed in public.

After the establishment of an independent Greek state, it had been announced that the monument was to be restored by the Archaeological Society. “The majority of its stones, however, were used to restore the Byzantine church of Panagia Sotira of Nicodemus, commonly known as the Russian Church on Filellinon Street”. The influence of this monument on western architecture is nevertheless important. “When the stones of Thrasyllus were taken away from the area of the theatre of Dionysus as common building material, its morphology was adopted and came to be a significant feature of the Greek Revival movement in Great Britain, through designs in the book Τhe Antiquities of Athens by British artists J. Stuart και N. Revett”. The olive wreath also became a decorative motif on other buildings.

“In his analysis of the Schauspielhaus in Berlin, the great German architect Karl Friedrich Schinkel declared that the Thrasyllus monument had been the source of inspiration for its colonnades. Morphological elements borrowed from the monument adorn the Rotunda of the Capitol Building and the Lincoln Memorial in Washington.”

Proper research began in 2002. Dr. Boletis supervised the implementation of the restoration study with Efrosyni Sampa MSc in charge of the building’s statics. The funding of the work did not advance smoothly. Work resumed in 2011 with restoration via Community Programmes and the Programme of Public Investments, with the project completed by the Ephorate of Antiquities of Athens. Four architectural members from the National Archaeological Museum were incorporated in the restoration, while a stone of the frieze bearing four emblematic wreaths was newly constructed with funds from the J F. Costopoulos Foundation.

The city is changing

“The restoration of the Thrasyllus monument has changed the neighbourhood”, said Dr. Eleni Banou head of the Ephorate of Antiquities to “Kathimerini”. It encourages us, in fact, to look at the city in a different way. “On the South slope are both the Thrasyllus monument, whose recovery after its ‘loss’ impresses visitors, as well as the Asclepion which is not so obvious, due to the tall trees, and comes into view only when taking the uphill path. There is also the Klepsydra which changed the landscape of the North Slope, while in the Roman Agora, the interior of the Kyrrestos Horologion can be visited for the first time, as can the Fethiye Mosque. The latter is one of the most important Ottoman buildings in the historical centre of Athens, which hosts small-scale events such as the exhibition on Hadrian which we are preparing for mid-January”. We are told by Dr. Banou that for security reasons visitors cannot enter the Thrasylleion. “The ascent is difficult. We want to reconstruct the steps of the Dionysus Theatre; neither has the walk been completely designed and this is also in the Ephorate’s programme”. These are all new routes in the city, such as Aristotle’s Lyceum, a new archaeological site opened a few years ago next to the Byzantine Museum; monuments and places that are “new destinations in the city”.