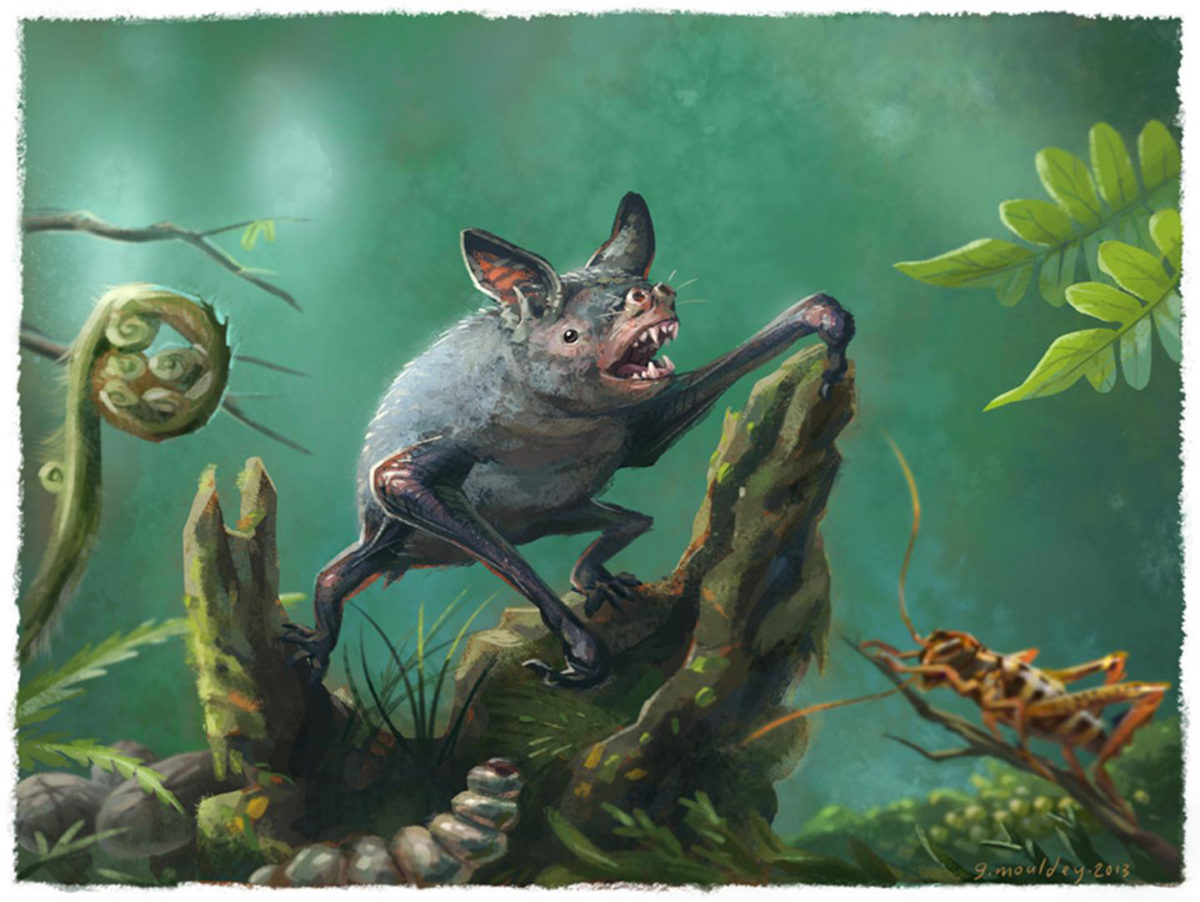 About three times the size of an average bat today

The fossilized remains of a giant burrowing bat that lived in New Zealand millions of years ago have been found by a UNSW Sydney-led international team of scientists.

Teeth and bones of the extinct bat — which was about three times the size of an average bat today —  were recovered from 19 to 16-million-year-old sediments near the town of St Bathans in Central Otago on the South Island.

The biggest burrowing bat ever known

Burrowing bats are only found now in New Zealand, but they once also lived in Australia. Burrowing bats are peculiar because they not only fly; they also scurry about on all fours, over the forest floor, under leaf litter and along tree branches, while foraging for both animal and plant food.

With an estimated weight of about 40 grams, the newly found fossil bat was the biggest burrowing bat yet known. It also represents the first new bat genus to be added to New Zealand’s fauna in more than 150 years.

It has been named Vulcanops jennyworthyae, after team member Jenny Worthy who found the bat fossils, and after Vulcan, the mythological Roman god of fire and volcanoes, in reference to New Zealand’s tectonic nature, but also to the historic Vulcan Hotel in the mining town St Bathans.

“Burrowing bats are more closely related to bats living in South America than to others in the southwest Pacific,” says study first author and UNSW Professor Sue Hand. “They are related to vampire bats, ghost-faced bats, fishing and frog-eating bats, and nectar-feeding bats, and belong to a bat superfamily that once spanned the southern landmasses of Australia, New Zealand, South America and possibly Antarctica.”

Around 50 million years ago, these landmasses were connected as the last vestiges of the southern supercontinent Gondwana. Global temperatures were up to 12 degrees Celsius higher than today and Antarctica was forested and frost-free. With subsequent fragmentation of Gondwana, cooling climates and the growth of ice-sheets in Antarctica, Australasia’s burrowing bats became isolated from their South American relatives.

“New Zealand’s burrowing bats are also renowned for their extremely broad diet. They eat insects and other invertebrates such as weta and spiders, which they catch on the wing or chase by foot. And they also regularly consume fruit, flowers and nectar,” says Professor Hand, who is Director of the PANGEA Research Centre at UNSW.

“However, Vulcanops’s specialized teeth and large size suggest it had a different diet, capable of eating even more plant food as well as small vertebrates – a diet more like some of its South American cousins. We don’t see this in Australasian bats today,” she says.

Insight into diversity of bats in Australasia

Vulcanops provides new insight into the original diversity of bats in Australasia. Its lineage became extinct sometime after the early Miocene, as did a number of other lineages present in the St Bathans assemblage. These include crocodiles, terrestrial turtles, flamingo-like palaelodids, swiftlets, several pigeon, parrot and shorebird lineages and non-flying mammals. Most of these were probably warm-adapted species. After the middle Miocene, global climate change brought colder and drier conditions to New Zealand, with significant changes to vegetation and environments.

It is likely that this general cooling and drying trend drove overall loss in bat diversity in New Zealand, where just two bat species today comprise the entire native land mammal fauna. All other modern land mammals in New Zealand have been introduced by people within the last 800 years.

The study, by researchers from Australia, New Zealand, the UK and USA, is published in the journal Scientific Reports.