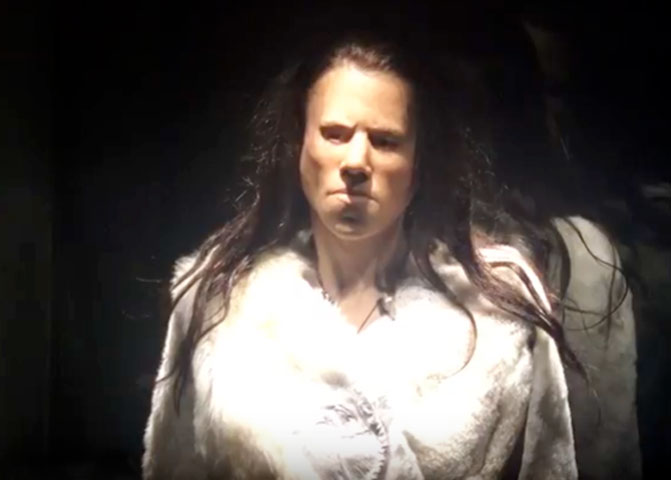 The Face of Avgi

What would the feelings be of an 18-year-old girl who lived 9,000 years ago in Thessaly, if she “travelled” to the present day? We shall never find out. But the reverse question (what thoughts and feelings would such an “encounter” create in us) was answered last Friday in the amphitheatre of the Acropolis Museum with the unveiling of “Avgi”; the reconstructed face from the skull of the young girl who in 1993 was located with her skeleton in the Theopetra Cave.

The unveiling of the face happened at the end of the conference called “Avgi/Dawn at the dawn of civilization” during which particularly interesting presentations were made by speakers covering a wide range of scientific knowledge, from archaeology, art history and architecture to economy, law, psychology and astronomy. There were also specialists who referred to prehistoric gastronomy, clothing and even aesthetics.

“Avgi” is the second creation of orthodontist Manolis Papagrigorakis, associate professor of Athens University, following the 2010 reconstruction of the face of Myrtis, the 11-year- old girl who lived and died of typhoid fever in Athens of the 5th century BC but whose path taken today has been very successful: She was named “Friend of the Millennium Development Goals” by the United Nations, as part of the organization’s worldwide campaign for combating poverty, while school textbooks with her face on their covers have circulated as far as Australia.

“I am so happy that today my friends, colleagues and I are presenting you the second reconstruction of an ancient face,” said Mr Papagrigorakis at the opening of the conference, while also announcing a piece of good news: “It seems that the Acropolis Museum generates beautiful news. On February 15, the Greek Post Office is issuing a stamp with the head of Myrtis, the UN’s ‘Millennium Friend’. I wish the new kore, Avgi/Dawn, to have the same luck,” he said, calling on the public, who were literally crammed into the amphitheatre, to follow the “journey” of investigation and research as presented by the speakers.

“We have large gaps in periods that are very distant or in regards to social strata that are not of primary interest. It is there you found a crucial part to play and with your abilities as scientists you achieved a small ‘miracle’; you brought people back to life, made them more accessible and presented us with more specific data than we had ever achieved earlier on” said Professor Kostas Buraselis, Vice Rector of Academic Affairs and International Relations at Athens University, in his address, referring to Professor Papagrigorakis.

“The University of Piraeus was very glad to place today’s event under its auspices. Despite the fact that our University does not deal with this particular subject in the narrow sense, the sciences are crossing each other’s paths today, are complementing one another and advancing together, opening new paths. In the case of Myrtis and Avgi, we have a flawless collaboration between science and art, which is innovative and out of the ordinary,” said Professor Angelos Kotios, Rector of the University of Piraeus, in his own address.

The conference’s first speaker was Nina Kyparissi-Apostolika, Dr. of Prehistoric Archaeology, director of the Theopetra Cave excavations and honorary director of the Ephorate of Paleoanthropology and Speleology of the Ministry of Culture and Sports. Her paper was entitled “The first confirmed ‘presence’ of a Mesolithic human in Thessaly, 9,000 years later”, in which she gave valuable information on the Cave and the burial of  “Avgi/Dawn”, but also on the period she lived, i.e. the Mesolithic (circa 9000-6700 BC), which, as the public was informed by the archaeologist, has hardly been located in Greece.

“Her name exactly conveys the dawn of today’s culture,” said Ms. Kyparissi of the girl from the distant past, about whom the studies showed as being between 18 to 25 years old at the most, with a height of 1.57 m, mildly affected by bouts of infection, possibly anaemia or even scurvy, but also with a marked prognathism. The bones date her to around 8070 BC. “To date, the Theopetra Cave still remains the only Mesolithic site in Thessaly, but its population and others must have moved around and possibly in future more sites will be found in caves or elsewhere,” added the honorary director.

Other speakers were Physicist Sofoklis Sotiriou (paper’s title “From the sky of Dawn …  to the sky of today … and tomorrow”), Neuroradiologist Panagiotis Toulas (“From medical thinking then … to medical thinking today”), Professor of Law Konstantinos Christodoulou (“The Prehistoric Dawn of Law”), Architect Theophanis Bobotis,  (“The house; a cell of the social fabric”), Professor of Financial Management Nikos Philippas, (“The Economy from Mesolithic Times to the era of Bitcoins and Robots”), Architect Panagiotis Emmanuel Tavaniotis (“With and without a face”), Professor of Medicine Dimitris Dikaios (“Decoration of the Body. Art and Culture. Avgi’s necklace and its significance”), Jeweller Alexia Pentheroudakis (“The sensation of beauty…”), Costume designer Yannis Metzikov (“Thoughts about clothing and discussions about the garment…”, Writer Elias Mamalakis (“Prehistoric gastronomy [need for nutrition, enjoyment]”), Archaeologist Theodorοs G. Giannopoulos (“What language did Avgi speak? Thoughts on the linguistic reality of the Late Mesolithic Age in Greece”), and Orthodontist Manolis I. Papagrigorakis (“Dawn at the dawn of civilization”).