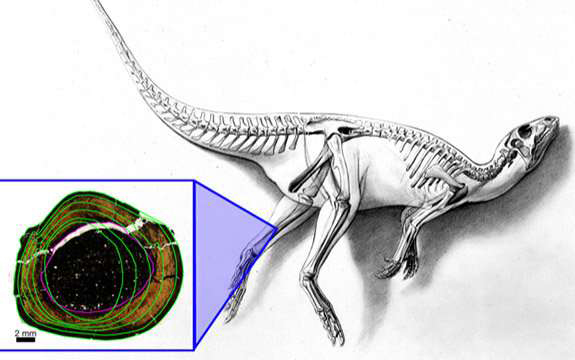 Dinosaurs that lived in what is now known as Victoria more than 120 million years ago would have dealt with prolonged periods of darkness and below freezing temperatures, a new study reveals.

The study, published in the Scientific Reports journal, examines the bone tissue microstructure of plant-eating “hypsilophodontid” dinosaurs known to have lived in the Antarctic Circle—now Victoria, Australia.

“These little dinosaurs would have dealt with prolonged periods of darkness and mean annual temperatures near freezing, and certainly below freezing in the winter,” says one of the study authors, Dr. Patricia Vickers-Rich, a professor of paleobiology at Swinburne.

An examination of the bone microstructure, or histology, of the hypsilophodontid fossils revealed many characteristics of their growth.

Bone histology revealed that, in general, growth was most rapid during the first three years of life, and the dinosaurs were fully grown—the size of a medium wallaby or average turkey—in five to seven years.

The hypsilophodontid samples were recovered from two Australian localities along the south Victorian coast stretching from west of Cape Otway to Inverloch, geologically separated by about 12 million years.

However, the trend of rapid growth for three years followed by adult body size between five and seven years, was conserved across the two samples.

“Given the geologic time involved, we may be looking at several polar dinosaur species in this sample, but their growth trajectories are so similar that we cannot differentiate them from one another based on their growth patterns and rates alone,” says Holly Woodward (Oklahoma State University).

“Instead, our life history assessment demonstrates to us that this generalised growth trajectory was a successful lifestyle for surviving in a region experiencing unique conditions.”

The tibia (shin-bone) of one hypsilophodontid individual in the sample had clearly suffered from a pathologic condition known as osteomyelitis or bone infection.

Microscopic examination revealed the cause of this pathology was most likely a broken bone, which then became infected. Counting the growth rings preserved in this tibia prior to the formation of the pathologic bone, the team was able to place the timing of the injury as having occurred when this individual was approximately four years old.

The team was also able to tease out how long this little dinosaur lived and how it dealt with the injury: histologic examination of the unaffected femur (thigh bone) of this individual shows that it survived with the injury and pathology for three more years.

“Further investigations of this unique sample will continue to shed light on how these little dinosaurs thrived in high latitudes and under the most stressful of environments during a time when dinosaurs flourished on planet Earth,” Dr. Vickers-Rich says.