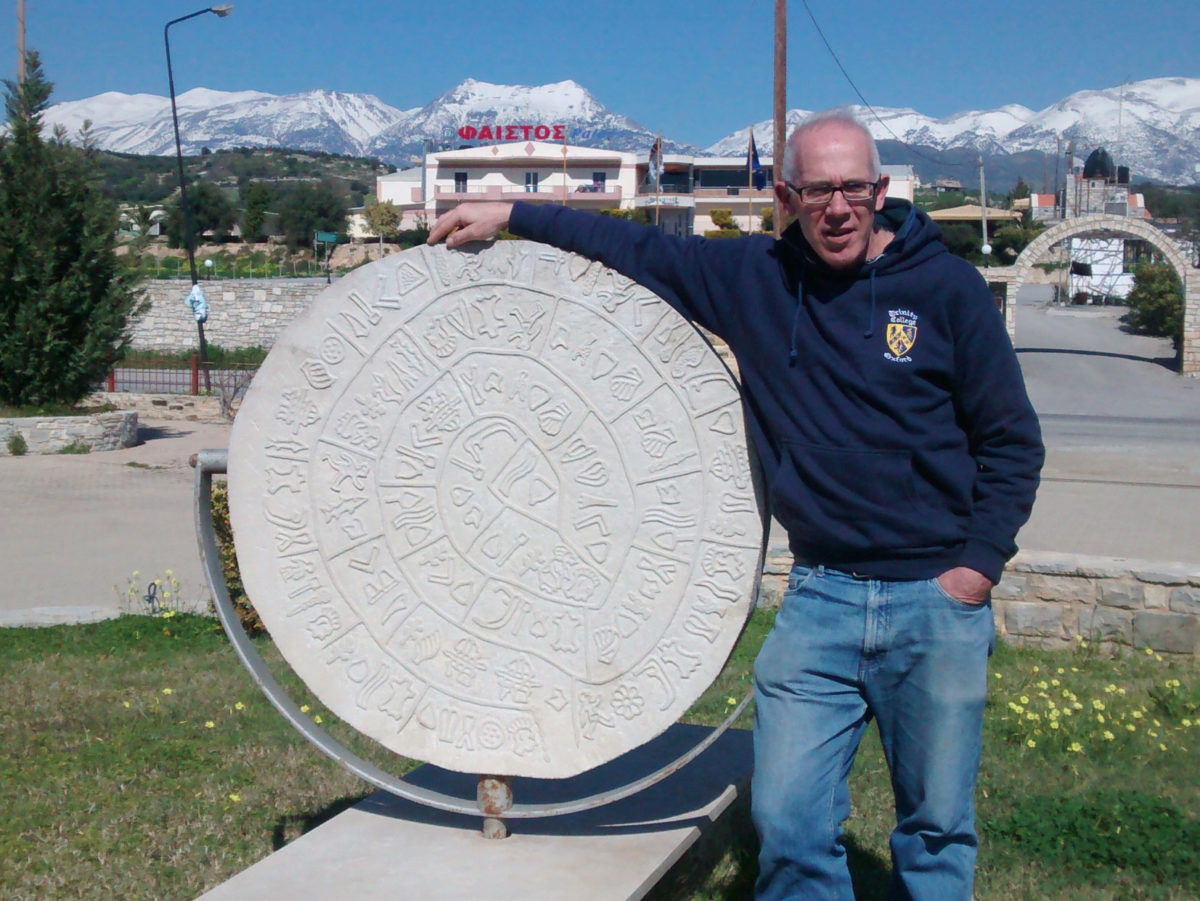 According to linguist Gareth Owens

“Side Α of the disk speaks of the pregnant goddess who glows and side B contains a sentence in two lines in Minoan alliteration which refers to the goddess who grows dim; The fading of Astarte/Aphrodite/Aphaia. With your help, I should like us one day in the future to translate these lines on the goddess of love and learn more”.

With these words, linguist Dr Gareth Owens, a specialist in Minoan script, concluded his interesting talk entitled “The Voice of the Phaistos Disk” given on Wednesday at the National Hellenic Research Foundation (NHRF), in collaboration with the Technological Educational Institute (TEI) of Crete.

“It has 61 words on the two sides and 18 lines in the form of a rhyming sonnet. Six words speak about the light and six words speak of the light’s fading. Three words speak about the pregnant goddess and another 10 about the goddess with different adjectives”, said Dr Owens in fluent Greek, addressing a large audience in the amphitheatre of the NHRF, who had come to hear his experimental interpretation of more than half the words on the Disk, based on many years of scientific research.

“Words and a whole sentence from the Phaistos Disk were also found in other Minoan religious syllabic inscriptions, both in the cave of Arkalochori and on the Yuchtas Mountain next to Archanes and Knossos. These religious inscriptions were found along with votive offerings, so the Minoan words together with the Minoan votive offerings are related both with religion and health.

“Consequently it can be seen in a logical context, i.e. the Phaistos Disk is a Minoan religious syllabic inscription read  in epigraphic continuity and related with almost parallel texts that are associated with holy sites and votive offerings , i.e. with wishes, prayers and above all with health,” Dr Owens noted.

He also did not forget to mention that “without my good friends and colleagues we would not have come to a reading of it, which I believe is the best possible in the last 110 years or in the last 37 centuries in which someone, man or woman, read the Phaistos Disk for perhaps the last time, 500 years before the Trojan War”, adding that “Naturally I have made mistakes. I take all responsibility. But we have also made an effort. Everyone makes mistakes; it is just that there is someone who has not made the effort.  Tonight I would like to share this effort with you in the hope we will make improvements and corrections together. We believe that we can now read 99% of the Phaistos Disk with the phonetic values of the Mycenaean Linear B script. We have a total of 242 printed signs, i.e. letter syllables, with 45 different signs. The time has come to make the next step towards understanding”. And he pointed out: “We can now talk about what over half the words on the disk mean” and how for 10% of the 61 words “we have linguistic clues as to their meaning” without knowing exactly what they signify. “Perhaps the voice of a Minoan Sappho or Hypatia is speaking about Astarte, the goddess of love, of Minoan Crete. The disk has 18 rhyming lines with poetic alliteration. Are we perhaps talking about lines like a Shakespeare sonnet? Or perhaps sοmething resembling Cretan mantinades?” Dr Owens wondered, initiating the public into the secrets of the Phaistos Disk , that still has a lot to reveal.

During the event, the public was greeted by Dr Evi Sahini, head of the National Documentation Centre and Professor Yannis Kaliakatsos, former vice chancellor, academic head of the International Relations Office of the TEI of Crete, while Dr Owens’ talk was followed by questions from the public.