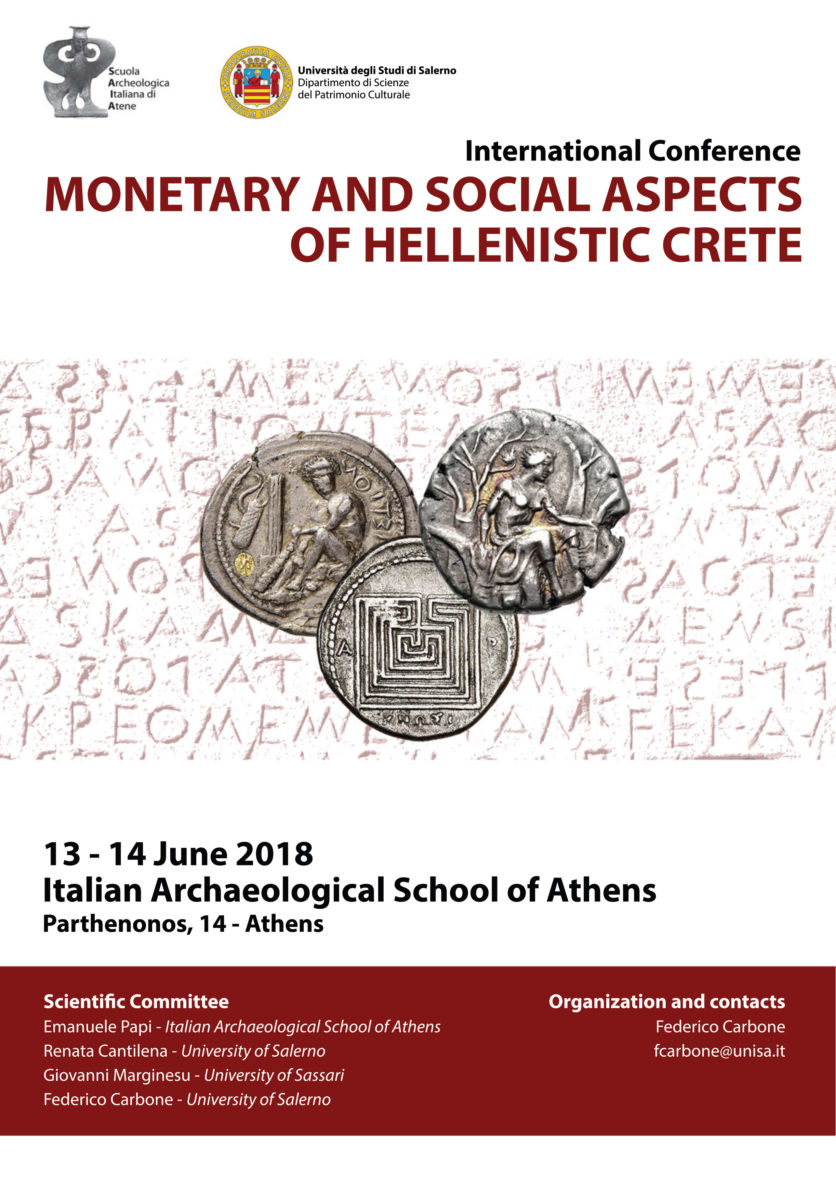 The Italian Archaeological School of Athens, in collaboration with the University of Salerno, organized a conference on the monetary and social aspects of the island of Crete in the Hellenistic age. The event provides an opportunity for encounter and reflection, serving in further analysing the signs of development that determined transformations in the monetary, administrative, urban and political areas.

The conference will be held in Athens on 13-14 June 2018, and will be organised into three sessions. The first to delineate an archaeological contextualization of the phenomena of transformation in the Hellenistic period; one about historical and epigraphic aspects concerning cretan economy; the third on numismatic analysis about coin production and circulation and the survey of the monetary relations between Crete and other realities beyond the island. We thought to include a call for poster intended to elicit new information.

Current research on Crete is opening new views on the historic and economic context of the island and on its relations within the broader Mediterranean. Studies published in recent years have begun to reconstruct the urban and territorial organization, developing a more complex profile for the Hellenistic period than had been previously theorized. However there remain notable difficulties in interpreting the social and economic phenomena.

The congress provides an opportunity for encounter and reflection, serving in further analyzing the sings of development that determined transformations in the monetary, administrative, urban and political areas.

In the past, the overall themes were addressed by studies in different areas, exploring the specificities and effects or phenomena such as mercenarism, commercial and military relations, and their internal and external political dynamics.

The congress is organized in thematic sections, opening with a presentation on the archaeological context for the island, evidencing the specificities of the urban and territoriual conditions and identifying the problems in understanding the processes of economic and social transformation in the Hellenistic era.

The next session focuses on the analyses of historic and epigraphic data, useful in investigating the evolutionary processes in administrative and economic systems.

Following this will be an encounter on the monetary economy. Recent numismatic research has dealt with this matter both at the internal level and as regards influences from external contexts on Cretan monetary aspects, focusing on revealing the peculiarities of the local systems of use and on aspects of production. The congress is an occasion to advance the study of the different data sources, and their interpretation via multidisciplinary approaches. It represents an opportunity to delineate an overall vision of the phenomena influencing the island in the Hellenistic area, going beyond the traditional models of scholarship.

For this reason, the congress organizers call for the presentation of new studies, on themes of socio-economic relevance, deriving from analysis of specific contexts or on the regional scale.

The proposed integration of knowledge will assist in:

– identifying significant moments of transformation in the social, political and economic spheres;

– evaluating the economic relations between the Cretan context and the other Mediterranean centres.

The congress will close with final discussions and debate on the identification of synergies and programmatic lines in research, for the study of the problems emerging during the various sessions.

Given the number of young researchers now active in analyses related to the Cretan context in the Hellenistic era, the organizers are launching a call for posters, intended to elicit new information and stimulate new lines of thought. Presenters should note that there will be a specific section in the program devoted to discussion and debate on the whole of the poster presentations.

Posters can include presentations of material, topographic elements, quantitative data, or interpretive syntheses, and must be in the format indicated by the conference organizers, with text not to exceed 3000 characters.

To propose a poster, send an abstract of 500-800 characters, within 15 March 2018, to the congress e-mail address. Proposals will be evaluated by the Scientific Committee.