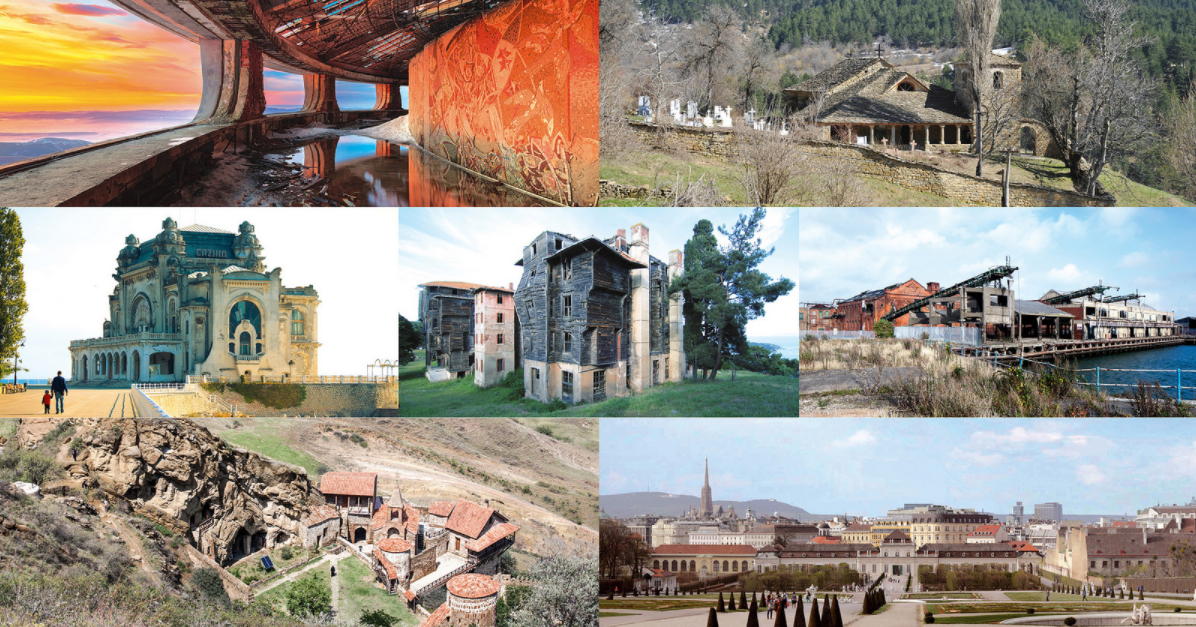 The Hague / Luxembourg, 15 March 2018 – Europa Nostra, the leading heritage organisation in Europe, and the European Investment Bank Institute have announced the most threatened heritage sites in Europe for 2018: the Post-Byzantine Churches in Voskopoja and Vithkuqi in Albania, the Historic Centre of Vienna in Austria, the Buzludzha Monument in Bulgaria, the David Gareji Monasteries and Hermitage in Georgia, the Constanta Casino in Romania, the Prinkipo Greek Orphanage on Princes’ Islands in Turkey, and the Grimsby Ice Factory in the United Kingdom.

These gems of Europe’s cultural heritage are in grave danger, some due to neglect or inadequate development, others due to a lack of expertise or resources. Experts from Europa Nostra and the European Investment Bank Institute, together with other partners and the nominators, will visit the 7 selected sites and meet with key stakeholders in the coming months. The multidisciplinary teams will provide technical advice, identify possible sources of funding and mobilise wide support to save these heritage landmarks. The specialists will formulate feasible action plans for the listed sites by the end of the year.

This new list of 7 Most Endangered is announced during the European Year of Cultural Heritage, which celebrates Europe’s shared cultural heritage – at EU, national, regional and local level – and aims to encourage Europe’s citizens to discover and engage with the cultural heritage. Previous lists were published in 2013, 2014 and 2016.

Maestro Plácido Domingo, President of Europa Nostra, stated: “This newest list of 7 Most Endangered comprises rare treasures of Europe’s cultural heritage that are in danger of being lost. The local communities are deeply committed to preserving these important examples of our shared heritage but need broader European support. I therefore call on local, regional, national and European stakeholders, both public and private, to join forces to secure a viable future for these sites.”

Francisco de Paula Coelho, Dean of the European Investment Bank Institute, said: “The ongoing European Year of Cultural Heritage provides an ideal framework for the launch of this fourth list of 7 Most Endangered sites. A recent evaluation of the previously selected sites and monuments has shown impressive progress with a number of them, and it has also substantiated the capacity of investment in cultural heritage to generate multiple benefits, notably also at the socio-economic levels. We are therefore hopeful that the sites included on this new list will be saved for future generations, thanks to a combined public and private support.”

The 7 Most Endangered for 2018 were selected by the Board of Europa Nostra from the 12 sites shortlisted by a panel of specialists in history, archaeology, architecture, conservation, project analysis and finance. Nominations were submitted by civil society or public bodies which form part of Europa Nostra’s network of member and associate organisations from all over Europe.

The 7 Most Endangered programme was launched in January 2013 by Europa Nostra with the European Investment Bank Institute as founding partner. It was inspired by a successful similar project run by the US National Trust for Historic Preservation. The 7 Most Endangered is not a funding programme. Its aim is to serve as a catalyst for action and to promote “the power of example”. It has the support of the Creative Europe programme of the European Union, as part of Europa Nostra’s network project ‘Sharing Heritage – Sharing Values’.

A number of Post-Byzantine churches in Voskopoja and Vithkuqi, situated in southeastern Albania, are the most representative monuments of 17th-18th century ecclesiastical art in the Balkans and are masterpieces of the post-Byzantine style. War, plundering and natural disasters have seriously damaged this group of 12 churches. The surrounding Christian population has greatly declined and a subsequent lack of clergy has resulted in the majority of the churches remaining unused for most of the year. The churches are under the responsibility of the Institute of Cultural Monuments. The listed Church of Saint George in Voskopoja, which won a Europa Nostra Award in 2011 for its outstanding conservation, now faces the threat of theft and highlights the urgency with which these remarkable churches need to be protected. The nomination for the 7 Most Endangered programme 2018 was submitted by “The Past for the Future” Foundation.

The Historic Centre of Vienna has immense significance to Europe’s tangible and intangible culture, as a city of great architectural importance and as an exceptional centre for the development of arts. In 2001, it was inscribed on the UNESCO World Heritage List. In 2012, a high-rise development, which will include the rebuilding and enlargement of the Hotel Intercontinental, was planned on the site of the Vienna Ice-Skating Club. The development would totally spoil the most famous view of the city from the Belvedere Palace and Gardens. In 2014, the City Council of Vienna issued a “High-Rise Concept” and a “Glacis Master Plan” which permit the construction of high-rise buildings on several points of the Ringstrasse area. These high-rise buildings would spoil the urban character of this area as well as the roofscapes and morphology of the Historic Centre of Vienna. Following numerous and unfruitful exchanges with Austria and the Vienna City Council, the World Heritage Committee inscribed the Historic Centre of Vienna on the List of World Heritage in Danger in July 2017. Europa Nostra Austria made the nomination for the 7 Most Endangered programme 2018.

Located in the mountains in the heart of Bulgaria, the Buzludzha Monument is an imposing example of 20th-century architecture. Built in 1981 to be the House-Monument of the then ruling Bulgarian Communist Party, the structure was in use for just 8 years. Soon after the end of the Communist regime, the monument was abandoned and has since been victim to thefts, vandalism and severe weather conditions. The ostentatious finish of its Brutalist architecture, heavy iconography and colourful mosaics has decayed. However, the building attracts increasing international attention. No action has been taken by the responsible authorities to protect the site so far. The Buzludzha Project Foundation, which made the nomination for the 7 Most Endangered programme 2018, proposes that the Buzludzha Monument could become an example for due preservation and interpretation of other similar “lieux de mémoire”(places of remembrance) throughout Central and Eastern Europe.

The David Gareji Monasteries and Hermitage are located in Eastern Georgia, on the semi-desert Iori plateau and partly extend into neighbouring Azerbaijan. Dating back to the 6th-century, the site is comprised of 22 rock-hewn monasteries and more than 5,000 sanctuaries and cave-cells. The combination of rock architecture, medieval murals, prehistoric archaeology and paleontological fields makes the entire ensemble a masterpiece of Georgian culture. It is registered as a Monument of National Importance. The monastery complex faces the threat of irreversible deterioration. The main problem is the disintegration of the rocks. The churches and other spaces suffer extreme structural damage. The collapse of the structures also threatens the wall paintings. The monastery complex is under the ownership of the Patriarchate of Georgia. It is still an active monastic center with daily services and this adds to its importance and underlines the urgency of its preservation. Increased tourism to the site presents an opportunity but its sustainability needs to be addressed. The Georgian Arts and Culture Center submitted the nomination for the 7 Most Endangered programme 2018.

Built in 1910, the Constanta Casino has become a landmark of the Black Sea shore. Daniel Renard, the Swiss Romanian architect who designed the building, opted for a lavish expression of Art Nouveau to reflect Romania’s modernisation during the reign of Carol I. Following many years of alternating commercial and state held responsibility for the building’s care, during the 2000s, the Casino was abandoned. It remains so to this day due to local authorities’ inability to find funding and to launch a rescue and restore operation. There have been several transfers of administrative rights from the Municipality of Constanța, the last of these being to the National Investments Agency within the Ministry of Development. The main danger to the building comes from the corrosion and rusting of structural metal parts. Sea storms and winds have shattered most of the windows facing the sea. It is very likely that the roof will collapse if this process continues. The nomination for the 7 Most Endangered programme 2018 was submitted by the ARCHÉ Association.

The Prinkipo Greek Orphanage is considered the largest wooden building in Europe and the second largest in the world. Located on Prinkipo, on the Princes’ Islands off the coast of Istanbul, it was built in 1899 to the design of French architect Alexandre Vallaury. The timber framed structure features elaborately decorated wooden columns in the grand hall and panelled ceilings with decorative mouldings. The building functioned as an orphanage until its closure in 1964. Since then, the neglected structure has deteriorated. Damaged by a fire in 1980, today the building is exposed to adverse weather conditions. Sections of the roof and corner posts have already fallen and the Orphanage is now at immediate risk of further collapse. Europa Nostra Turkey submitted the nomination for the 7 Most Endangered programme 2018. The setting up of a Centre of Environmental and Interreligious Dialogue in the building, as conceived by the Ecumenical Patriarchate of Constantinople, could figure as the most appropriate future use of the Orphanage.

The Grimsby Ice Factory is understood to be the oldest ice factory in the United Kingdom. Designed by the engineer W. F. Cott, the Factory dates from 1900 and is a substantial Grade II* listed red brick industrial building. The site is arguably the most prominent physical reminder of Grimsby’s fishing and maritime heritage, the largest fishing port in the world at the start of the 20th century. The Factory has been in a state of serious decline since its closure in 1990. The roof is now severely damaged allowing water into the interiors, and much of its metal work and electrical fittings have been stolen. Moreover, there have been threats of demolition. The Factory has remained in private ownership. A mixed use development proposal initiated by the Great Grimsby Ice Factory Trust, estimated to potentially create upwards of 125 jobs, has so far been unsuccessful in securing funding, resulting in the future of the Ice Factory remaining uncertain. The nomination for the 7 Most Endangered programme 2018 was made by SAVE Britain’s Heritage.