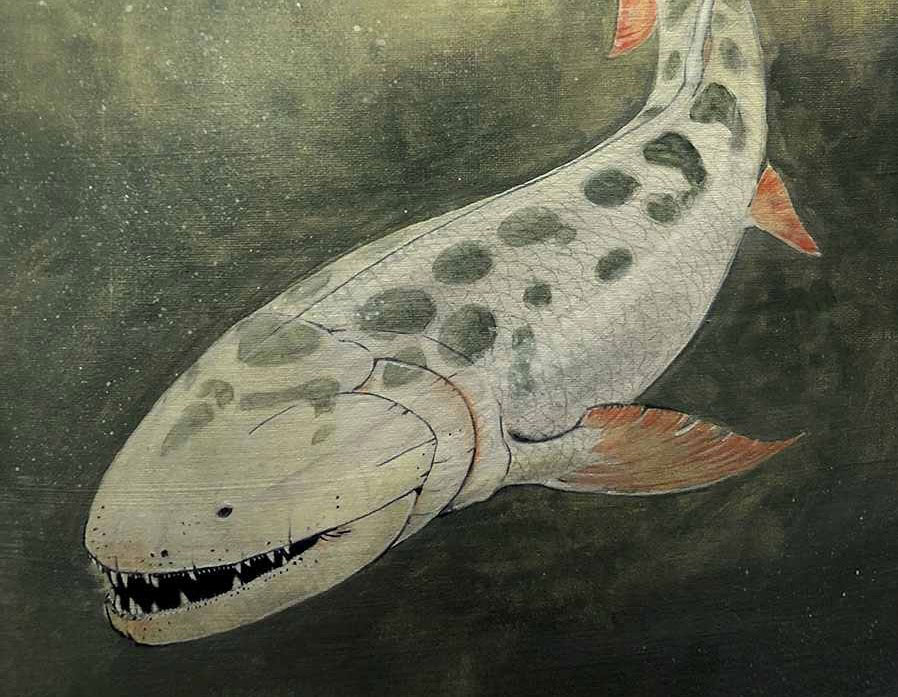 After 25 years of collecting fossils at a Pennsylvania site, scientists at the Academy of Natural Sciences of Drexel University now have a much better picture of an ancient, extinct 12-foot fish and the world in which it lived.

Although Hyneria lindae was initially described in 1968, it was done without a lot of fossil material to go on. But since the mid-1990s, dedicated volunteers, students, and paleontologists digging at the Red Hill site in northern Pennsylvania’s Clinton County have turned up more – and better quality – fossils of the fish’s skeleton that have led to new insights.

Academy researchers Ted Daeschler, PhD, and Jason Downs, PhD, who specialize in the Devonian time period (a time before dinosaurs and even land animals) when Hyneria lived, have been able to reconstruct that the predator had a blunt, wide snout, reached 10-12 feet in length, had small eyes and featured a sensory system that allowed it to hunt prey by feeling pressure waves around it.

“Dr. Keith Thomson, the man who first described Hyneria in 1968, did not have enough fossil material to reconstruct the anatomy that we have now been able to document with more extensive collections,” explained Daeschler, curator of Vertebrate Zoology at the Academy, as well as a professor in Drexel’s College of Arts and Sciences.

Originally, pieces of the fish were collected in the 1950s. Thomson described and officially named Hyneria lindae in 1968, but he had just a few pieces of a crushed skull and some scales to work with.

The new discoveries that Daeschler and Downs (who is an assistant professor at Delaware Valley University) wrote about in the Journal of Vertebrate Paleontology were made possible by years of collecting that turned up, “well-preserved, well-prepared three-dimensional material of almost all of the [bony] parts of the skeleton,” according to Downs.

No single complete skeleton exists of this giant, but enough is there to show that Hyneria would have truly been a monster to the other animals in the subtropical streams of the Devonian Period, roughly 365 million years ago. An apex predator, Hyneria’s mouth was bristling with two-inch fangs. For reference, that’s bigger than most modern Great White Shark’s teeth.

Due to its sheer size, weaponry, and sensory abilities, Hyneria may have preyed upon anything from ancient placoderms (armored fish), to acanthodians (related to sharks) and sarcopterygians (lobe-finned fish, the group Hyneria belongs to) – including early tetrapods (limbed vertebrates) that are also found at the site.

Since the streams Hyneria lived in were likely murky and not conducive to hunting by eyesight, sensory canals allowed it to detect fish swimming near it and attack them.

“We discovered that the skull roof elements have openings on their surfaces that connect up, forming a network of tubes that would function like the sensory line system in some modern aquatic vertebrates,” Daeschler said. “Similarly, we found a network of connected pores on the parts of the scales that would be exposed on the body of Hyneria.”

All of the new information gleaned about Hyneria is doubly valuable because it provides more information about the ecosystem – and time period – it lived in. The Devonian was a pivotal time in vertebrate evolution, especially since some of Hyneria‘s fellow lobe-finned fish developed specialized fins that would take them onto land and eventually give rise to all limbed verterbates including reptiles, amphibians and mammals.

“Hyneria lived in a time and place that is of incredible interest to those of us studying the vertebrate fin-to-limb transition,” Downs commented. “Each study like this one contributes more to our understanding of these ecosystems and what may have played a part in the successful transition to land.”