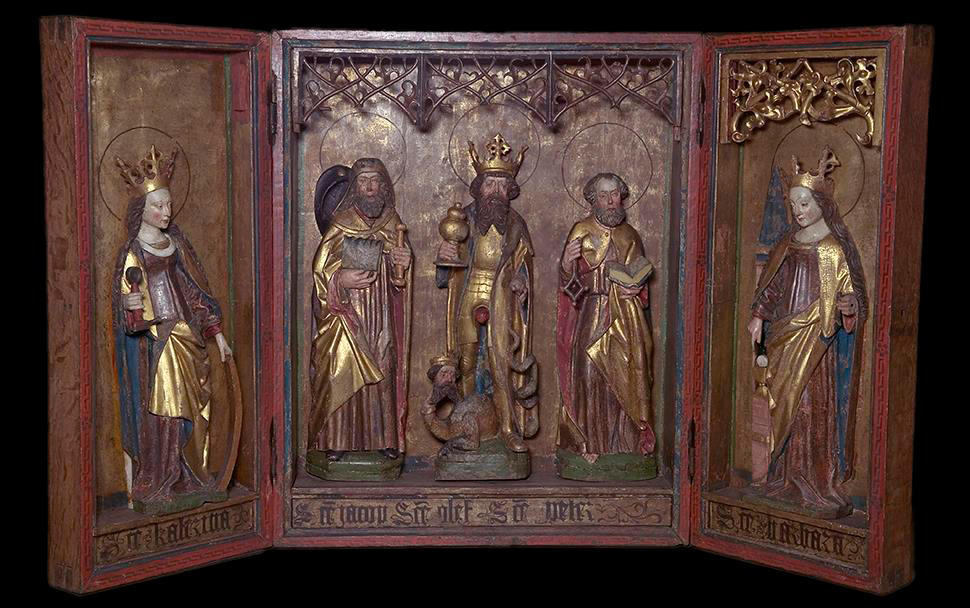 Research reveals origins of the altarpieces

Unique findings from the Netherlands

It was previously believed that altarpieces from the late Middle Ages were made in Germany. New research shows that several of them were made in Norway.

Altarpieces from the Middle Ages are a feature of many churches along the coast of Norway. They are often called Lübeck altarpieces, because it was assumed that the altarpieces were imported to Norway by the Hanseatics from Lübeck. Kristin Kausland’s research shows that the ecclesiastical art is more Norwegian than previously thought. Major parts of the altarpieces were made in Norway, new analyses show.

Kausland is a postdoctoral fellow with the Department of Archaeology, Conservation and History and the first person to earn a PhD in conservation at a Norwegian university. While working on her doctoral thesis, she studied more than 60 altarpieces, most of them in Norway and Germany, but also several in Sweden and Denmark. Some of the altarpieces are in museums, others in churches along the Norwegian coast.

The researcher used advanced technical equipment to reveal the origins of the altarpieces. Using an infrared camera, UV camera and electron microscope, she searched for hidden clues.

“Through analyses of even the tiniest paint fragment I have sought to trace the physical prints of the craftsmen and the various production environments under which the objects were created. Call it, if you will, the craftsmen’s fingerprints,” says Kausland.

Because there is no written documentation on the origins of the altarpieces the physical clues are important. Gilding, type of wood, hinges and type of paint are some of the elements that can reveal where an altarpiece was made.

“In Germany, the craftsmen were organised in guilds. There were strict rules for what was allowed. For example, there were several places where the use of materials other than real gold was not permitted. At that time, churches were very dark. The idea was that these altarpieces should radiate toward you, creating the impression of something holy. They were supposed to shine, and give light,” she explains.

The altarpieces that Kausland believes were made in Norway used imitation gold instead of real gold. In the Norwegian altarpieces, several types of oak were also used. This set them apart from the Northern German altarpieces, which were made of Baltic oak.

“In Norway, it appears that people used whatever was the most accessible. Nor were there any established forms of constructional design. It was a somewhat more pragmatic and practical approach, where the craftsmen were probably not governed by guild statutes. Among other things, you could mix different grades of oak,” Kausland says.

The way the altarpieces were constructed could also vary from country to country.

In the Netherlands, a particular type of hinge and design were used, whereas in Germany the altarpieces were assembled in a different way. This was regulated by the traditions of the guild association of the casemakers, she says.

Unique findings from the Netherlands

During the Reformation in the Netherlands the decision was made to destroy all of the decorations in the churches. The altarpieces were demolished. The fact that several such altarpieces are located in Norway is therefore of great international importance, she says.

One of these altarpieces is located in Trondenes Church. Another is from Austevoll, and is at Bergen Museum. There is a high probability that there are more Dutch altarpieces in Norway, Kausland believes.

This opens up the possibility that many other altarpieces whose origins have been unknown, probably also came from the Netherlands. This is very important and interesting, as there are almost no such altarpieces in the rest of Europe.

A plan to exhibit one of the altarpieces in the Netherlands is in the works.

At least one of the altarpieces will be sent to an exhibition in the Netherlands in the near future so that it can be shown to a Dutch audience.

For Kausland, the work on her doctorate has been a pure treasure hunt. Many of the altarpieces are located in small churches in fishing villages along the coast.

The altarpieces are hidden treasures. At first glance they may be a little dark, but when you look past the layers of grime, and down to the original expression, you see that they are quite impressive. These are beautiful objects, which have been considered rather inferior art, and not part of Norwegian history. But they are an important part of Norwegian cultural heritage, and of fairly high quality, she notes.

Five different craftsmen were required. Painters, woodcarvers, casemakers, ironsmiths and so-called preparers were involved. The latter prepared and laid the foundation for the painting carried out by painters.

Not an extinct tradition

The anonymous craftsmen interest her.

We often look at fine art and forget all the other work that went into it. We concentrate on the paintings and sculptures, but forget that someone made the actual case. The “rough work”, that which is not elevated art, is easily forgotten. I am interested in the anonymous craftsmen who have put their souls into an altarpiece and have tried to answer questions about origins, and how these craftsmen collaborated.

In the past, it was believed that these Norwegian craft traditions died out during the Black Death. Kristin Kausland’s research shows that the traditions continued to live on.

It is also likely that there was a great deal of collaboration across national borders, by which the construction of the case was done in Bergen, while the finer wood carving art was done down on the continent, she explains.

Before Christmas last year, Kausland was awarded a mobility grant from the Research Council of Norway. She is now working on a three-year post-doctoral project that will build on her PhD research. She will work at the Hamilton Kerr Institute at the University of Cambridge for the first two years of the post-doctoral period. The postdoctoral project includes fieldwork in Germany, Denmark, Sweden and the Netherlands, where several altarpieces will be put under the researcher’s magnifying glass.

The doctorate opened up many exciting approaches. Ecclesiastical art serves as silent witnesses of the organisation of workshops, trade and collaboration. It is after all not the geographical origin that is ultimately the essence of this art, but the Catholic universe that it represents. This will be the main theme of the post-doctoral project, says Kausland.