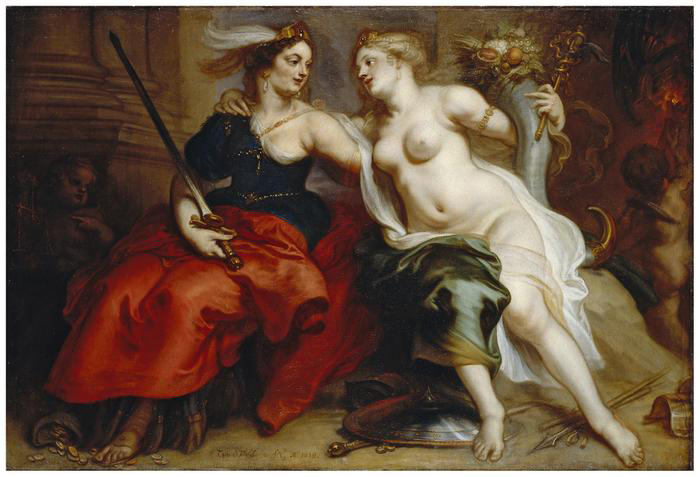 Peace from Antiquity to the Present Day

400 years after the outbreak of the Thirty Years’ War (1618), 370 years after the Peace of Westphalia (1648) and 100 years after the Treaty of Versailles (1919), the exhibition “Peace. From Antiquity to the Present Day” addresses the question of why people of every era have wanted peace but have never been able to preserve it in the long term. Peace means more than merely renouncing the use of force: it carries with it the hope of harmony, friendship, love, happiness, prosperity and justice.

In Münster, the city where the Peace of Westphalia was concluded, this exhibition is being presented by five institutions – the LWL-Museum für Kunst und Kultur, the Kunstmuseum Pablo Picasso Münster, the Archäologisches Museum der Westfälischen Wilhelms-Universität (WWU), the Diocese of Münster and the Stadtmuseum Münster – in a unique collaborative project. It was developed on an interdisciplinary basis
in co-operation with the WWU Cluster of Excellence “Religion and Politics”.

The exhibition at the Archäologisches Museum der Universität Münster focuses on peace in antiquity, starting with the oldest peace treaty in the world, concluded between Egypt and the Hittite Empire in 1259 BC. In Greece, the gods were the guarantors of peace, and in fourth-century-BC Athens a magnificent cult statue was dedicated to Eirene, the goddess of peace. The Roman emperors used symbols of freedom as visual allusions to their good governance and the consequent prosperity of the empire. The third century AD presents a piquant contradiction: the times were as warlike as never before, and yet images of Pax, the goddess of peace, and other peace-bringing gods appear on countless coin series – a case of inflation in the currency of peace.

For the catalogue of the exhibition: https://verlag.sandstein.de/detailview?no=98-385