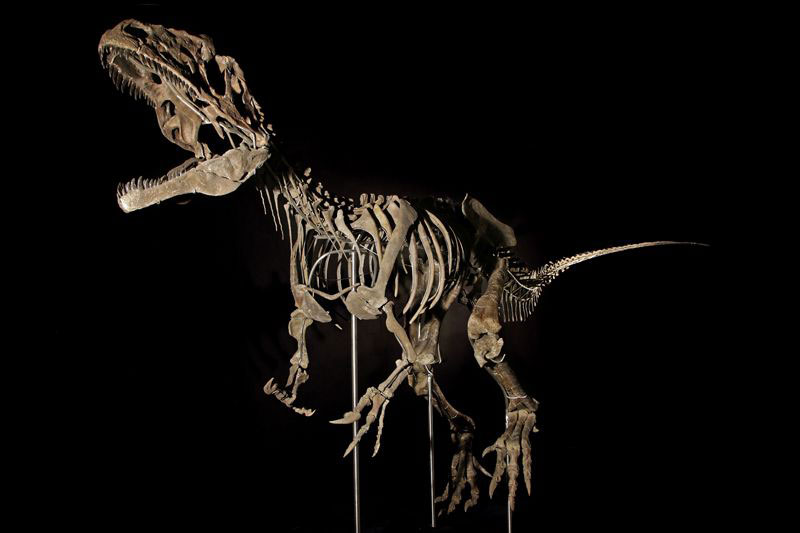 Private collectors show a huge interest in dinosaur fossils, as shown once again at a sale that took place in the first floor of the Eiffel Tower in Paris, where the huge skeleton of a mysterious dinosaur species of approximately 154 million years was sold for $2.3 million.

The skeleton – 9 metres long, 2.5 metres high, with 70% of the original bone conserved – was discovered in the course of excavations carried out in 2013 at a site on the Morrison Formation, an Upper Jurassic geological sequence laid down 155–148 million years ago that covers much of the western United States and that is one of the world’s richest sources of dinosaur fossils. It probably belongs to an up to now unknown carnivorous species of allosaurus. It being a unique fossil, its value exploded at the sale managed by the French auction house Aguttes.

The fossil was bought by an unnamed French collector of art works, who promised to lend it to a museum, so that all the world will be able to see it. However, scientists are not at all sure that this will happen and are afraid that a rare fossil will be lost from the field of Paleontology.

In recent years there is a trend of selling fossils to private collectors. This increased demand raises their prices, making it thus more and more difficult for museums and other scientific bodies to acquire the fossils.

The Society of Vertebrate Palaeontology, representing more than 2,200 palaeontologists from all over the world, had submitted a request to Aguttes auction house to cancel the auction and prevent such a unusual fossil to end up in private hands. The auction house proceeded with the auction answering that the buyer had reassured them that the fossil will be lent to be exhibited in a museum.

The debate over who can buy and sell fossils is an old one, Aguttes spokesperson Eric Mickeler  says. “Since the nineteenth century, the market of fossils was organized and animated by private companies and private buyers, not only by museums.”

The most recent trend is the increased private sale of fossils at auctions. Aguttes sold an Allosaurus for more than €1.1 million in 2016, and a Siberian mammoth for €548,000 in 2017.

Mickeler said that “herbivores do not quite excite businessmen who buy dinosaurs the same way as carnivores do. They want to buy carnivores like themselves.”

Paris has hosted numerous fossil auctions in the past few years. In April, auction house Binoche et Giquello fetched more than €1.4 million apiece for skeletons of an Allosaurus and a Diplodocus; it also sold a Triceratops skull in 2017.

Dinosaur fossils sold at auctions have mostly been excavated from private land in the United States and initially sold by the land owners to collectors and traders, according to Paul Barrett, a palaeontologist at the Natural History Museum in London. “The USA is now, basically, the only place where it’s possible to obtain dinosaur skeletons to sell legally on a regular basis,” he says. “There are other places, including the UK, where it would be legal also under certain circumstances, it’s just that complete skeletons don’t appear often outside the USA.” Many other countries where complete fossils can be found, such as China, Mongolia and Argentina, have laws prohibiting the export of fossils.