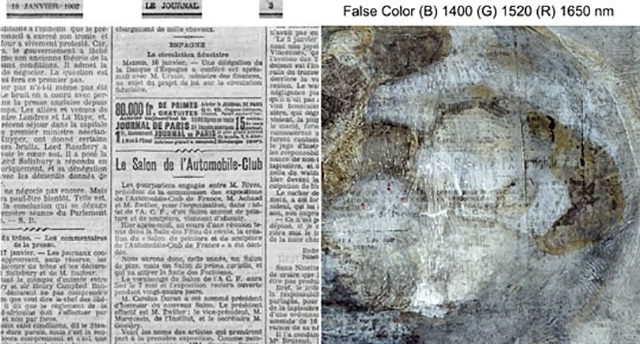 Recent hyperspectral infrared imaging conducted by John Delaney, senior imaging scientist, National Gallery of Art, Washington, of Pablo Picasso’s Mother and Child by the Sea (1902), a Blue Period painting in the collection of the Pola Museum of Art, Japan, revealed portions of printed text in French similar to newsprint. Using the readable text, Keiko Imai, chief curator, Pola Museum of Art, was able to identify the source of the text as an issue of the French daily newspaper Le Journal published on January 18, 1902. While the reason for the presence of newsprint in the paint layers is a mystery, the discovery is significant for Picasso scholars due to the proximity of the date to the artist’s move from Paris to Barcelona. The study also provided more information about a prior paint composition seen in the x-radiograph. The infrared images also show another earlier signature by the artist in the opposite orientation. Mother and Child by the Sea is on view at the Pola Museum through mid-August of 2018. The painting will be on loan to the Musée d’Orsay for their upcoming exhibition, Picasso: Blue and Rose, from September 18, 2018, through January 6, 2019.

The study of the painting is part of continuing investigations into the artist’s Blue Period works in anticipation of an exhibition in 2020–2021 on Picasso’s Blue Period, co-organized by the Art Gallery of Ontario (AGO), Toronto, Canada, and The Phillips Collection, Washington, DC. To this end, Kenneth Brummel, assistant curator of modern art, AGO, and Sandra Webster-Cook, senior paintings conservator, AGO, arranged for Delaney to travel to Japan and examine Mother and Child by the Sea with Keiko Imai. The findings of this study will be published in a joint paper co-authored by Imai and Delaney. The discovery follows recent research by a partnership of the Northwestern University/Art Institute of Chicago Center for Scientific Studies in the Arts (NU-ACCESS), the AGO, and the National Gallery on La Miséreuse accroupie (1902), another Blue Period work from the AGO’s collection that will be featured in the upcoming exhibition. At the American Institute of Conservation’s annual meeting on Friday, June 1, 2018, Webster-Cook presented this research along with other discoveries about Picasso’s La Soupe (1903), which has also been studied by the AGO, NU-ACCESS, and Delaney.

“I was surprised and fascinated by this finding in a painting I have always admired at our museum,” said Imai. “Thanks to Dr. Delaney’s research and hyperspectral imaging technique, we were able to officially confirm that Mother and Child by the Seawas painted after the date of the newspaper article used on the canvas.”

“We routinely focus our cameras on a sheet of paper with printed text prior to placing the painting on the easel,” said Delaney. “To verify we were in good focus, we pointed the camera first at the face of the mother and to my surprise immediately saw newspaper text in her face!”

“The presence of a paper interleaf begins to make sense of the fine wrinkling in the surface texture and the gentle undulations observed in several areas over the surface,” said Webster-Cook. “It suggests that the paper does not perfectly conform to the underlying paint surface.”

Brummel added, “What is exciting about this finding is that the sheet from Le Journal that Keiko Imai has identified offers Picasso scholars a firm date before which the seated woman in the composition underneath was painted. The January 18, 1902 date of the paper interleaf is also of interest, as it is known Picasso returned to Barcelona from Paris sometime in early January 1902.”