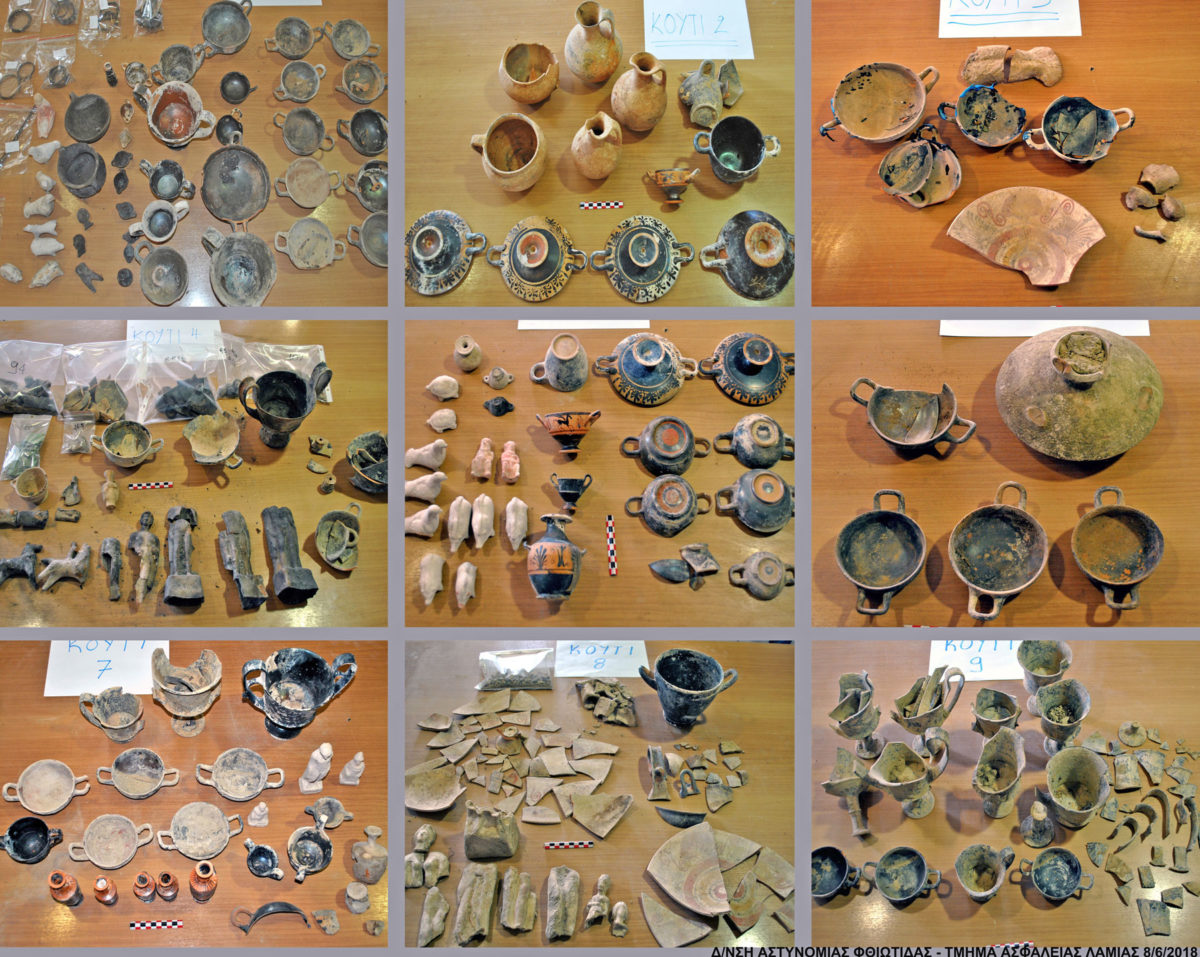 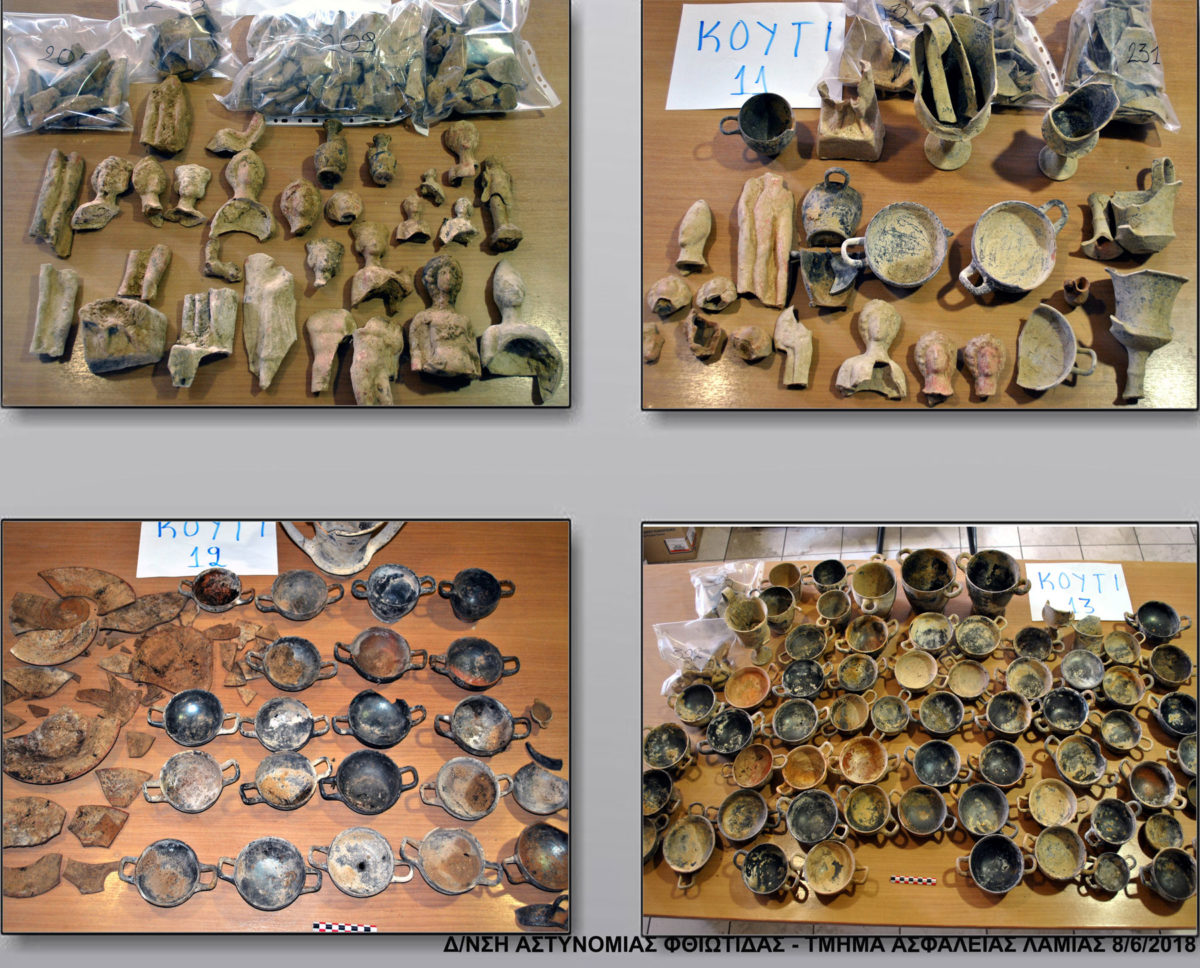 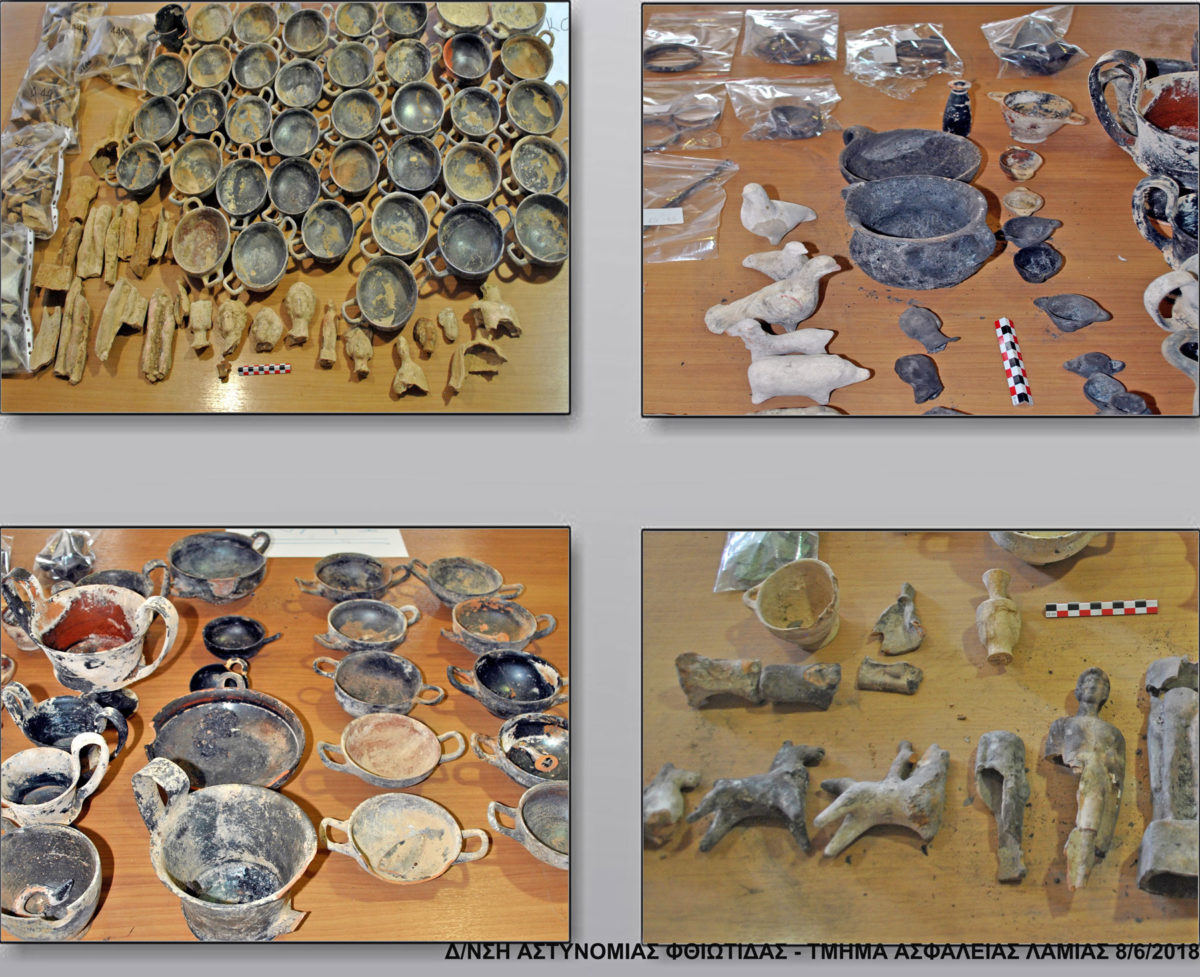 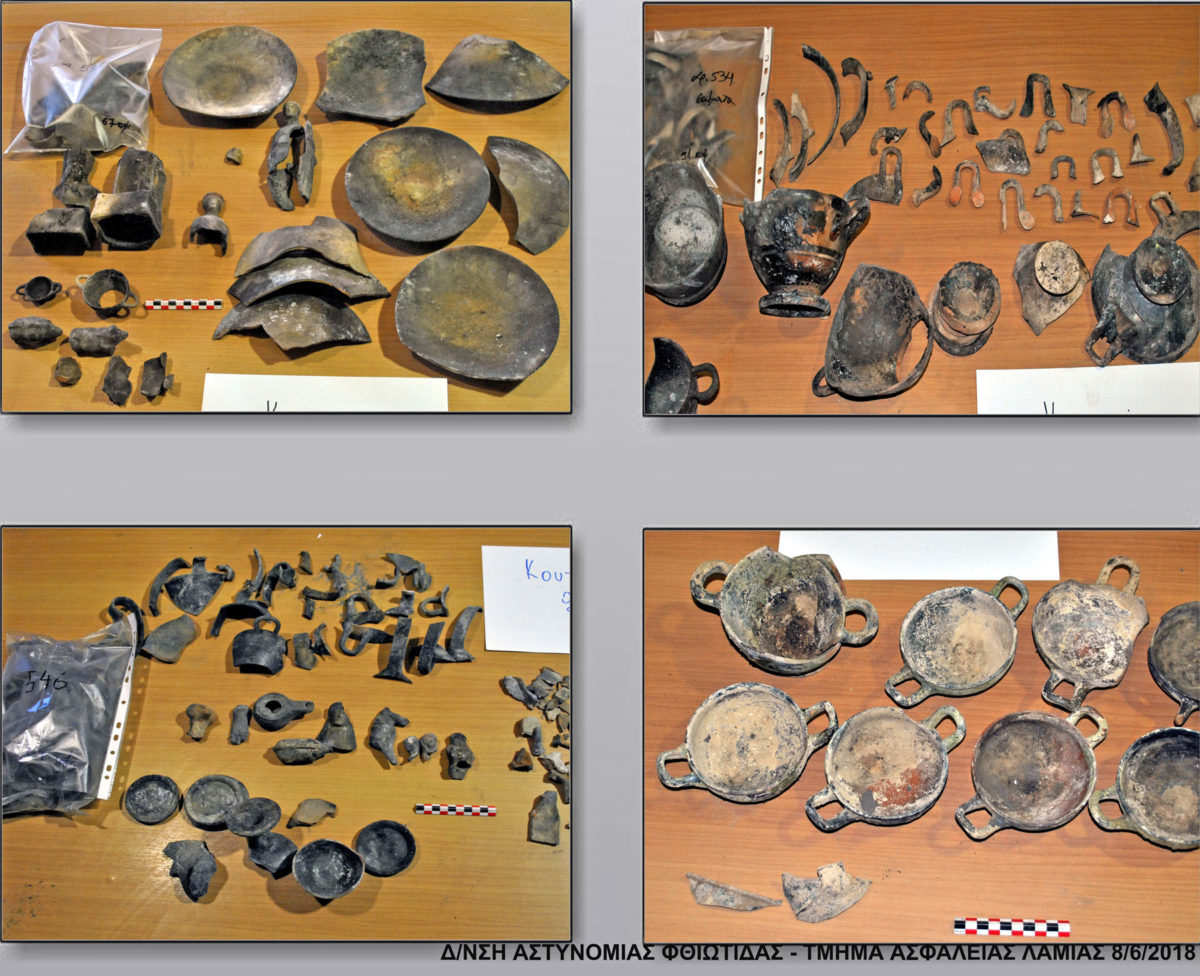 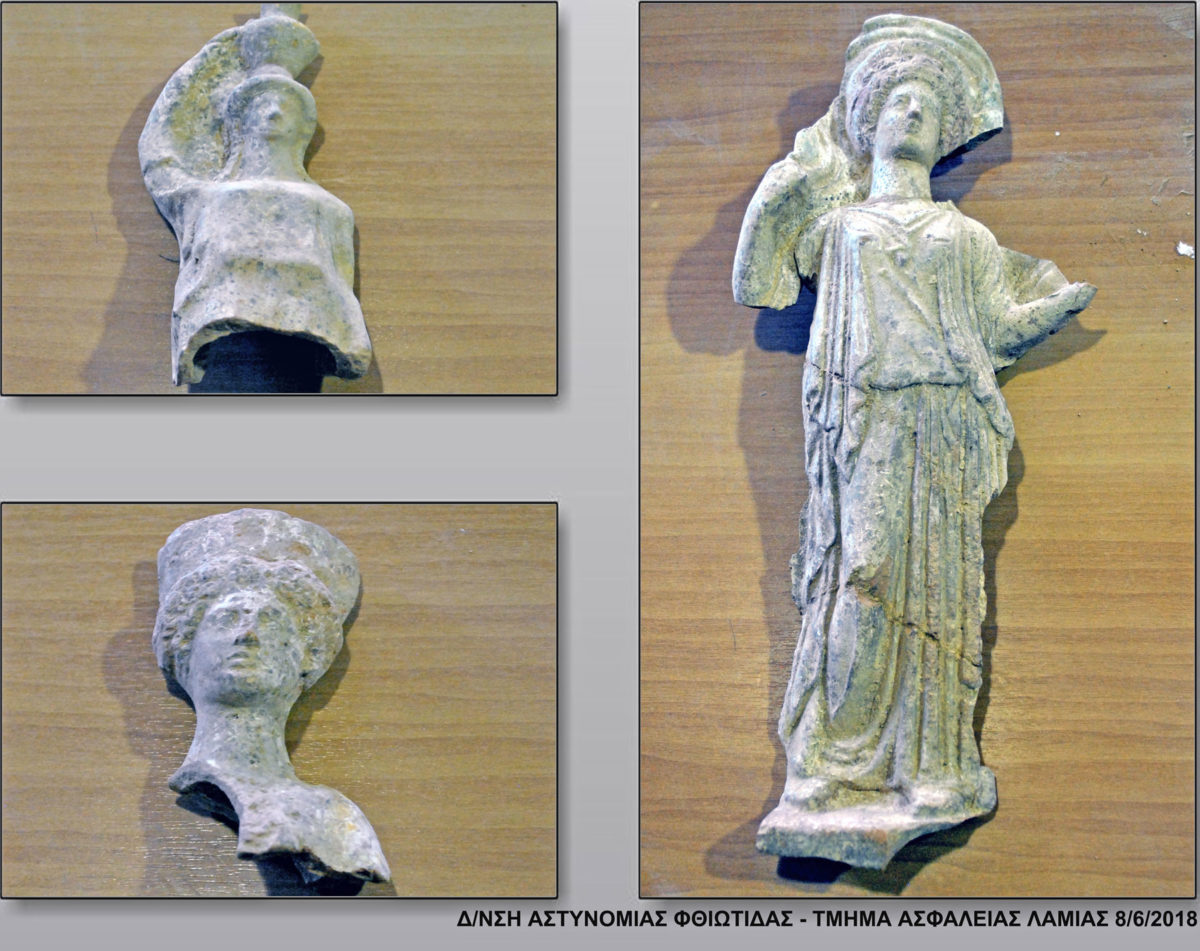 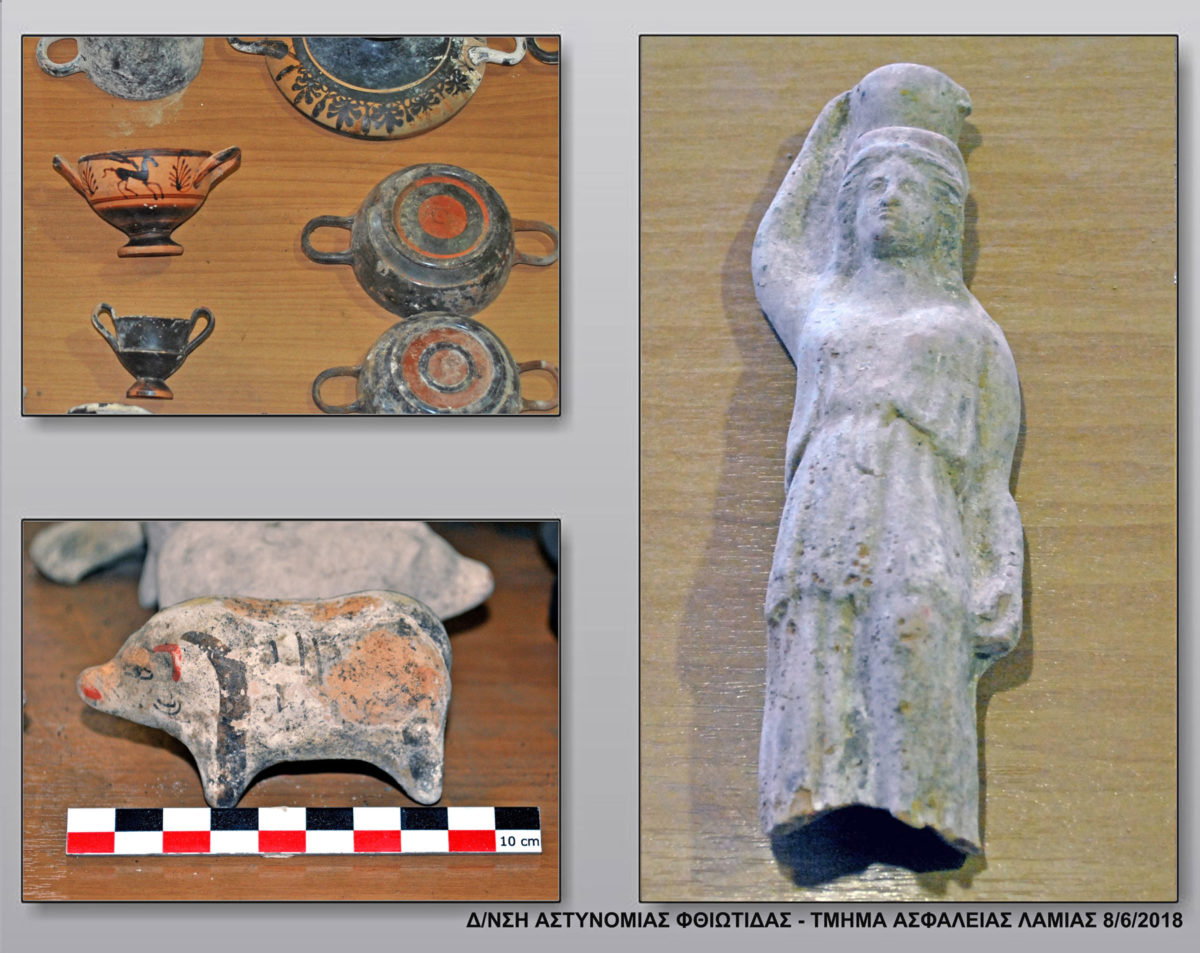 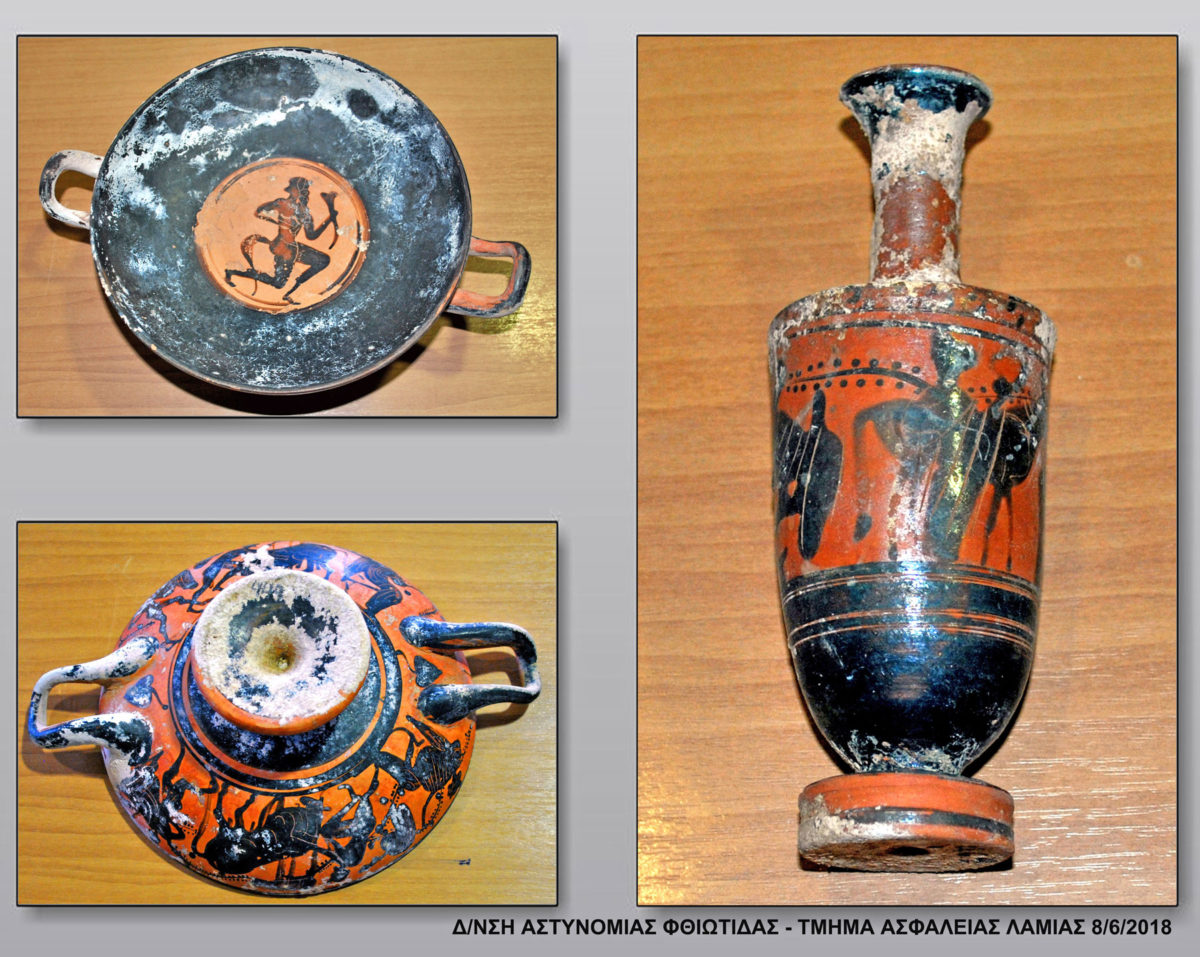 While extinguishing a fire that broke out around noon on June 7 in the Profitis Elias region north of Megaplatanos village and south of Livanates, Locris, a large number of ancient artefacts were found by men of the Regional Fire Service of Central Greece and a team of the 7th Special Unit for Disasters (EMAK) headed by brigadier Nikolaos Spais.

The ancient artefacts were found hidden in bushes in an area of about 150m, placed in plastic bags. Some of the clay artefacts bore traces of soot from the fire, while most were found intact thanks to the timely intervention by the men of the Fire Service. Many of them had been cleaned and partly glued together in situ, as can be seen from relevant equipment found in the place.

Most of the artefacts date from the Classical era (1st half of the 5th c BC). An assemblage of vessels from the Geometric period is also included. Apart from the vessels several bronze bracelets were found, two garment pins, a bronze mirror in fragments and a great number of statuettes, standing male and female figures and several statuettes of animals, pigs, doves etc.

From time to time, illegal excavations occur in the Locris region, for which the Fthiotis and Evritania Ephorate of Antiquities is on the alert. The Ministry of Culture and Sports in collaboration with the law enforcement authorities are already taking all appropriate steps to further investigate this case and locate the perpetrators.

According to an announcement by the Ministry of Culture, the archaeologists of the Fthiotis and Evritania Ephorate of Antiquities counted around 400 complete ancient artefacts (vessels, figurines, animal statuettes and a few bronzes) and a large number of fragments of vessels and statuettes. These are common Locrian types of vessels and statuettes dating mostly from the 5th c BC and come from illegal excavations of a cemetery or cemeteries of the region, confirming the custom, remarked in Locrian funerary assemblages of placing a large number of grave goods, mainly vases, in each burial. The artefacts will be moved during the week from the Police Department of Lamia to the Fthiotis and Evritania Ephorate and after being conserved they will be examined by a special scientific committee that will estimate their monetary value.