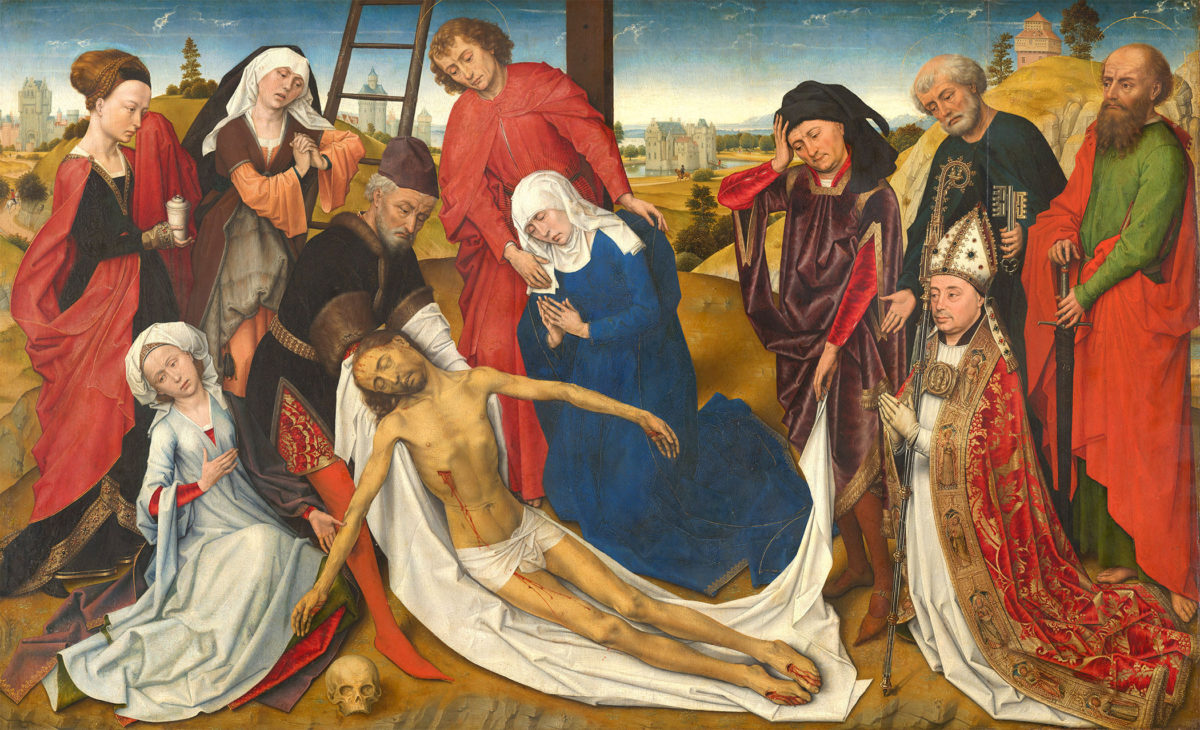 Public Restoration of The Lamentation of Christ in the Mauritshuis

Beginning June 14, 2018, The Lamentation of Christ (c.1460-1464) by Rogier van der Weyden will be restored in a specially built studio in the exhibition space of the Mauritshuis.

The Lamentation is the oldest painting in the Mauritshuis and the only work by the Flemish master in a Dutch museum. Visitors will discover the technical and art historical research into the painting. A rare loan from the Galleria degli Uffizi in Florence will also be on view. Not only will the treatment recover the magnificent colours with which the masterpiece was painted, but the Mauritshuis also expects to learn more about the artwork’s history.

The Lamentation of Christ needs to be restored, because the painting’s varnish has yellowed over the course of many years. As a result, the work’s bright colours no longer come into their own. The treatment will remove previous restorations (retouches), which have also discoloured over time. The restoration, which is expected to be completed at the end of 2018, will reveal the masterpiece’s original, radiant colours.

The project will be carried out in full public view by a team of specialists from the Mauritshuis; it will offer a rare glimpse behind the scenes of a conservation studio. Visitors will be eye-witnesses to the process of restoration and its results. The presentation will offer background about the many aspects of technical research, such as: infrared research (which offers information about, for example, the underdrawing); X-rays; and the analysis of paint samples. The display will also offer arthistorical background about the painting, answering questions such as: who was Rogier van der Weyden and for whom could he have painted this altarpiece?

The Mauritshuis has a venerable tradition of conducting restoration projects in public. Vermeer’s Girl with a Pearl Earring and his View of Delft were both treated in a specially built studio in 1994. Carel Fabritius’s Goldfinch was researched and restored in public in 2004. Jan Steen’s Doctor’s Visit followed in 2011. The Mauritshuis presented the results of a long-term research and restoration project into Rembrandt’s Saul and David in the 2015 exhibition entitled Rembrandt? The Case of Saul and David. In the spring of 2018, Vermeer’s Girl with a Pearl Earring underwent technical research in a temporary studio in the museum’s Golden Room. These projects aim to involve visitors to the Mauritshuis in a crucial, but often hidden, aspect of the museum’s core activities: the care and research of the collection.

The presentation includes a very special loan: Roger van der Weyden’s Entombment of Christ (1460-1464). This painting, from the Galleria degli Uffizi in Florence, will be on show for the first time in the Netherlands. The two altarpieces have only once before been on display together in an exhibition, and then briefly.

The painting technique of the Van der Weyden from the Uffizi is similar to that of the Mauritshuis Lamentation. This is also true for the preparatory drawing under the paint surface. There are also significant differences: the execution and detailing of the Uffizi painting are in some respects more refined. We also know more about the Italian patron of the Van der Weyden from Florence, whereas the donor on the Mauritshuis panel (the kneeling bishop) is still unknown. The comparison of the two works in the presentation will be revealing.

Rogier van der Weyden (1399 – 1464) is considered the most important Flemish painter of his time after Jan van Eyck (1390-1441). Both masters were innovative, mainly due to the development of oil painting. By applying thin layers of transparent oil paint over each other on a light surface, they achieved an unprecedented intensity of colour. The technique also made it possible to paint with a smooth brush, which allowed the Flemish painters to work much more precisely than ever before. They located Biblical scenes in settings from their native countryside, which they depicted with an abundance of naturalistic details. Jan van Eyck was unparalleled in his ability to create his crystal clear images that seem entirely realistic. Rogier van der Weyden added an important element to that naturalism: he painted emotions. His characters are moved to tears, cover their eyes or wring their hands as an expression of grief. Such emotions are very present in the Mauritshuis’s Lamentation.

The Lamentation of Christ

Immediately after the death of Christ, he was taken down from the cross and mourned. At the heart of the image, Mary kneels down in tears with her dead son, supported by the apostle John and surrounded by Biblical figures who were traditionally thought to have been present at that moment. A bishop, who must have commissioned the painting, kneels at the feet of Christ. The Lamentation of Christ takes place in a green, hilly landscape with Jerusalem in the distance. The walled city and the other buildings in the background have little to do with the Holy Land; the gate buildings, the castle with stepped gables and the dovecote on the right look Flemish.

The Lamentation of Christ was purchased in 1827 for 3,000 guilders by order of King William I. It is the only painting by Van der Weyden in a Dutch museum. It was acquired as a work by Hans Memling, but was ultimately attributed to Rogier van der Weyden. As is often the case, the workshop had a large share in the execution of the painting.