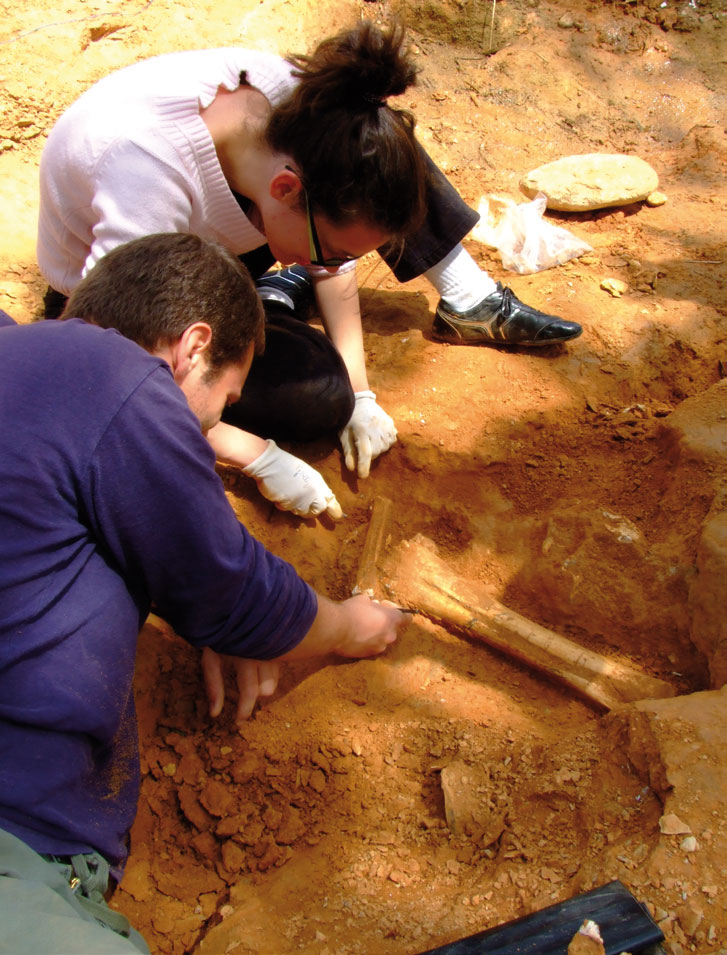 With Dr George Theodorou as its “guide”

In 1835, a few years after the founding of the Greek state, a Bavarian soldier was walking on the banks of the Megalo Rema (Large Stream) of Pikermi, known today as Valanaris. While searching for something to take back home with him, his attention was caught by a hollow white object inside which gleamed large and small crystals. At first he was filled with joy and the certainty of his becoming rich, but then reality struck him.

“These are not diamonds” he is later informed in Munich by the distinguished Professor of Paleontology Johann Andreas Wagner. All the same the crystals of financially worthless calcite were in fact precious in a different way: Having been formed inside the hollowed out bones of long extinct animals, they marked the beginning of one of the greatest paleontological discoveries in the world.

What followed is history: Excavations, discoveries, fame and looting both in the past and in our times (there is no museum of Natural History that does not include at least one fossil from Pikermi). New species are determined and the name of Pikermi is recorded in scientific texts all over the world, while there is a gradual creation of what later comes to be known by foreign scholars as the “Acropolis of Paleontology”.

“Pikermi is extremely rich in finds. The very many names for this science started off here, recorded more than 180 years ago. Thousands of publications refer to Pikermi and its animals. For example, a colleague in Thessaloniki cannot conduct research in Chalkidiki without mentioning the fossils of Pikermi in his comparisons. The same goes for China, Germany, France and Spain”, says Dr George Theodorou, emeritus professor of Paleontology–Stratigraphy at the University of Athens and head of the ongoing excavations at Pikermi, to the Athens and Macedonian News Agency which was fortunate to visit the site.

“The site is particularly rich. We have over 50 different animal species which remind us of an African landscape, a richer one in fact, as we have forms of animals that no longer exist in Africa today”, referring to the latest research that began in 2009 at the site known as Pikermi Valley 1(PV1) which to date has yielded exceptional material. This year’s excavation period started on April 24 and is expected to be completed at the end of June.

“Among these animals are ones with a proboscis, giraffes, rhinos, ponies, hyenas, felines, giant tortoises (found earlier), small tortoises, birds, ostriches, apes such as the Mesopithecus Pentelicus, a very rare fossil, three samples of which we were lucky to find this year”, the professor tells the AMNA, and adds: “This year, from the word go, we had exceptional samples of primates, carnivores etc. The most significant is a skull of the Mesopithecus species. Everything points towards this being one of best preserved fossils found to date in Pikermi, at least in the section we have conserved. The find is a particularly rare species, because it has not become fossilized in large numbers as in the case of the ponies which we find wherever we dig in Pikermi. It is also very rare regarding the state of its preservation”.

What makes Pikermi, however, so exceptional from a paleontological point of view? “Close your eyes and go on an imaginary trip to Africa and whatever you see there you will find in Pikermi. What is more, if you could see  Pikermi of the Miocene age, you would also encounter animals that do not exist in Africa: three metres long tortoises, Ankylotheres, Chalikotheres, four types of giraffe—Africa has two—and many more” says Dr Theodorou about the rich biodiversity of the region that goes beyond the narrow boundaries of today’s Pikermi.

“We are referring in general to the area of today’s Aegean that was once a landmass known as Aegeis. From Greece to Asia Minor we has a continent containing this fauna that included more than 50 animal species”, he describes the fauna of Pikermi that was made up of species living in Aegeis almost 57 million years after dinosaurs became extinct. That was 7 200 000 years ago, as shown by very recent studies.

In fact, as he himself says, “we are also trying to study West Attica, in the area of Aghioi Anargyroi, at Pirgos Vasilissis, where a primate had been already been found long ago, which is of a particular significance in terms of evolution. Naturally we must find more material so as to know how to advance. The primate is a Grecopithecus”. Dr Theodorou does not hide the fact that he wishes to find something similar in Pikermi. As he says to the AMNA, “It is only a breath away chronologically from the finds in Pikermi, about 25,000 years. And of course we do not know how long ago this type of pre human existed.”

Regarding the research being conducted at the moment, he says: “We are advancing with whatever means we possess which unfortunately are insufficient even for a modest excavation, i.e. one that lasts 6 months a year” and he adds “At the moment our funds from the municipality of Rafina and Pikermi are 7,000 Euros gross, i.e. about 5,300 Euros net, with which we have to pay everything. The municipality sometimes manages to give us extra funding. Last year and the year before, there was funding that more than doubled this amount. Of course, if this occurs this year, it will be put to use next year, since we have no time left due to bureaucracy. It is typical that the work we produced in 2010 over a 45 day period of excavations, would take us more than one year today” he says to the AMNA regarding the difficulties encountered by the excavation, which also bring to the forefront the matter of the paleontological park.

“For which no crucial steps have been made that will allow us to make this dream come true. Personally speaking this dream is already over 42 years old”, the professor tells AMNA and adds: “Greek society needs to become aware that such parks do not exist either in Greece or Europe. I cannot say I feel optimistic as I have not seen any decisive steps being made these last few years. In other words, it is not enough for the municipality or some people to want it, first of all it needs to be actively supported by the Administrative Region. I hear announcements by the latter concerning ongoing or future works in East Attica, but absolutely nothing at all about a paleontological park and Pikermi museum”.

“Ιt is two years since a preliminary study was completed which was assigned to an architectural office by the municipality. This study has been handed over by a municipal committee, in which I participated, to the ministry of Culture and the Administrative Region. However, a decision for its realization must first be made or else nothing can go ahead. Let us not forget that we are repeating a proposal made by colleagues back in 1901, i.e. 117 years ago!”, concludes Dr Theodorou.