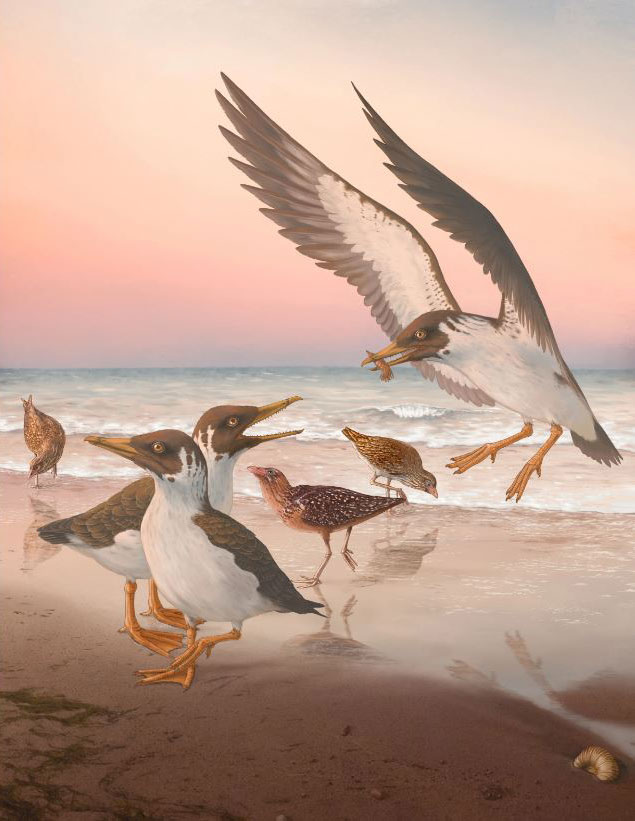 Fossil overturns knowledge about the origin of modern birds

Fossilised fragments of a skeleton, hidden within a rock the size of a grapefruit, have helped upend one of the longest-standing assumptions about the origins of modern birds.

Researchers from the University of Cambridge and the Natuurhistorisch Museum Maastricht found that one of the key skull features that characterises 99% of modern birds – a mobile beak – evolved before the mass extinction event that killed all large dinosaurs, 66 million years ago.

This finding also suggests that the skulls of ostriches, emus and their relatives evolved ‘backwards’, reverting to a more primitive condition after modern birds arose.

Using CT scanning techniques, the Cambridge team identified bones from the palate, or the roof of the mouth, of a new species of large ancient bird, which they named Janavis finalidens. It lived at the very end of the Age of Dinosaurs and was one of the last toothed birds to ever live. The arrangement of its palate bones shows that this ‘dino-bird’ had a mobile, dexterous beak, almost indistinguishable from that of most modern birds.

For more than a century, it had been assumed that the mechanism enabling a mobile beak evolved after the extinction of the dinosaurs. However, the new discovery, reported in the journal Nature, suggests that our understanding of how the modern bird skull came to be needs to be re-evaluated.

All other groups of birds are classified into the neognath, or ‘modern jaw’ group, meaning that their palate bones are connected by a mobile joint. This makes their beaks much more dexterous, helpful for nest-building, grooming, food-gathering, and defence.

The two groups were originally classified by Thomas Huxley, the British biologist known as ‘Darwin’s Bulldog’ for his vocal support of Charles Darwin’s theory of evolution. In 1867, he divided all living birds into either the ‘ancient’ or ‘modern’ jaw groups. Huxley’s assumption was that the ‘ancient’ jaw configuration was the original condition for modern birds, with the ‘modern’ jaw arising later.

“This assumption has been taken as a given ever since,” said Dr Daniel Field from Cambridge’s Department of Earth Sciences, the paper’s senior author. “The main reason this assumption has lasted is that we haven’t had any well-preserved fossil bird palates from the period when modern birds originated.”

The fossil, Janavis, was found in a limestone quarry near the Belgian-Dutch border in the 1990s and was first studied in 2002. It dates from 66.7 million years ago, during the last days of the dinosaurs. Since the fossil is encased in rock, scientists at the time could only base their descriptions on what they could see from the outside. They described the bits of bone sticking out from the rock as fragments of skull and shoulder bones, and put the unremarkable-looking fossil back in storage.

Nearly 20 years later, the fossil was loaned to Field’s group in Cambridge, and Dr Juan Benito, then a PhD student, started giving it another look.

“Since this fossil was first described, we’ve started using CT scanning on fossils, which enables us to see through the rock and view the entire fossil,” said Benito, now a postdoctoral researcher at Cambridge, and the paper’s lead author. “We had high hopes for this fossil – it was originally said to have skull material, which isn’t often preserved, but we couldn’t see anything that looked like it came from a skull in our CT scans, so we gave up and put the fossil aside.”

During the early days of the Covid-19 lockdown, Benito took the fossil out again. “The earlier descriptions of the fossil just didn’t make sense – there was a bone I was really puzzled by. I couldn’t see how what was first described as a shoulder bone could actually be a shoulder bone,” he said.

“It was my first in-person interaction in months: Juan and I had a socially distanced outdoor meeting, and he passed the mystery fossil bone to me,” said Field, who is also the Curator of Ornithology at Cambridge’s Museum of Zoology. “I could see it wasn’t a shoulder bone, but there was something familiar about it.”

“Then we realised we’d seen a similar bone before, in a turkey skull,” said Benito. “And because of the research we do at Cambridge, we happen to have things like turkey skulls in our lab, so we brought one out and the two bones were almost identical.”

The realisation that the bone was a skull bone, and not a shoulder bone, led the researchers to conclude that the unfused ‘modern’ jaw condition, which turkeys share, evolved before the ‘ancient’ jaw condition of ostriches and their relatives. For an unknown reason, the fused palates of ostriches and kin must have evolved at some point after modern birds were already established.

Two of the key characteristics we use to differentiate modern birds from their dinosaur ancestors are a toothless beak and a mobile upper jaw. While Janavis finalidens still had teeth, making it a pre-modern bird, its jaw structure is that of the modern, mobile kind.

“Using geometric analyses, we were able to show that the shape of the fossil palate bone was extremely similar to those of living chickens and ducks” said Pei-Chen Kuo, a co-author of the study. Added co-author Klara Widrig: “Surprisingly, the bird palate bones that are the least similar to that of Janavis are from ostriches and their kin.” Both Kuo and Widrig are PhD students in Field’s lab at Cambridge.

“Evolution doesn’t happen in a straight line,” said Field. “This fossil shows that the mobile beak – a condition we had always thought post-dated the origin of modern birds, actually evolved before modern birds existed. We’ve been completely backwards in our assumptions of how the modern bird skull evolved for well over a century.”

The researchers say that while this discovery does not mean that the entire bird family tree needs to be redrawn, it does rewrite our understanding of a key evolutionary feature of modern birds.

And what happened to Janavis finalidens? It, like the large dinosaurs and other toothed birds, did not survive the mass extinction event at the end of the Cretaceous period. The researchers say that this may be because of its large size: Janavis weighed around 1.5 kilograms and was the size of a modern vulture. It’s likely that smaller animals – like the ‘wonderchicken’, identified by Field, Benito, and colleagues in 2020, which comes from the same area and lived alongside Janavis – had an advantage at this point in Earth’s history since they had to eat less to survive. This would have been beneficial after the asteroid struck the Earth and disrupted global food chains.

The research was supported in part by the American Ornithological Society, the Jurassic Foundation, the Paleontological Society, and UK Research and Innovation (UKRI). Daniel Field is a Fellow of Christ’s College, Cambridge.