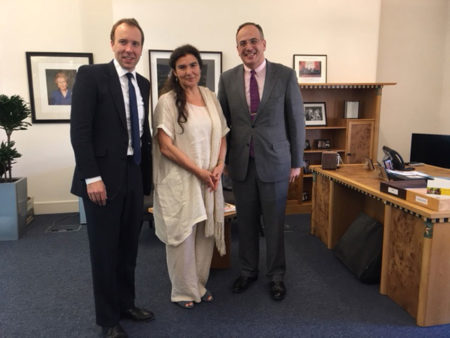 Meeting of the Minister of Culture with her counterpart in London

The focus was on all issues of bilateral cultural co-operation

On her visit to London, Minister for Culture and Sport Mrs. Lydia Koniordou met as scheduled with her counterpart Mr. Hancock and the undersecretary in matters of culture Mr. Ellis.

During the meeting, all issues of bilateral cultural co-operation were discussed, in a spirit of reciprocity, focusing on modern culture, particularly on cultural exchange issues, on  co-productions, on greater mobility among artists, and on recent initiatives taken to make Greece a country-friendly towards filming.

The Minister for Culture raised the question to the British side of the reunification of the Parthenon Sculptures, focusing on the need to intensify the dialogue between the two sides at a political level, highlighting the cultural and ethical dimensions of the issue, in line with the recent recommendation the UNESCO Intergovernmental Panel (ICPRCP). Finally, she did not fail to emphasize that public opinion is increasingly in favour of the reunification of the sculptures.

In a celebration of 100-years of the Koraes Chair at Kings College London, the Minister for Culture brought the event to a close with the following address: “Chairs for Modern Greek studies abroad constitute a key area of great importance. This is not due to their educational significance alone. Scholars of Modern Greek are a passport for our cultural policies abroad. They are one of the most important two-way communication channels in the making of modern culture “. Mrs. Koniordou stated that “Modern Greek studies are not a luxury but a necessity and must be addressed as such”. And she  added: “I want to express my great pleasure in the fact that recently and following the mobilization of institutions, bodies and individual expatriates, sufficient funding was secured for the long-term operation of the Koraes chair.”

On the second day of her visit, the Minister met with Andrew Jones, the British Council Senior Programme Manager for Theatre and Dance in Europe. During an extremely productive discussion, a multi-level cooperation was agreed on in the area of the arts and in the field of culture professionals.

Mrs Koniordou then met at the Ambassador’s residence with the British Committee for the Reunification of Parthenon Marbles, where she was informed of its activities to date and future actions were discussed. Finally, the Minister met with a group of Greek and British theatre artists.