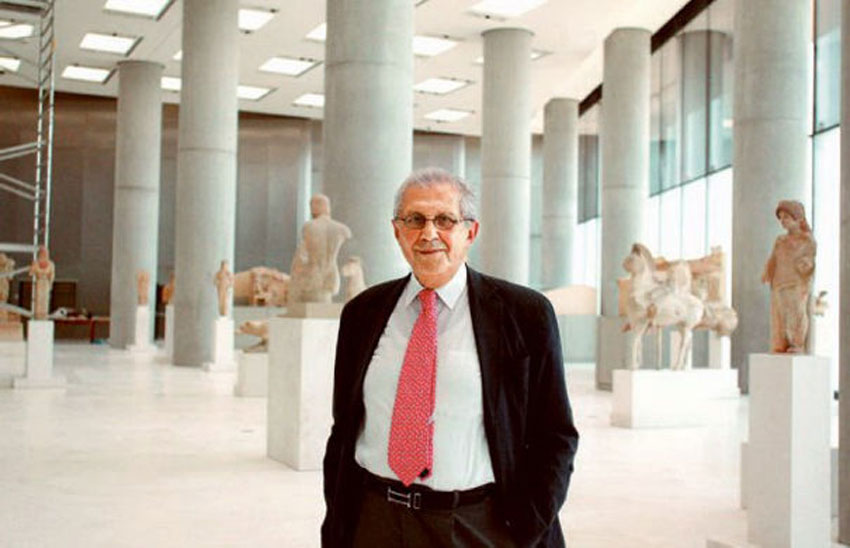 Last year it was visited by more than 1,6 million people

More than 1,6 million people (a total of 1,666,286) visited the Acropolis Museum over the last year, i.e. from June 2017 to May 2018. “The number of visitors increased considerably last year. With one significant difference: The number of English speakers is almost equal to that of the Greek, i.e. about 300,000. The number of Greeks did not fall but the number of foreigners went up considerably. As is the case every year, the English speakers are followed by the French and the number of Chinese has risen significantly, which also explains, among other things, the efforts we are making with an important collaboration with the Museums of Shanghai and the Forbidden City in Beijing”. This was announced by the Director of the Acropolis Museum, Dimitris Pantermalis, on the day of the Museum’s ninth birthday.

Mr Pantermalis also spoke about the next period. Specifically, he referred to two important events that, if all goes well, will be inaugurated on the Acropolis Museum‘s celebratory 10th anniversary:  The highlighting of the excavation and its movable finds in an exhibition area that will operate below the level of the building as well as the ambitious “Creating a Digital Acropolis Museum” project.

“The presentation of the actual excavation and part of its movable finds is unique. We are now in the construction phase and our key wish is for the visitor to be able to tour the site on one level. That is why a large platform will be constructed as well as a series of catwalks, so one can move among the ruins of the excavation almost completely without the use of steps, ramps etc.” said the Museum’s Director. As he noted, “In an asymmetrical space with its own particular variety of levels, what one adds for the visitor’s convenience should be strictly geometrical, echoing the Museum’s geometric supports that are directly above. Thus a balance is achieved between the ancient and modern”.

The second major event expected on the Museum’s next birthday is the “Creating a Digital Acropolis Museum” project which is advancing rapidly.‟This entails very many digital applications; the Museum being updated with more digital means. There must be over 25-27 applications that will be realized at this time next year” announced Mr. Pantermalis, pointing out that the Digital Acropolis Museum “will be largely on line, its content will be accessible to a larger public while there will be very many applications in the Museum itself, addressed to all visitors and particularly to the young”.

Mr. Pantermalis also referred to the Museum’s two important temporary exhibitions of the last year. “Emotions” presented the first time by the Onassis Foundation in New York and exhibited again in a new setting at the Acropolis Museum.

“We insisted on presenting the emotions as they are depicted in the works of art because we do not have the people and we cannot exhibit the texts that refer to the emotions. What we can do in a museum is to see how the artist depicted emotions on monuments in different eras of ancient art” stated Mr. Pantermalis.

The other exhibition that will be over in a few days is of Eleusina and the great mysteries that took place there. “In it we put into practice our view that when an exhibition is associated with a specific archaeological site it should present that site but also give an idea of the natural surroundings. Because all these things, the historical and natural environment, the archaeological site, the buildings, the ancient and movable finds, are a unity. This is an advantage we do not make the most of in our country.This is what differentiates us from museums abroad, which usually enrich their collections with acquisitions of questionable origin from around the world. Here we have this possibility; i.e. an authentic relationship between the museum and the finds which is extremely interesting for today’s visitor and is also scientifically correct. Because each find is also mentioned in the specific place it was discovered during excavations”, he added.

Last, Mr. Pantermalis talked about the big exhibition that will be realized in collaboration with the Museum of the Forbidden City of Beijing, and expected to open in mid September. “For the first time, three royal apartments will be moved to the Acropolis Museum, complete with their equipment, organization and contents. They will be set up so that one can get a sense of this great period in 18th century China and of the Εmperor Qianlong who was an important ruler who combined major reforms and an enormous effort to unite the Chinese empire by artistic endeavours. He himself was an artist; he painted, wrote poetry (he supposedly wrote more than 10,000 poems), organized an artists’ workshop at his court and at the same time was a great collector of his country’s artistic produce from very ancient times to his day” said the Director of the Acropolis Museum about the much anticipated exhibition.