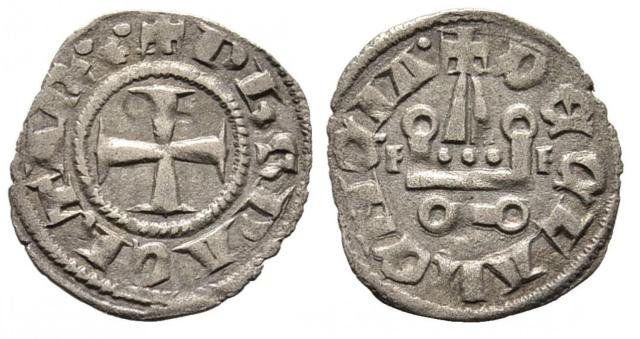 The Regional Museum of History announced

A hoard of seven silver coins minted in the Principality of Achaea, or Morea, has been discovered by archaeologists in the Rusocastro Fortress in Southeast Bulgaria.

The Rusocastro Fortress is best known for the Battle of Rusocastro in 1332 AD. It was the last big military victory of the medieval Bulgarian Empire before it was conquered by the invading Ottoman Turks at the end of the 14th century.

It says the silver coins in question are known as tornese (or tornesel), colloqually known as groschen.

The Principality of Achaea

The Principality of Achaea / Morea was established on the Peloponnese Peninsula in today’s Southern Greece in 1205, after in 1204 the Crusader knights from the 4th Crusade captured and plundered Byzantium’s capital Constantinople.

They replaced the Byzantine Empire with what became known as the Latin Empire (of Constantinople) (1204–1261) on part of the Byzantine territories, with the Kingdom of Thessalonica (Thessaloniki), the Duchy of Athens (silver coins from the Duchy of Athens were found in Rusocastro in 2017), and the Principality of Achaea (Morea) becoming its Western European-type vassal states.

The former Byzantine territories, which were not conquered by the Crusaders, gave birth to three Byzantine successor states – the Despotate of Epirus, the Empire of Trebizund, and the Empire of Nicaea, which the third one eventually managing to restore the Byzantine Empire in 1261 by reconquering Constantinople.

The Second Bulgarian Empire (1185–1396 / 1422), which saw its height in the first half of the 13th century, for the most part had stormy relations with the Latin Empire of the Western European Crusaders, the most notable example being the 1205 Battle of Adrianople in which the Bulgarian Tsar Kaloyan (r. 1197–1207) routed the Crusaders and even captured alive the first Latin Emperor of Constantinople, Baldwin I of Flanders.

The Principality of Achaea (Morea) itself was established in 1205 by French knights from the 4th Crusade William I of Champlitte and Geoffrey I of Villehardouin who set out to conquer the Peloponnese Peninsula in today’s Southern Greece on behalf of Boniface I of Montferrat, the King of the Kingdom of Thessalonica (Thessaloniki).

The seven tornese silver coins from the Principality of Achaea discovered in the Rusocastro Fortress in Southeast Bulgaria were discovered together. Each of them weighs about 0.9 grams.

Their obverse features a cross with four equal arms, and their reverse depicts a tower of a Catholic cathedral, the Burgas Museum explains.

“The treasure [the tornese silver coin hoard from the Rusocastro Fortress] has been discovered during the excavations of a palace-type monumental building which is 20 meters (appr. 60 feet) long and 8 meters (appr. 24 feet) wide, in which three massive stone columns were erected to support arches as well as a second floor,” the Museum reveals.