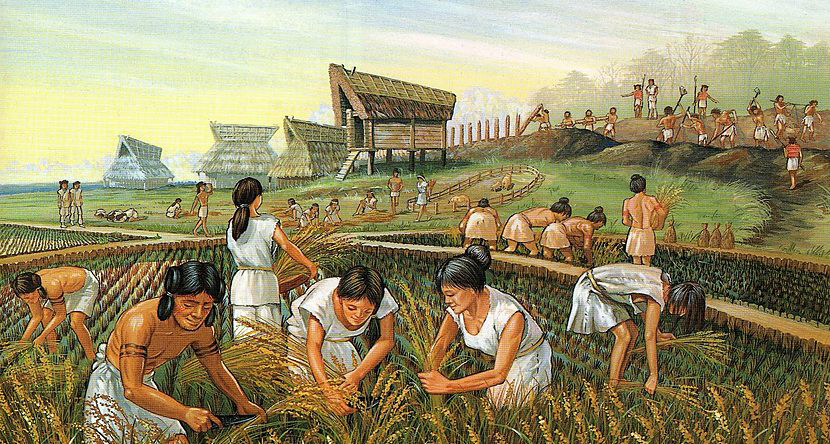 Millennia ago, ancient farmers cleared land to plant wheat and maize, potatoes and squash. They flooded fields to grow rice. They began to raise livestock. And unknowingly, they may have been fundamentally altering the climate of Earth.

A study published in the journal Scientific Reports provides new evidence that ancient farming practices led to a rise in the atmospheric emission of the heat-trapping gases carbon dioxide and methane — a rise that has continued since, unlike the trend at any other time in Earth’s geologic history.

It also shows that without this human influence, by the start of the Industrial Revolution, the planet would have likely been headed for another ice age.

“Had it not been for early agriculture, Earth’s climate would be significantly cooler today,” says lead author, Stephen Vavrus, a senior scientist in the University of Wisconsin-Madison Center for Climatic Research in the Nelson Institute for Environmental Studies. “The ancient roots of farming produced enough carbon dioxide and methane to influence the environment.”

The findings are based on a sophisticated climate model that compared our current geologic time period, called the Holocene, to a similar period 800,000 years ago. They show the earlier period, called MIS19, was already 2.3 degrees Fahrenheit (1.3 C) cooler globally than the equivalent time in the Holocene, around the year 1850. This effect would have been more pronounced in the Arctic, where the model shows temperatures were 9-to-11 degrees Fahrenheit colder.

Using climate reconstructions based on ice core data, the model also showed that while MIS19 and the Holocene began with similar carbon dioxide and methane concentrations, MIS19 saw an overall steady drop in both greenhouse gases while the Holocene reversed direction 5,000 years ago, hitting peak concentrations of both gases by 1850. The researchers deliberately cut the model off at the start of the Industrial Revolution, when sources of greenhouse gas emissions became much more numerous.

For most of Earth’s 4.5-billion-year history, its climate has largely been determined by a natural phenomenon known as Milankovitch cycles, periodic changes in the shape of Earth’s orbit around the sun — which fluctuates from more circular to more elliptical — and the way Earth wobbles and tilts on its axis.

Astronomers can calculate these cycles with precision and they can also be observed in the geological and paleoecological records. The cycles influence where sunlight is distributed on the planet, leading to cold glacial periods or ice ages as well as warmer interglacial periods. The last glacial period ended roughly 12,000 years ago and Earth has since been in the Holocene, an interglacial period. The Holocene and MIS19 share similar Milankovitch cycle characteristics.

All other interglacial periods scientists have studied, including MIS19, begin with higher levels of carbon dioxide and methane, which gradually decline over thousands of years, leading to cooler conditions on Earth. Ultimately, conditions cool to a point where glaciation begins.

Fifteen years ago, study co-author William Ruddiman, emeritus paleoclimatologist at the University of Virginia, was studying methane and carbon dioxide trapped in Antarctic ice going back tens of thousands of years when he observed something unusual.

Ruddiman named this the Early Anthropogenic Hypothesis and a number of studies have recently emerged suggesting its plausibility. They document widespread deforestation in Europe beginning around 6,000 years ago, the emergence of large farming settlements in China 7,000 years ago, plus the spread of rice paddies — robust sources of methane – throughout northeast Asia by 5,000 years ago.

Ruddiman and others have also been working to test the hypothesis. He has collaborated with Vavrus, an expert in climate modeling, for many years and their newest study used the Community Climate System Model 4 to simulate what would have happened in the Holocene if not for human agriculture. It offers higher resolution than climate models the team has used previously and provides new insights into the physical processes underlying glaciation.

For instance, in a simulation of MIS19, glaciation began with strong cooling in the Arctic and subsequent expansion of sea ice and year-round snow cover. The model showed this beginning in an area known as the Canadian archipelago, which includes Baffin Island, where summer temperatures dropped by more than 5 degrees Fahrenheit.
“This is consistent with geologic evidence,” says Vavrus.

Today, the Arctic is warming. But before we laud ancient farmers for staving off a global chill, Vavrus and Ruddiman caution that this fundamental alteration to our global climate cycle is uncharted territory.

“People say (our work) sends the wrong message, but science takes you where it takes you,” says Vavrus. “Things are so far out of whack now, the last 2,000 years have been so outside the natural bounds, we are so far beyond what is natural.”

The reality is, we don’t know what happens next. And glaciers have long served as Earth’s predominant source of freshwater.

“There is pretty good agreement in the community of climate scientists that we have stopped the next glaciation for the long, foreseeable future, because even if we stopped putting carbon dioxide into the atmosphere, what we have now would linger,” says Ruddiman. “The phenomenal fact is, we have maybe stopped the major cycle of Earth’s climate and we are stuck in a warmer and warmer and warmer interglacial.”