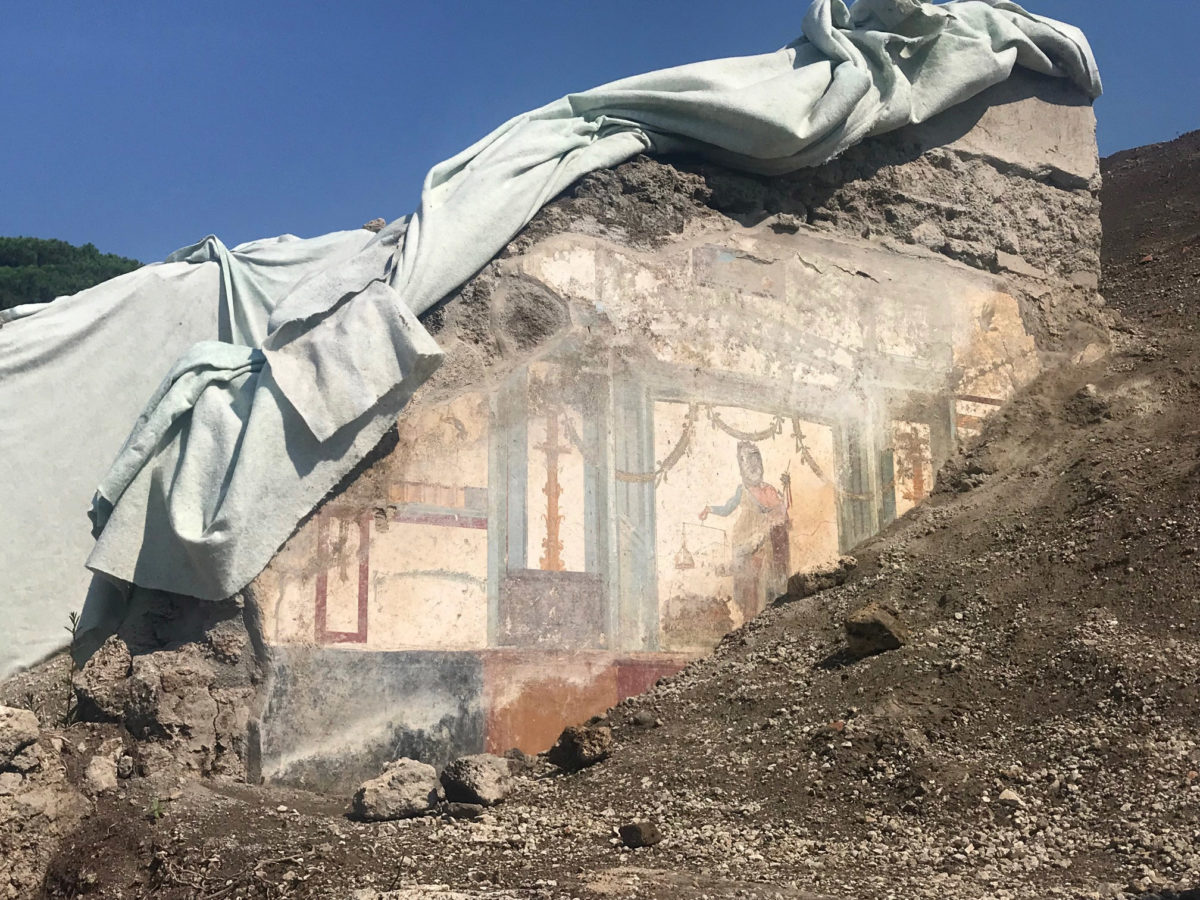 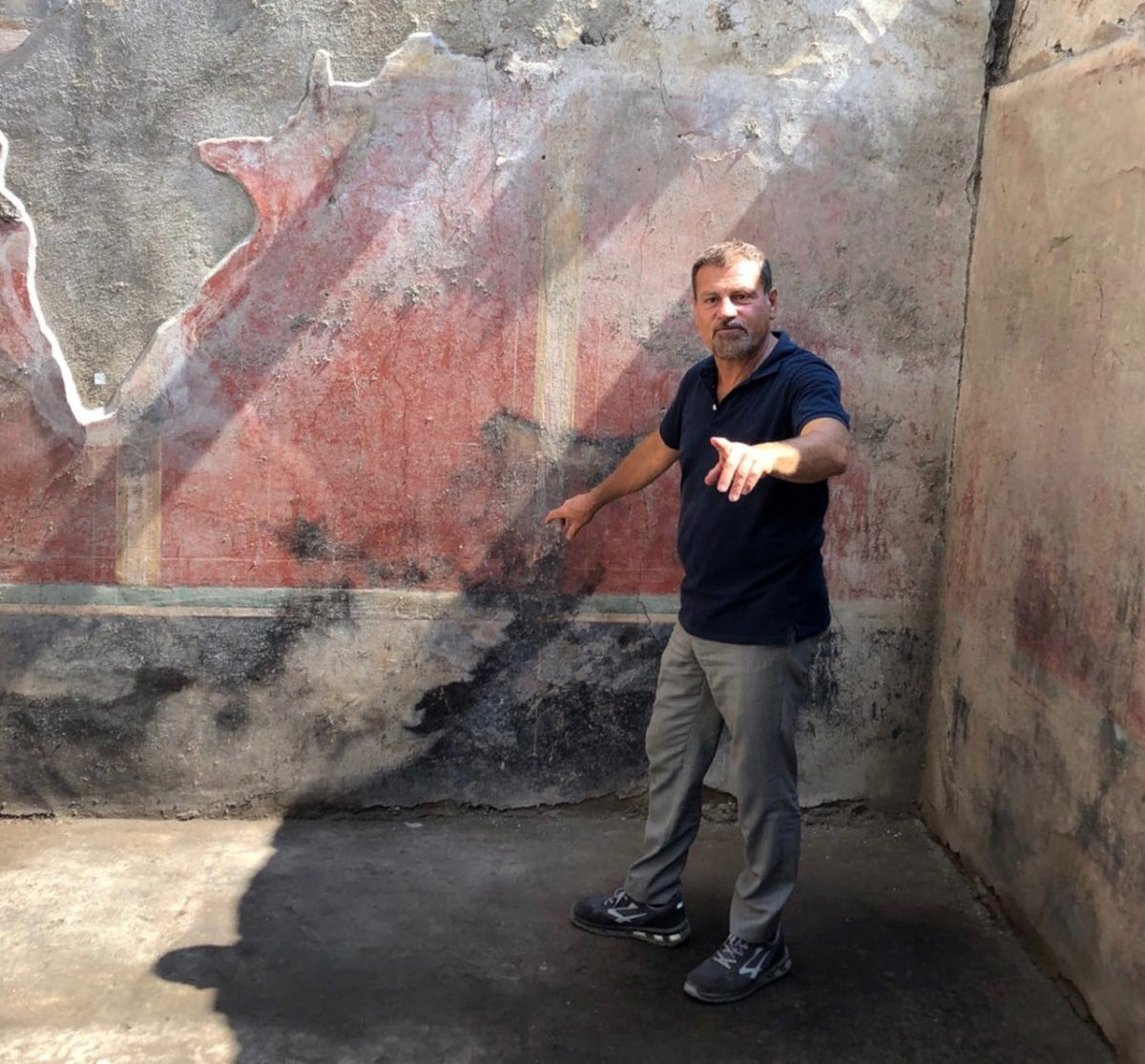 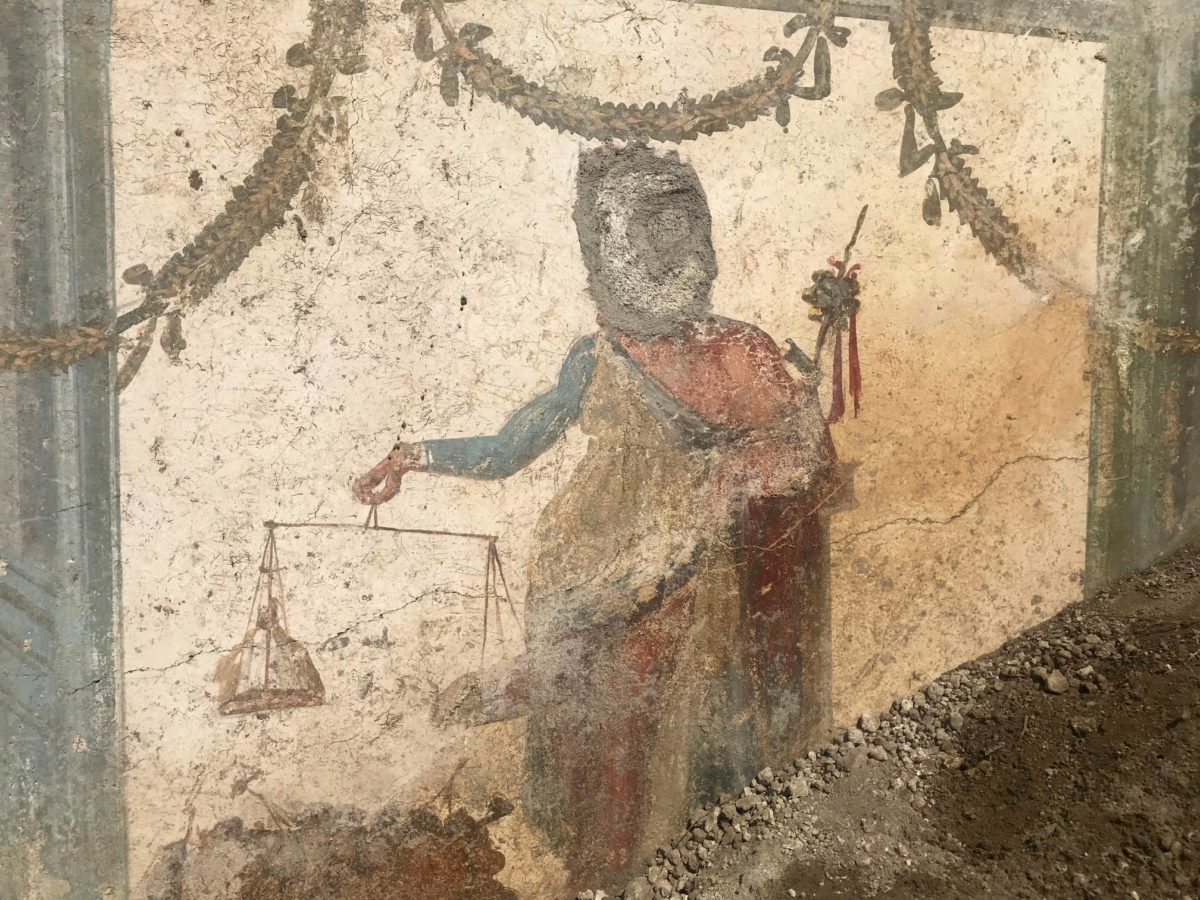 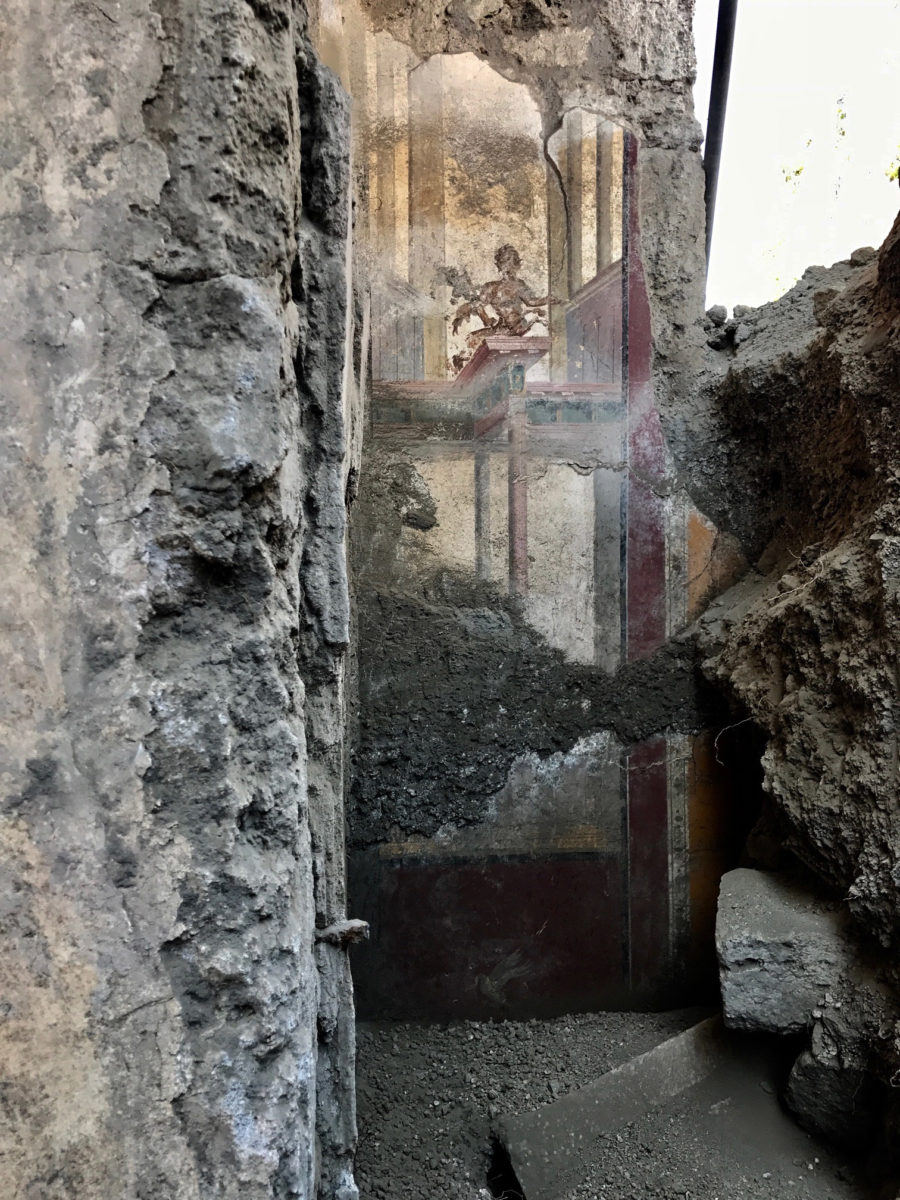 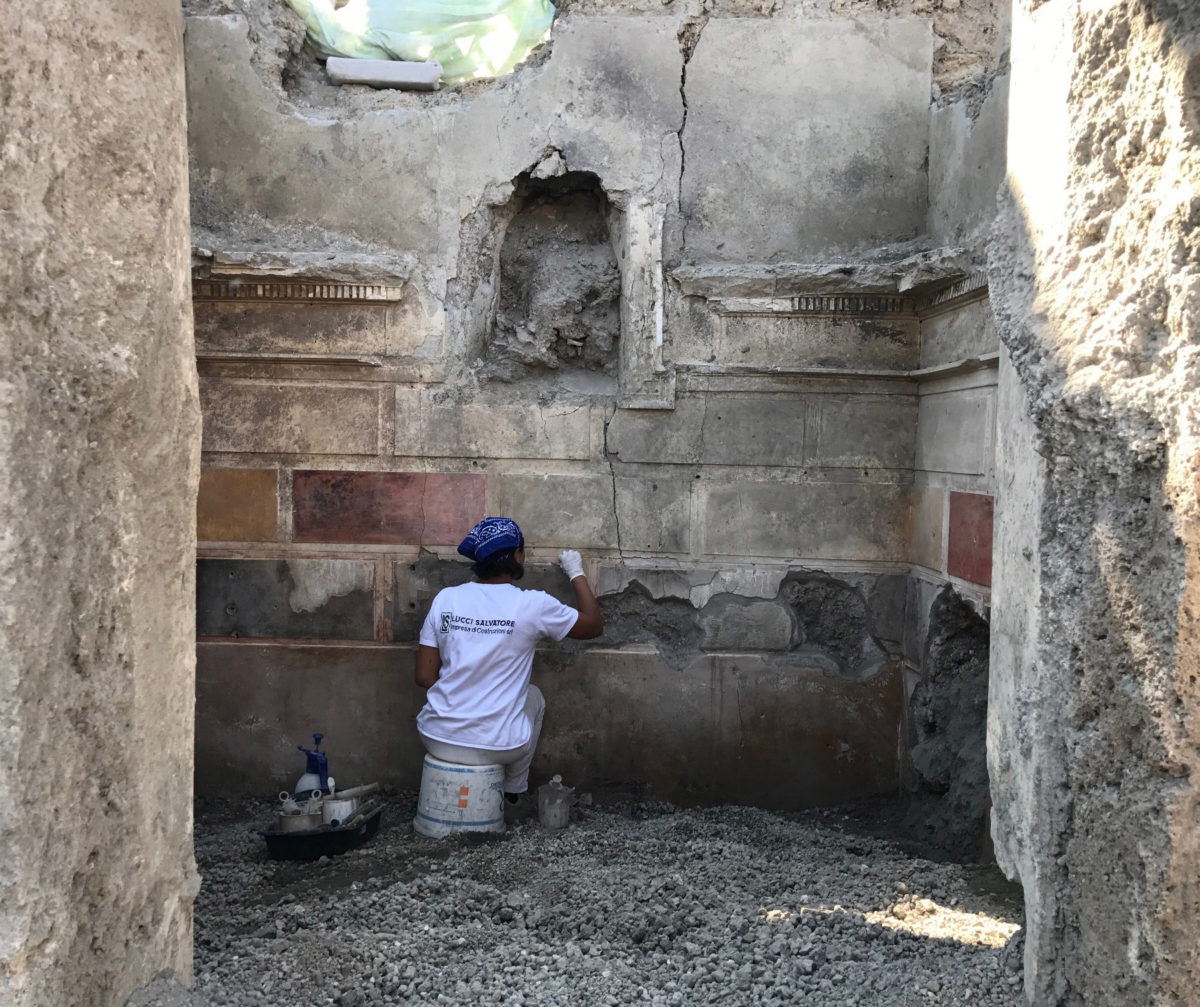 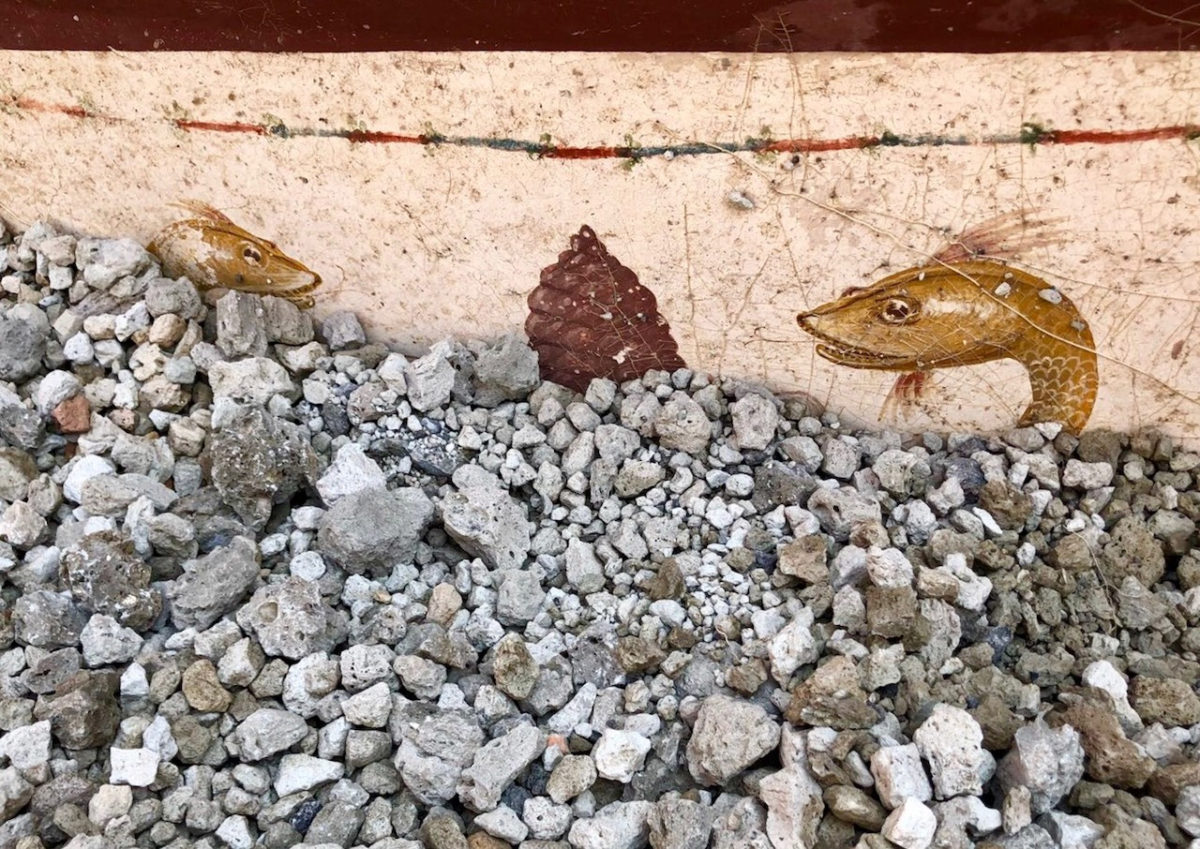 Pompeii and Delos come closer together

Pompeii and Delos; two unique archaeological sites and monuments on the UNESCO World Heritage list, come closer to one another through a collaboration which started recently between the Ephorate of Antiquities of the Cyclades and the Pompeii Archaeological Park. This important synergy not only includes the “voyage” of the jewelry exhibition “Vanity: Stories of Jewelry in the Cyclades” to the city with the catastrophic end (as we know, Pompeii was covered in volcanic matter and ash when Vesuvius erupted in 79 AD) but also exchanges of expertise as part of a groundbreaking programme that sees the ancient city holistically.

The heads of the two services, director of the Ephorate of Antiquities of the Cyclades, Dimitris Athanasoulis and director of Pompeii Archaeological Park Massimo Osanna talked to the Athens and Macedonian News Agency on all the above. At the same time, the Italian archaeologist also spoke about the new discoveries at Pompeii that stand out for being well preserved and also for their proper documentation which was absent from earlier ones.

“I made my acquaintance with Massimo Osanna through the French School at Athens and its director Alexandre Farnoux. We have an excellent collaboration because of our common approach, which is to place emphasis on the upgrading of archeological sites with policies that will attract the greatest number of visitors” said Mr. Athanasoulis to the AMNA, further explaining: ‟We decided on a model of collaboration between two regional services; the Pompeii Archaeological Park from Italy and the Ephorate of Antiquities of the Cyclades from the Archaeological Service of Greece. It is the first time that two regional services are working together on all the range of their activities, i.e. from research to promotion, which I think is very interesting”.

In this context, it was decided to transfer a modified version of the “Vanity” exhibition to Pompeii while, as the Greek Curator informed the AMNA, the two services will  also collaborate on the exhibition to be held in Rome on the Cities of Volcanoes, such as the two most important cities in the Mediterranean; the Prehistoric Akrotiri of Thera and Roman Pompeii.

As part of the collaboration, joint teams will be created for restoration work on Delos and in Italy, for there to be an exchange of experience which is a very important fact, points out Mr. Athanasoulis adding “We shall also get involved there with the conservation of a cave with frescoes”.

For his part, Mr. Osanna spoke to the AMNA about the “Vanity” exhibition which will be transferred to Pompeii. “The plan is for it to open around Christmas. We are working with Greek colleagues on this exhibition that was held at the Archaeological Museum of Mykonos, but in a different context. We want to compare Greek and Roman jewelry through time “noted the Italian archaeologist pointing out that in Mykonos the jewelry exhibited was from the 2nd millennium BC to the present day. ‟We also wish to convey this ‘timeless’ dimension of jewelry, and this is possible since the history of Pompeii begins around the 7th c. BC. One more important element emerging from this collaboration is comparing two regions of the Mediterranean, through which one can find many similarities between the Aegean and the Tyrrhenian seas” he said.

He did not omit to mention what attracted him from the start in the “Vanity” exhibition: “There were two things. One was the layout, i.e. how one can exhibit all these artefacts in a museum. The display cases and the layout’s architecture in general was very interesting; the whole project was very modern and elegant. We wanted, therefore, to present this part of the exhibition in this modern way as if it were a presentation by Bulgari for example. Naturally for me as an archaeologist it was particularly interesting to see all those artefacts in an exhibition covering a period from the 2nd millennium BC up to the 1st millennium AD. It is a marvelous way of narrating history and the evolution of jewelry through time”.

Regarding his collaboration with the Ephorate of Antiquities of the Cyclades on Delos, Mr. Osanna said: “It is very significant because Greece and Italy have the same problems in conservation and restoration, the same research approach and interpretation of the past. Consequently, it was very important for Mr. Athanasoulis and me that Greece and Italy are collaborating on programmes conserving cultural heritage”. Why are you beginning with Delos? “Because it needs a very big conservation programme, like the one we are following in Pompeii, thanks to European funding. It is a huge programme that we began last year and which is truly revolutionary for Pompeii” he stressed.

The two archaeologists referred to the innovative dimension of this programme. “Pompeii was in a very bad state and it was decided to implement an extensive programme of renovation with a large budget that approaches the archaeological site holistically. The equivalent is also being planned for Delos, i.e. we are approaching the enhancement of the archaeological site holistically; both as a sanctuary and a city. From then on we shall make a strategic plan and depending on the funding will implement parts of it, which nevertheless will already be more complete and our intervention not so fragmentary”, said Mr. Athanasoulis.

For his part Mr. Osanna pointed out when speaking to the AMNA that “In Pompeii we approach the city as a city. I.e. the programme we follow does not concern one house or a part of it, but the entire city. This means preserving everything, making everything comprehensible, opening all the streets and houses that were shut and above all not losing any archaeological material like wall paintings for example. In this context, Greek and French colleagues recently came to Pompeii to study our big programme of conservation and restoration”.

Regarding Delos, Mr. Osanna added that a memorandum has already been signed ‟of collaboration between the Ephorate of Antiquities of the Cyclades and the Pompeii Archaeological Park so as to share expertise on issues of conservation. In this context and given the impossibility of implementing such a programme without important research preceding it both in Italy and the Cyclades, we are organizing joint research programmes, such as a survey on the island of Reneia opposite Delos, which is a wonderful archaeological site that has not however been researched systematically. Next we shall go ahead with a restoration programme. For example, we are thinking of beginning the restoration of the House of Masks on Delos next October” said the Italian archaeologist to the AMNA, stressing that it is a very interesting collaboration ‟because in antiquity the ties between Italy and Delos were very strong. Delos was the most important port of the Mediterranean in the 2nd c. BC and many people from Campania, Napoli and Pompeii came here mainly for reasons of trade”.

Regarding the raising of money for the programme, Mr. Athanasoulis announced to the AMNA that it will be tried out through crowdfunding, while searching for sponsors in Greece and abroad, also with the help of the French School. ‟To my mind the great benefit comes from the collaboration between specialist scientists, archaeologists, architects and conservators of both services because both sides will acquire experience and expertise” explained the Greek Curator of Antiquities. “We don’t just want European money but European collaboration as well. We believe a lot in this approach”, added Mr. Osanna referring to the partnership between Greece, Italy and France.

What do we know however about Pompeii, an archaeological site with an area of 66 hectares of which 44 have been excavated? Is it perhaps a Greek colony, as has been suggested by many in the past?

“The origins of Pompeii have been discussed at length since the 19th century. There are scholars who say it was an Italian city, others that it was Greek and some Etruscan. During research this last year, amazing data was located connected to its founding and now it is my opinion that Pompeii was an Etruscan city. It is however significant that Pompeii of the 7th and 6th c. BC was an open community and that those who founded it had very strong cultural ties with Greece. We have stylistic traces in the architecture of the buildings that show this link between Etruscan families of Pompeii and Greek architects and craftsmen who came from Italy’s Greek colonies”, said Mr. Osanna to the AMNA.

As to the excavations of the city, he himself noted that “Pompeii was discovered in the mid-18th century and excavations have been conducted since then to the present day. This last year we have begun new research while simultaneously carrying out the conservation programme. Moreover, for the first time we are in a position of having reliable documentation of Pompeii’s excavations, i.e. to know the exact spot each artifact was found. The excavations of the last century, in the 1960s for example, had not been very well documented. Now the situation is entirely different”, he clarified.

He explains what has impressed him most in the recent research: “We excavate streets with houses on either side of them. This means we have found furniture, vases and wall paintings in a wonderful state of preservation. We find all artefacts in their proper place inside the rooms and this is very significant. Because, as I told you, the archaeological context is missing from many objects already excavated in the 19th century and exhibited today in the Museum of Naples. We do not know where they were found. It is vital this context should exist and that we should “read” it properly if we wish to understand the ancient society.It is therefore a first-class opportunity to have this extraordinary documentation and reconstruction of the entire archaeological context for the first time,” he concluded in his talk to the AMNA.