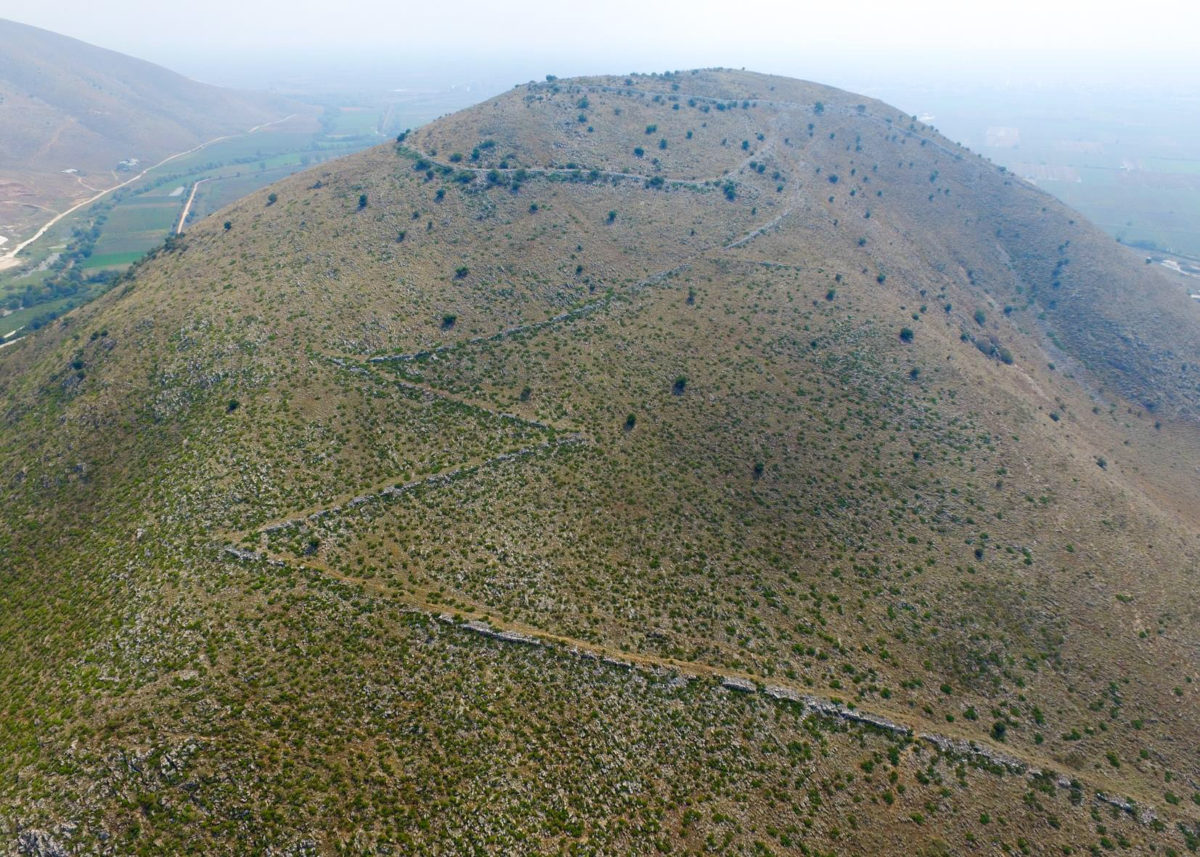 Vlochos: Ruins of a city scattered atop a hill

Results of a 3-year excavation programme

“Part of a red figure vase dating from the end of the 6th c. BC was located from the first habitation. It depicts a nude youth facing right and was probably made in the workshop of the Painter Paseas in Attica in 520-510 BC.  Vases of this type are usually costly imports and reveal their owner’s wealth”.

About twenty archaeologists and students from Greece, Sweden and the UK worked as a team on the site. Work was focused on Vlochos, a declared archaeological site, extending to the top and the immediate slopes of “Strongylovouni”, an isolated hill in the northeast corner of the western plain of Thessaly. The site is just south of today’s village of Vlochos and is a focal point in the plain of Thessaly as a whole.

The programme’s aim is to provide a more complete understanding of the ancient city by recording its architectural remains, thoroughly cleaning it and exploring it through time. The results of the research to date, according to the archeologist, suggest four phases in the site’s use: First phase: end of 6th c. BC (Archaic period), second phase: 5th, 4th, 3rd c. BC (Classical and Hellenistic periods), third phase: 2nd-4th c. AD (Late Roman period), fourth phase: 5th-6th c. AD (Early Byzantine era).

The first phase includes the Acropolis and the two configurated roads that followed a zig zag route from the plain to the top of the hill. The roads were monumental. They were almost 5m wide and their outer side was reinforced by a wall. We do not have sufficient clues as to when the acropolis and the two roads were constructed; the manner of their construction however places them towards the end of the 6th c. BC, i.e. around 500 BC, noted Mrs. Tsiouka.

The most important archaeological finds preserved on Strongylovouni hill and on the plains belong to the second phase. Many of them are still visible; nevertheless, the appearance of the city during the Classical and Hellenistic period was very different. According to the archaeologist, the city whose name we still do not know, was exceptionally big and protected by strong fortifications with high walls and towers, while the entrance to its interior was through controlled fortified gates. The urban fabric extended to the present location of Patoma and included houses divided into blocks, streets and squares. A big road, 8 metres wide, crossed the city from east to west and many small roads converged vertically onto it. The city’s growth followed the landscape’s geo relief at that time.

In this second phase, a new fortified acropolis with towers was built inside which enclosed a handful of buildings. A large building was located; possibly a house with a walled courtyard as well as a few small houses. The archaeologist points out that perhaps all these constructions were intended to house the garrison that oversaw the city from above and that the acropolis was used exclusively for guarding the city and its inhabitants. Undoubtedly the acropolis stood out from a distance and essentially dominated the flat plain of Thessaly.

As the archaeologist explained, the clues that can confirm the history and the exact dating of the city are, as yet, limited. Nevertheless, she adds, it is possible that the city on the Vlochos hill followed the fate of many other cities of west Thessaly that were destroyed in the early 2nd c. BC during the 2nd Macedonian war between Philip V king of Macedonia and the Roman Empire with the army of Titus Quinctius Flamininus.

The use of the site in its third phase during late Roman times includes the construction of a new fortification wall on its flat area which limited and essentially divided the city changing its appearance entirely.

Finally, during the fourth phase, possibly in the early Byzantine period, repairs were made on part of the east wall and a new fortification wall was perhaps built at the foot of the hill. Thus, habitation was restricted to the hill’s southern slope. Perhaps this fresh reconfiguration is associated with the general fortification and construction programme of Justinian I which was carried out in many cities. However, as archaeologist Mrs. Tsiouka noted, a surface survey was conducted as part of the programme where ancient artefacts found on the ground were selectively recorded or collected. These finds supplied important information on the life of the city through the passage of centuries. There are some interesting pieces of roof tiles that chronologically belong to the city’s second phase. These tiles depict in relief a man facing the left, while a seal can be distinguished on one of them bearing the name of Thaulios Zeus, possibly indicating the god’s cult in the city.

Lastly, the bronze coins located on the surface broaden the chronology of the city’s life, as well as information on its relations with other cities. For example we have coins from the Boeotian League and very often ones from Larisa. Coins have also been located of the successors of Alexander the Great from Macedonia and one of Justinian I from the mid-6th c. AD, concluded Mrs. Tsiouka.