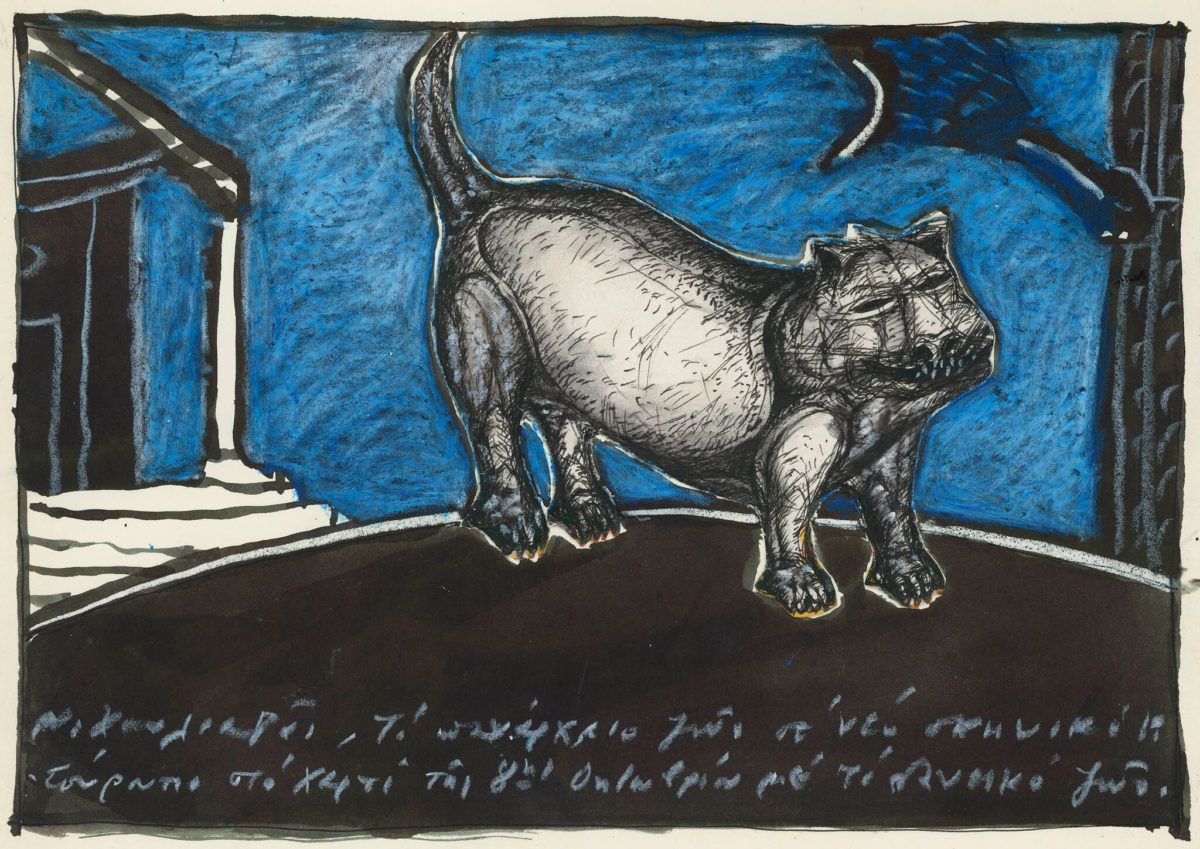 In Paper’s Night: Known and Unknown drawings by Nikos Houliaras

The current presentation was occasioned by the quite recent discovery of some unknown drawings in the late artist’s collection, which date from his student days in the Athens School of Fine Arts until his final creative moments. The importance of the drawing in Nikos Houliaras’s oeuvre is further enhanced by the inclusion also of drawings from some landmark sets in the exhibition and publication history of his course as a painter.

For Nikos Houliaras (1940-2015) the drawing offered the independence he was seeking constantly in his life and work, because it freed him from the constrictions of a specific time and place of painting. Houliaras’s drawings are never studies for larger works, they are creations in their own right. And yet they are gripped by the same idées fixes as his paintings: the memory of landscapes and the topoi of memory, words and script, the violence and tenderness of love, the solitary animal, shadow and night, the image of the Self are depicted increasingly on his paper.

Initially abstract, like his paintings, the drawings are subsequently inundated with the human presence, sometimes more linear, sometimes more elaborate in appearance. Houliaras’s drawings of the 1960s and 1970s, prevailing in the present exhibition, are also a kind of personal diary, imprinted in which, often with humour and self sarcasm, are his coterie of friends and artists, his early involvement with set designing and the song, the houses in which he lived, his view of everyday socio-political reality, female figures and his travels.

Houliaras explored numerous techniques and kinds of paper: from Indian ink, the glass marker, collage and methodical burning with a cigarette-lighter, even to tar paper, cardboard, sheets from printed calendars and the compositional form of comics.

The architectural design of the exhibition was undertaken by Stamatis Zannos. The exhibition is accompanied by a Benaki Museum publication bearing the same title, which contains texts, unpublished photographic material and images of all the works, and was designed by Erifyli Arapoglou.

Opening hours of the exhibition:

Guided tours to the exhibition will be carried out by the curator of the exhibition, Elizabeth Plessa, who will attempt to trace in Nikos Houliaras’s drawings the pathways of his art and life:

“THE PAINTED ONES WHO REMEMBER ME”

CONVERSATIONS WITH FRIENDS OF NIKOS HOULIARAS

Although Nikos Houliaras followed a completely autonomous artistic course, he was nevertheless always surrounded by many and diverse circles of friends, artists or not, who are actually depicted in drawings presented in the current exhibition, especially during the 1960s and 1970s. In the context of two encounters, four groups of Nikos Houliaras’s friends will attempt throwing light on unknown aspects of the undivided whole formed by his art and life. Coordinator: Elizabeth Plessa (curator of the exhibition).

A FEW WORDS ABOUT NIKOS HOULIARAS

Eldest son of Evangelos Houliaras and Sophia (née Despoti), he was born in Ioannina, on 15 October 1940. His father owned a drapery store. Nikos had a younger sister, Ioulia Houliara, and a brother, the sculptor Yorgos Houliaras.

After graduating from the Commercial School of Ioannina, where he also took lessons in calligraphy, he went to Athens in 1959. There he attended a preparatory college for the Athens School of Fine Arts. He studied sculpture (under Yannis Pappas) and set design (under Vassilis Vassileiadis), graduating from the ASFA in 1967. In 1966 he designed his first sets for the National Theatre and by 1970 he was writing one-act plays. The theatre led him into painting. In 1969 he was awarded the Parthenis First Prize and held his first solo exhibition, in the Astor Gallery, Athens. In 1970 he participated in the Biennale of Alexandria.

From 1962 onwards, he wrote and published poems, prose works, plays, and texts on painting, most of them published by Nefeli Editions. His writings have been translated into many languages. He personally designed all his books on his painting and literature. Two of these publications were awarded the prize for “Best Book Design from All Over the World” at the Leipzig Book Fair.

From 1965 to 1971, Nikos Houliaras was involved also with music, as composer, lyricist and performer of his own songs, as well as an arranger of traditional Epirot folk tunes. He sang in various boîtes in Plaka (Tavania, Apanemia, Chryso Kleidi), as well as in Nefeles with Notis Mavroudis. However, in 1972, he decided to devote himself to painting.

In the years 1969-1971, he travelled extensively in Europe, visiting museums and monuments.

In 1976 he acquired the house on Antiparos, privileged island of his life and his painting.

He held many solo shows, mostly in the Athenian gallery Nees Morfes (1976-2006), and participated in group exhibitions in Greece and abroad. A retrospective exhibition of his work was held in 2011 at the Benaki Museum (Peiraios Street Building).