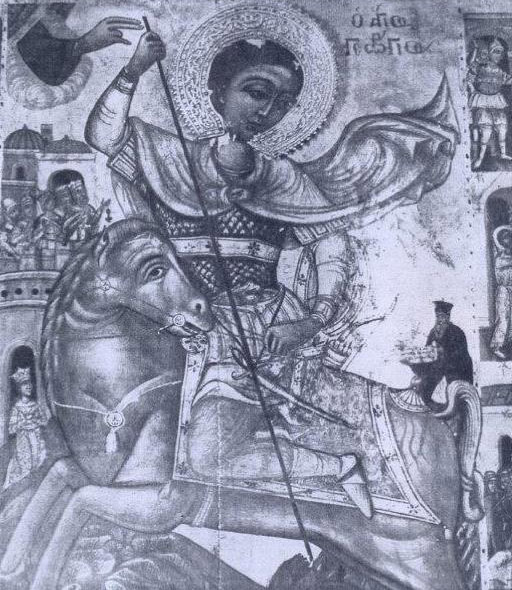 Repatriation of 19th century icon of Saint George to Cyprus

Stolen from a church in Kerynia

A 19th century icon of St George, stolen from the church of St George of Karavas in occupied Kerynia, was found in the possession of a collector in Switzerland and repatriated to Cyprus.

The icon depicts Saint George, the dragon slayer, surrounded by 16 rectangular scenes, 10 of which show his martyrdom and 6 of them his miracles.

The icon was a gift from the abbot Meletios of the Acheiropoietos Monastery. The donor is shown kneeling behind the saint. The icon (measuring 107x73cm) was painted in 1829 by Chrysanthos Syngelos, icon painter of the Aghios Herakleidios Monastery at Politiko, south of Nicosia.

Legal procedures for the icon’s confiscation began after a complaint made by the Church of Cyprus, while decisive in its return was the collaboration between the following institutions: the Church, the Ministry for Justice, the Police, the Embassy of the Republic of Cyprus in Rome which also provides consular services in Switzerland, as well as the Swiss authorities.

In August 2017, Bishop of Naples, Porphyrios, representative of the Church of Cyprus in the EU, sent a letter to the head of the Cypriot police, informing him that the stolen icon was to be auctioned on September 22 at Gallerie Koller in Zurich. A request was fast tracked through Interpol to withdraw the icon from the auction.

At the same time, the Cypriot authorities invoked the 2013 Cyprus-Switzerland agreement on the import and repatriation of cultural goods, as well as relevant international treaties.

Given the urgency of the case to prevent the auction, the Cyprus Ambassador to Rome, Tasos Tzionis, also accredited to Switzerland, was in close contact with the Swiss Ministry of Culture.

The Swiss authorities asked the Cypriot side for information.

To this end, a detailed report was prepared, proving the icon’s Cypriot origin and its protection under the Law regarding Antiquities.

The Swiss Prosecutor’s office undertook to investigate whether it was a product of theft and to identify the icon’s origin beyond any doubt. When informed it had been stolen, the owner of the confiscated icon voluntarily agreed to hand it over to the Cypriot authorities.

The book Karavas (1969), by Andreas Stylianos and Kalliopi Charmanda, which contains a relevant photograph, played an important part in documenting the icon’s origin so as to make its repatriation possible.