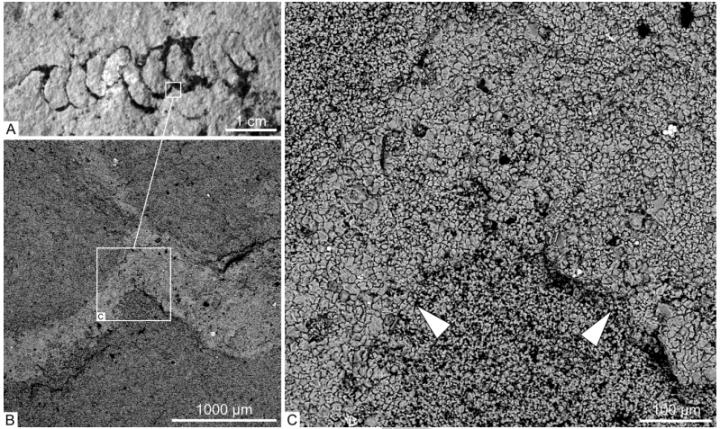 The oldest skeleton remains known to fossil chronicle of the Earth belonged to the microorganisms that lived 700-650 million years ago. International research team proved that a larger organisms of the same period, such as Palaeopascichnus linearis up to 20 centimeters long, also had a skeleton. The research is published in Precambrian Research.

Palaeopascichnus resembles a series of spheres or ellipsoids, which are placed one by one and called chambers. They have been known for a long time and can be found all across the world since for that time period they were one of the most widespread living organisms. Palaeopascichnus was considered as fossil traces of life activity for a while: someone described them as traces on the surface of a substrate or sediment left by animal migration in search of food, someone–as petrified chains of feces, someone–as the algae remains.

Researchers from Institute of Petroleum Geology and Geophysics SB RAS and Novosibirsk State University together with their colleagues from Great Britain and France for the first time managed to prove that in fact Palaeopascichnus was a skeletal organism. The scientists found out that Palaeopascichnus has much in common with modern giant protozoa: deep-sea single-cell xenophyphores. For example, Palaeopascichnus agglutinated exoskeleton by staying motionless at the bottom and gluing around itself particles of rocks and sediment from the surrounding space. As a modern example of the agglutination caddisflies can be named, even though they are moving.

“The material was collected in the Arctic at the Olenek uplift of the northeast of the Siberian platform, where a very large accumulation of organisms was found,” says one of the researchers Anton Kolesnikov, member of Institute of Petroleum Geology and Geophysics SB RAS and Doctor of the University of Lille. “When we made a thin cut through the Palaeopascichnus across the chamber, we saw that there is a certain wall composed of a material that is more coarse in comparison to the host rocks.”

A set of diverse methods was used in this research: the scientists made thin saw cuts, or slides, studied them under microscope, conducted tomography studies, used scanning electron microscope and so for. Afterwards the researchers started to look at additional materials from the White Sea, Ukraine, Australia, Canada, and all these samples confirmed the existence of a skeleton.

Through statistical calculations of rock grains size in the Palaeopascichnus wall and the surrounding space, the scientists also found that these organisms preferred to collect large particles to construct the skeleton rather than everything around them.

Palaeopascichnus turned out to be more lucky than other creatures of that time, such as Ediacaran biota, which almost disappeared approximately ten million years before the Cambrian. Palaeopascichnus lived up to the beginning of the Cambrian, and theoretically modern xenophyphores might be their distant descendants.

Apart from Palaeopascichnus‘ potential descendants, the paleontologists discovered their ancient relatives. “The thing is that there are plenty organisms like Palaeopascichnus,” Anton Kolesnikov notes. “For instance, genus Orbesiana, which was discovered in the well drilled near Moscow by a famous scientist, founder of the Ediacaran biota study, Boris Sokolov. He described the fossils that he found as the ancient macroscopic algae, and after that this material got lost for a while. Recently, the family of Boris Sokolov offered us his archives and we found the original material with detailed explanatory note.”

The researchers managed to use the most advanced equipment, and with the help of British and French colleagues they showed that Orbesiana was far from being an algae. More likely, they were close to Palaeopascichnus and might be placed in one group of the oldest macro-skeletal organisms. “Palaeopascichnus preferred to build their skeleton of single row chambers, while Orbesiana used multiple raw building as they either created spirals and foam-like clusters of irregular shape or simply were two- and multi-row,” explains Anton Kolesnilov.

For the next step of the research the paleontologists plan to further examine organisms, that could be attributed to this group. In other words, the researchers have to deeply understand the taxonomy of these first macro-skeletal creatures of the Ediacaran biota.