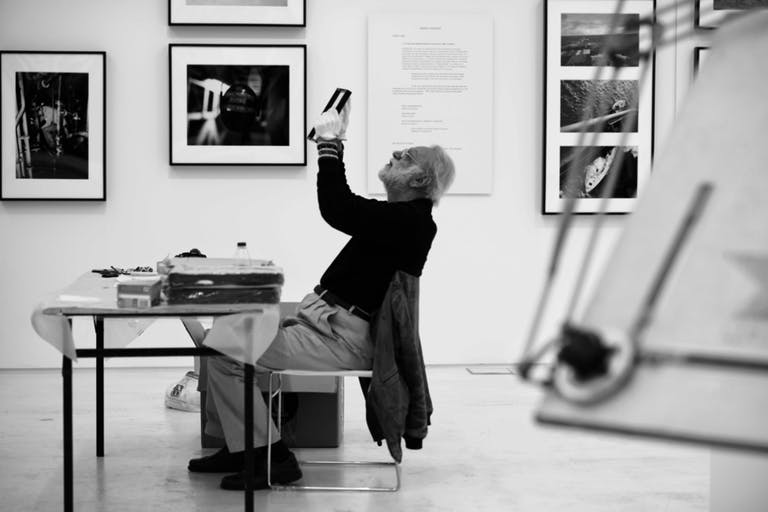 An art exhibition by Dimitris Alithinos titled Hysteron, Proteron, Us is opening at the end of the month at the Archaeological Museum of the Lemesos District. The exhibition is organized within the framework of the European Year of Cultural Heritage 2018, using the slogan “Our heritage: where the past meets the future”.

Dimitris Alithinos is considered one of the most significant contemporary Greek painters, with a pronounced and systematic global presence. Born in Athens, in 1945, he studied painting at the Athens Supreme School of Fine Arts and at Rome’s Accademia di Belle Arti, as well as architecture at the École Spéciale d’Architecture in Paris. He has held several solo exhibitions, participated in group exhibitions and repeatedly represented Greece to international events and major Biennales.

From 1981 to the present date, in parallel to his visual art work, he develops Concealments of works and symbolic objects in various locations across the planet. The Concealments series are in effect rituals during which the works are hidden inside the earth in an effort to preserve memory and the passage of human beings through this planet. Alithinos has made 210 Concealments to date, within an ongoing life work that occupies an emblematic place in his artistic yield. Since 1993 he has participated in cultural and religious events and ceremonies across the globe, aimed to rescue local cultural particularities threatened with extinction due to the homogenizing tendencies of globalized economy. In 2013 a large retrospective by Alithinos was hosted at the National Museum of Contemporary Art in Athens. In 2015 he was honoured for his body of work from AICA Hellas, the Greek Association of Art Critics.

Aside visual art, Dimitris Alithinos has also produced literary work; in fact, another one of his achievements is the relevance between the two, stemming from his interest in the political and social reality. Alithinos nurtures an ecumenical perception of art, which he believes may function as a medium of alternative political thinking and social considerations, enabling in this way a conjunction between art and life.

Exploration of time features prominently in the work of Dimitris Alithinos. In this exhibition he creates within an archaeological museum where time does not exist – or where there is a multitude of times, conventionally determined. On display at the museum are archaeological objects, alienated from their original use, now exhibited as concepts and ideas. It is there where Alithinos endeavours to intervene and engage with such concepts by way of his own works that include products and waste of contemporary civilization. In this manner, the artist raises questions about the role and the potential of art in periods of transition. At the same time, he urges spectators to set out on this journey into memory, to speculate and define themselves based on the guidelines proposed by the artist himself. The title of the exhibition alludes to a rhetorical device (Hysteron Proteron) where what is put first is in fact temporally or logically subsequent.

The exhibition will be inaugurated by the Minister of Transport, Communications and Works, Mrs. Vassiliki Anastassiadou and H.E. the Ambassador of the Hellenic Republic to Cyprus, Mr Ilias Fotopoulos. A reception will follow.

On opening day, the public is invited to use the parking area of the Limassol District Court, adjacent to the Archaeological Museum.