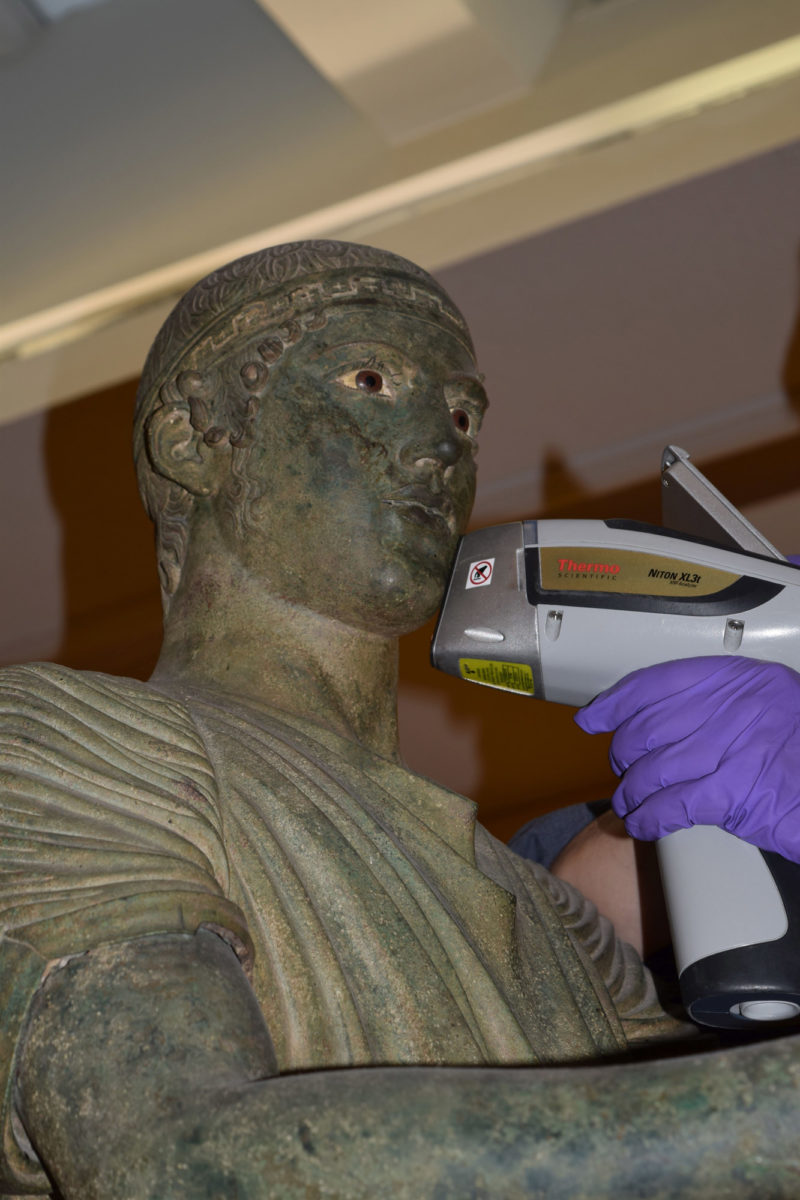 Was the Delphi Charioteer multicoloured? The operation of tracing colours on ancient marble sculptures‒even on the whole of the Acropolis monument‒has begun decades ago with a series of research methods and analyses and the first results have been occasionally presented. (The first time was at the Munich Glyptothek in 2004, followed by other European countries including Greece, at the National Archaeological Museum where 21 painted casts of statues were displayed with 51 original ancient works that preserved remnants of colour, mainly traces of the coloured decoration).

Since 2017 French researchers are looking for the original colours of the famous bronze statue of the Delphi Charioteer with new methods of analyzing its material of construction. It was French archaeologists, moreover (members of the French delegation) who during the 1896 excavation in Delphi brought the Charioteer to light almost intact, with the green patina that had protected it from erosion.

“The latest research on the bronzes of antiquity: new data on the Delphi Charioteer” is the title of a lecture by Sophie Descamps, curator of the Greek and Roman bronzes of the Department of Greek, Etruscan, and Roman Antiquities at the Louvre Museum. The lecture was scheduled to be given in Thessaloniki (Amphitheatre of the Teloglion Foundation of Art, AUTH) on November 23 but has been cancelled.

Sophie Descamps’ lecture would present the very hopeful first results of research carried out in May 2017. These made it possible to determine the analytical methods that must be applied in 2019 so as to restore the original colours of the famous sculpture. The results also show that the Charioteer was a prototype for many technical novelties invented in Greece during the period of the Severe Style (early 5th century BC).

Large Greek and Roman bronze statues are extremely rare. In her lecture Mrs. Descamps will emphasize that the Delphi Charioteer, recognized as one of the masterpieces of ancient sculpture, has occupied a privileged position since its discovery in 1896. For over a century the statue’s technology has only been superficially examined; despite its belonging to a composition of sculptures that became the object of many studies, whether related to style or inscriptions, and despite our knowing both its date for some time, its original place in the sanctuary of Apollo and the identity of the person who donated it (the tyrant Polyzalus of Gela in Sicily). For this reason the Ephorate of Antiquities of Fokis signed an agreement with the French School at Athens and the Louvre Museum so as to resume and complete the study of the most famous votive offering in Delphi, in collaboration with the Centre of Research and Restoration of the Museums of France.

The archaeologist Sophie Descamps is well known in Thessaloniki since the summer of 2011 when she came to the city as head of a team of French and Greek archaeologist who collected 670 exhibits from the Archaeological Museum of Thessaloniki and from all the Ephorates of Prehistoric and Classical Antiquities of Macedonia and put together the exhibition entitled “Ancient Macedonia: In the kingdom of Alexander the Great”. The exhibition ran from October 2011 to January 2012 at the Louvre Museum and Sophie Descamps again put a spotlight on the city with the case of the return of the copies of the “Enchanted Ones” – the sculptures of Thessaloniki seized by the Frenchman Emmanuel Miller in 1864 and kept since then in the Louvre Museum.

The statue of the Charioteer is the remaining part of a bronze composition which is on display at the Archaeological Museum of Delphi and is possibly its most famous exhibit and one of the most important ancient Greek sculptures of the Early Classical period. The date of its creation can be placed directly after the Persian wars.

The specific work was part of a large votive offering and is 1.80m high. The charioteer is depicted as a very young man from a noble family of his time. He wears the typical charioteers’ long chiton with a wide belt holding it high above the waist, while two bands go over the shoulders, under the arms and criss-cross at the back. His eyes are of inlaid glass coloured brown with black pupils‒a symbol of ethos and balance. Inside the half open, full lips, four silver teeth can just be seen.

During the great earthquake of 373 BC, the fall of rocks and earth into the square surrounding the archaic temple, brought about the latter’s destruction and buried the works of art found there including the Charioteer statue. Concealed and protected under the soil that covered it for centuries it managed to avoid plundering from occasional raids, the systematic removal of sculptures by Roman emperors and the annihilation of almost all the sanctuary’s bronze works in later years. The French excavation at Delphi in 1896, brought the Charioteer to light again, almost intact, with the green patina that had protected it from erosion. Along with the bronze parts of the votive offering, a section of its stone pedestal was found, on which two lines survive from its dedicatory inscription in verse.