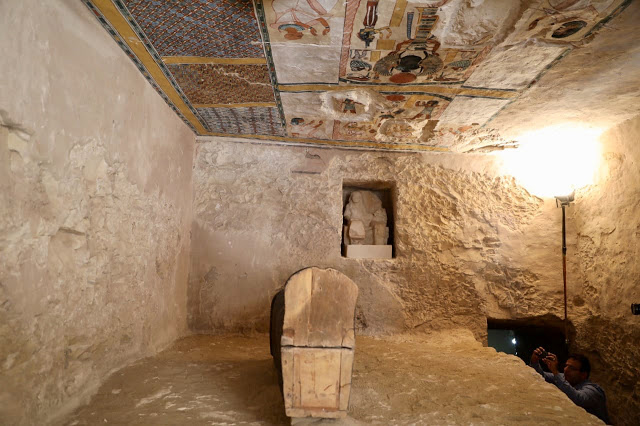 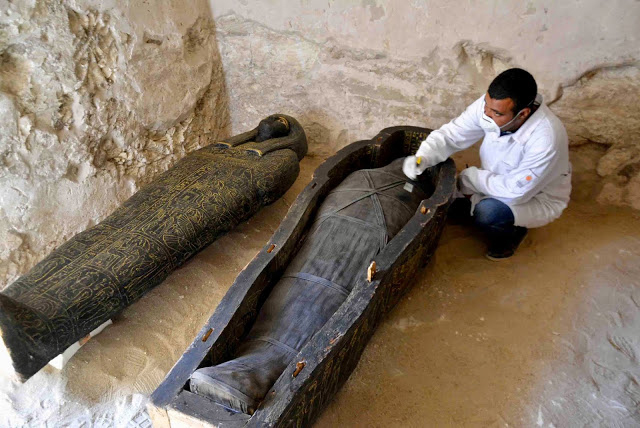 An Ancient Egyptian tomb full of coffins was discovered in Assasif, Egypt.

The Egyptian Minister of Antiquities Dr. Khaled El-Enany announced that the Egyptian archaeological mission working at Assasif, on the West Bank of the Nile opposite the city of Luxor, uncovered a tomb that belongs to a man called Thaw-Irkhet-If.  The Mission also excavated the original entrance of a previously unexplored tomb, TT28.

Dr. El-Enany said that the discovery took place following 5 months of excavation carried out by the mission led by Dr. Mostafa Waziri, General Secretary of the Supreme Council of Antiquities.

Dr. Waziri explains that after removing about 300m of rubble, the mission revealed the tomb of Thaw-Irkhet-If (meaning “North Wind in his back”) who was a “Scribe of the mummification chapel in the temple of Mut”.

The walls of the tomb are decorated with colored scenes depicting the owner with members of his family. The Scribe’s wife is shown designated as the singer of Amun Re.

Two sarcophagi from the Late period have been found in the tomb. They belong to the anthropoid type, and are carved in black wood with beautiful inlaid eyes and gilded details.

One of the sarcophagi belongs to a man called Padiest; the other one belongs to a woman called Nes-mut-ankh, who was the singer of the God Amun and most probably Padiest’s daughter.

Other finds from the tomb include two wooden statues (one of them probably of the tomb owner), a collection of 1,000 ushabtis carved in wood, faience, and clay, and 5 masks painted with vibrant colors.

Dr. Waziri mentioned that the mission also located the entrance to the tomb TT28; the tomb belonged to a man named Huri.