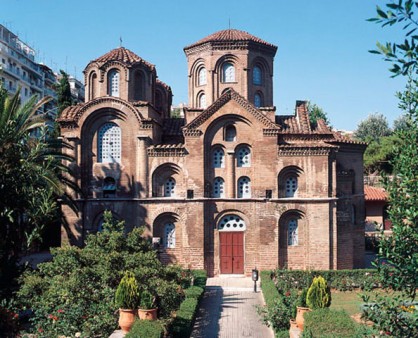 Charter for the Protection of Byzantine Heritage Monuments

The European Centre for Byzantine and Post-Byzantine Monuments organizes from Friday 30 November to Sunday 2 December the 4th International Conference on “Byzantine Monuments and World Heritage”, with the participation of 23 states of Europe and the Mediterranean under the auspices of the Greek National Committee for UNESCO. The Conference is marked as a flagship activity of the European Year of Cultural Heritage 2018, and will be the official event for the end of EYCH 2018 for Greece.

Following the three similar conferences that EKBMM had organized in 2001, 2003 and 2006 with the participation of representatives of ministries and agencies responsible for the protection and management of the cultural heritage of 19 states, whose territories include Byzantine monuments, the 4th International Conference aims to consult and vote a “Charter for the Protection of the Monuments of Byzantine Heritage”.

The draft of the Charter was entrusted to EKBMM during the previous International Conferences of the participating countries. The text of the Charter was drawn up by a Scientific Committee composed of prominent experts with academic knowledge and practical experience in the restoration and protection of Byzantine monuments. The draft was then reviewed by a Committee of International Experts comprised of Professors of Princeton, Istanbul, Rome and Athens Universities.

Following the conclusion of the consultation to be held between the representatives of the countries and its vote, the Charter will be submitted to UNESCO for endorsement and will remain open for accession by other countries in whose territories there are Byzantine monuments.

The commencement of the Conference will be welcomed by the Director of the World Cultural Heritage Center of UNESCO Isabelle Anatole-Gabriel, the Deputy Minister of Foreign Affairs Markos Bolaris, the General Secretary of the Hellenic Ministry of Culture and Sports Maria Andreadaki-Vlazaki, the Vice-Rector for Academic and Student Affairs Ariadni Stogiannidou, the Professor of Aristotle University of Thrace, 1rst Vice-Chairman of the Board of Hellenic ICOMOS Nicolaos Lianos, and the Professor of Roma Tre University, Member of the Europa Nostra Board, Paolo Vitti, while the Deputy Director of Archaeological Excavations of the Syrian Ministry of Culture Hammam Saad will present the current situation of Byzantine monuments in Syria. The Minister of Culture and Sports Myrsini Zorba, the Mayor of Thessaloniki Yannis Boutaris and the President of the Hellenic National Committee for UNESCO Ekaterini Tzitzikosta, will welcome the Charter endorsement and the completion of the Conference.

The public wishing to attend the consultation procedure from a scientific or general interest is welcome. It should be noted that the possibility to intervene in the consultation is only available to the official delegations of each State.

The Conference will take place at the “Stefanos Dragoumis” Amphitheater of the Museum of Byzantine Civilization (2, Stratou Avenue, Administration Building). It is implemented with the support and funding of the Ministry of Culture and Sports. The Museum of Byzantine Culture and the Ephorate of Antiquities of the City of Thessaloniki join the event as partners. Aegean Airlines is the air carrier sponsor.