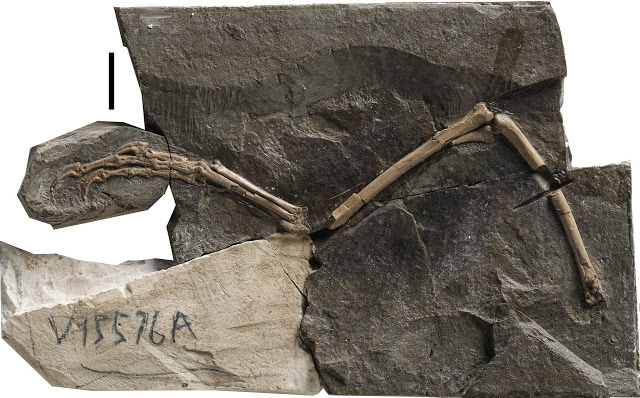 A team of scientists led by Jingmai O’Connor from the Institute of Vertebrate Paleontology and Paleoanthropology (IVPP), Chinese Academy of Sciences, reported the first occurrence of medullary bone in Enantiornithes, the dominant clade of birds during the Cretaceous.

Medullary bone is a bone tissue unique to birds today. It is present only in females about to lay eggs and forms in the empty spaces within the skeleton. This bone tissue serves as a reservoir for calcium needed to form the eggshell. Medullary bone has been reported in a variety of non-avian dinosaurs including Tyrannosaurus rex, ornithopod dinosaurs like Tenontosaurus, and several sauropods (huge long-necked dinosaurs) including Mussasaurus. It has also been identified in pterosaurs, which are flying reptiles closely related to dinosaurs.

Some reported instances of medullary bone are probably actually bone pathologies causing abnormal growth. However, in this report, IVPP scientists, working together with Mark Norell from the American Museum of Natural History and Greg Erickson from Florida State University, argued that no previous description of medullary bone in a Mesozoic reptile was well supported.

The new report is the best support for medullary bone in the Mesozoic so far since it was found throughout the entire preserved skeleton, suggesting it was part of a system-wide process rather than a local pathology. However, the authors concede that scientists still know too little about medullary bone to confirm, without additional evidence (e.g., association with a nest or eggs), that the fossilized individual with this tissue was reproductively active.

In light of the currently available evidence, medullary bone might have been an entirely avian feature even in the Mesozoic. It evolved as a result of the thinned, hollow bones in birds, which lightened the skeleton for flight, as well as their increased egg size.

The findings were published in Nature Communications.