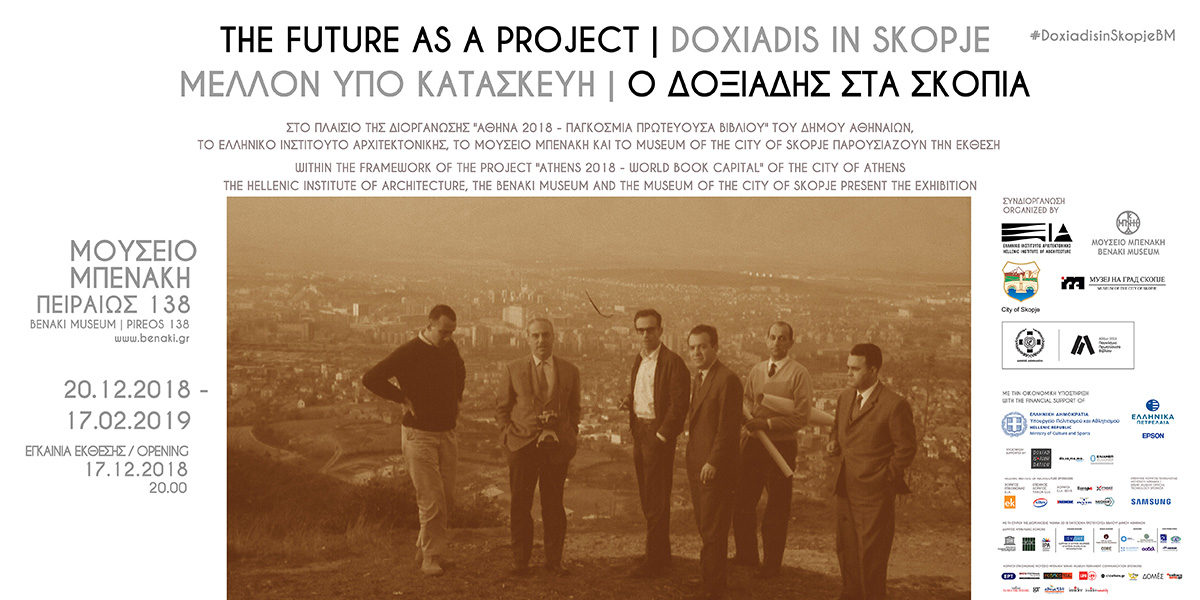 The Future as a Project, Doxiadis in Skopje

Fifty-five years after the 1963 earthquake that demolished 80% of the city of Skopje, the contribution of Constantinos A. Doxiadis in the redesign of the city is still largely unknown. Meanwhile, the history of the modernist buildings that dotted  the  new  cityscape,  after  Kenzo  Tange’s  office  took on  the  task  of  redesigning  the  city  centre,  remains unappreciated. Many excellent examples of metabolism and brutalism have been suffering from decades of neglect.

The Future as a Project | Doxiadis in Skopje, opening on Monday 17 December at 20.00 at Benaki Museum / Pireos 138,  presents  for the first time  Doxiadis’s  work  in Skopje,  which  includes  a detailed  survey  of the affected  areas, strategic plans for the city and a new outline for the master plan. In addition, it introduces  to the Greek public the work  of Kenzo Tange  for Skopje’s  city centre,  and showcases  a series  of modernist buildings  authored  by leading Yugoslavian architects that still stand in the city today.

The exhibition and its accompanying events are organised by the Hellenic Institute of Architecture, the Museum of the city of Skopje and the Benaki Museum, co-organized and supported by ‘Athens 2018 – World Book Capital’ by the City of Athens (of which major donor is Stavros Niarchos Foundation), with the financial support of the Ministry of Culture and Sports. The exhibition  material has been contributed  mainly by the C. A. Doxiadis Archives of the Constantinos and Emma Doxiadis Foundation  and the personal collection of Jovan Ivanovski, Ana Ivanovska Deskova and Vladimir Deskov.

Within  the framework  of the exhibition  a 1-day  international conference will take  place  at the Benaki  Museum  / Pireos 138 on the opening day (15.00-19.30, free entrance). On Tuesday 18 December, a roundtable will take place at 18.00 (RSVP required), in Greek, and will include a presentation of the catalogue.

Two  free  guided  tours  of  the exhibition will also be carried out by the curatorial team right before the discussion (17.00-18.00, RSVP required).