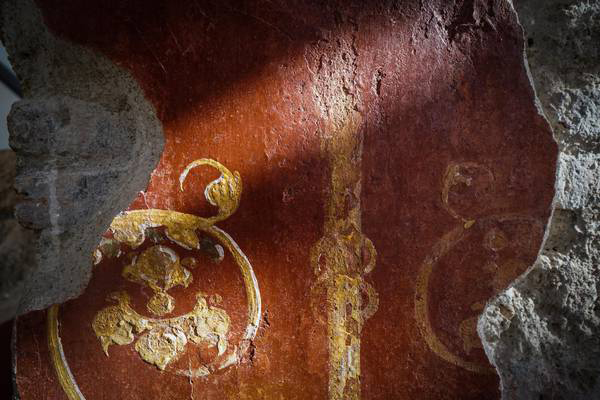 The Rebirth of the Schola Armaturarum

On the 3rd January the Schola Armaturarum re-opened to the public. The story of this place, which is symbolic of the rebirth of Pompeii, and whose upper part collapsed on 6th November 2010, will be told by the restorers, who will recount the meticulous restoration intervention on the frescoes and show the rooms at the back of the structure which were the focus of the last excavation campaign, and which contributed to our understanding of the function of this building.

Visits are possible every Thursday during the opening hours of the site, for regulated groups of visitors.

This is the first step towards a more complex project for the development and musealisation of the structure, including the back rooms, which will allow one to see the paintings and artefacts in the place of their discovery.

Excavated by Vittorio Spinazzola between 1915 and 1916, the Schola Armaturarum was probably the headquarters of a military association, as we can deduce both from the decorations and from the discovery of weapons which were kept inside it. The most recent excavations, carried out for the stabilisation of the structure, seem to reinforce this hypothesis. At the rear of the building, rooms have been unearthed where amphorae were kept. These vessels stored oil, fine wines and fish sauces from all over the Mediterranean (Crete, Africa, Sicily and Spain) – in other words high quality products which were served on convivial or official occasions.

The collapse of 2010 was not the only one to affect the building. During the Allied bombing of 1943, the structure was partially destroyed, and most of the upper part of the structure and the decorative elements were irreparably lost. During the subsequent restoration which was carried out by Amedeo Maiuri between 1944 and 1946, the side walls were reconstructed to a height of 9m, and a flat reinforced concrete roof was built. As was the case in many restorations at the time, the reconstruction intervention – which sought to revive the original dimensions of the building – was conducted with improper materials (iron and cement) compared to what was used in ancient times.

The Prosecutor’s investigation did not identify the cause of, or responsibility for, the collapse of 2010. It is, however, probable that the collapse was the result of a series of joint causes, aggravated by the rain intensity of those days, including: the likely malfunctioning of the water drainage systems and consequent excessive load on the modern roofing; the thrust of the ground behind; the incompatibility of the materials which were used in the postwar reconstruction and the lack of a planned system of monitoring and maintenance. The collapse predominantly affected the modern reconstruction of Maiuri and, to a lesser extent, the original paintings.

The restoration interventions began in 2016 with the technical support of Ales, the internal body of MiBAC which has been involved in the planned maintenance of Pompeii for more than three years. Once a temporary covering was created to allow works to begin, the initial operation involved stabilising the structures and decorative elements in order to avoid the further loss of original material. It was therefore necessary to first restore stability to the masonry and surviving plaster, which were heavily compromised by stresses caused by the collapse of the roof and side walls.

Following this, the painted surfaces were intervened on, along with the preserved walls within the building, and the fragments recovered after the collapse were recomposed in the laboratory. It was decided to restore the figurative legibility of the paintings, via both careful cleaning and attentive aesthetic presentation, while guaranteeing the recognisability of the intervention. The treatment to be employed for the holes which were present on the painted walls was subject to a particularly extensive critical reflection. It was decided to adopt the ‘trattegio’ technique, a method developed by the Central Institute of Restoration in the 1940s which consists of the combination of faint hatched lines which reproduce the original polychrome, and allows restoration of the unity of the lost image, while ensuring that the restoration intervention can be distinguished when viewed close up.

“From the metaphor of the Italian inability to take care of a precious place which belongs to all humanity, the reopening of the Schola Armaturarum represents a symbol of redemption for the results reached at Pompeii with the Great Pompeii Project and, more generally, a sign of hope for the future of our cultural heritage” declares Director General Massimo Osanna, “Since that collapse in November 2010, whose media resonance led to a chorus of international indignation, a new awareness of the fragility of Pompeii was established, along with the necessity of beginning a process of conservation, consisting not only of extraordinary and episodic interventions, but above all of care and daily attention.”