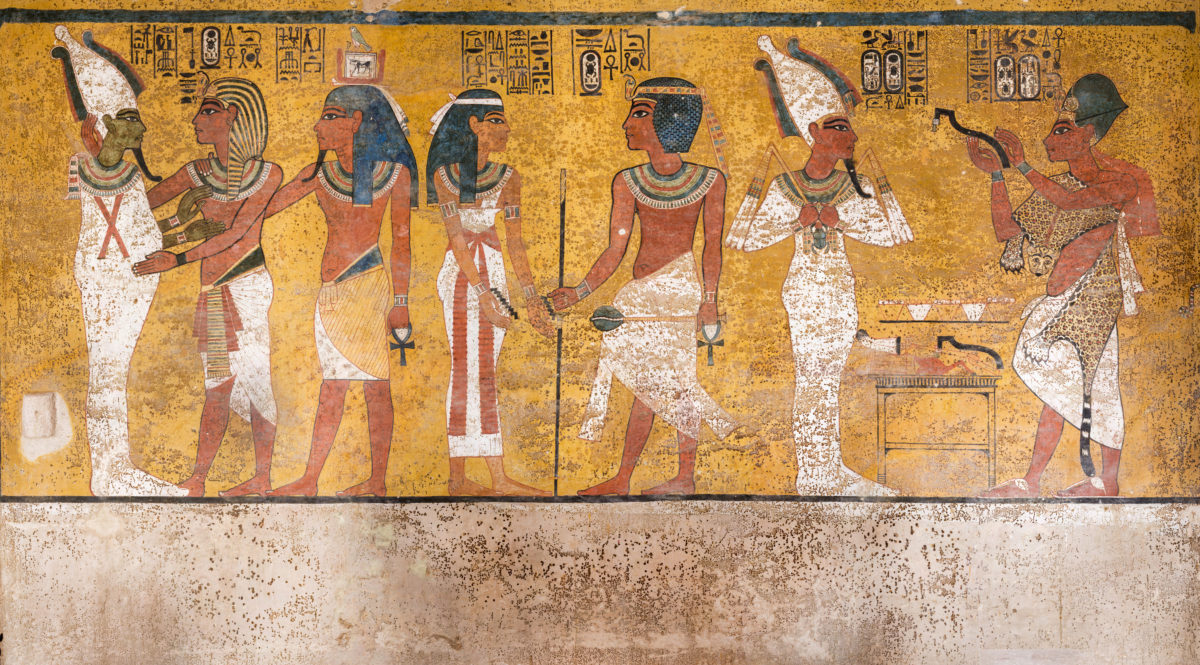 The Getty Conservation Institute (GCI) announced on Tuesday, January 22, the completion of almost a decade of research, conservation efforts, and infrastructure improvements at the Tomb of Tutankhamen in Egypt, one of the best known cultural heritage sites in the world. The project—a multi-year collaboration between the GCI and Egypt’s Ministry of Antiquities—focused on conservation and the creation of a sustainable plan for continued management of the tomb.

“This project has greatly expanded our understanding of one of antiquity’s most storied places,” says Tim Whalen, John E. and Louise Bryson Director of the Getty Conservation Institute. “It’s also representative of the collaborative partnership that the GCI undertakes with colleagues to create a model of practice that can be shared with professionals, and at other sites, around the world. We are grateful to our Egyptian colleagues for this remarkable opportunity.”

On January 31, 2019 a symposium will take place in which the collaborative Tutankhamen project will be presented together with colleagues from the Egyptian Ministry of Antiquities.

“Conservation and preservation is important for the future and for this heritage and this great civilization to live forever,” says Zahi Hawass, Egyptologist and former minister of State for Antiquities in Egypt, who also initiated the project with the GCI.

When the tomb was discovered in 1922 by archaeologist Howard Carter, under the patronage of Lord Carnarvon, the media frenzy that followed was unprecedented, and in many ways continues to this day. Carter and his team took 10 years to clear the tomb of its treasure because of the multitude of objects found within it. While the objects Carter’s team catalogued and stabilized were housed and secured, the tomb itself became a “must-see” attraction, open to the public and heavily visited by tourists from around the world. The tomb still houses a handful of original objects, including the mummy of Tutankhamen himself (on display in an oxygen-free case), the quartzite sarcophagus with its granite lid on the floor beside it, the gilded wooden outermost coffin, and the wall paintings of the burial chamber that depict Tut’s life and death.

The great demand for entry to the small tomb gave rise to concerns among Egyptian authorities about the condition of its wall paintings. Humidity and carbon dioxide generated by visitors promotes microbiological growth and can physically stress the wall paintings when the amount of water vapor in the air fluctuates. It was thought that brown spots—microbiological growths on the burial chamber’s painted walls—might be growing.

Another problem in the tomb was physical damage to the wall paintings. This included scratches and abrasion in areas close to where visitors have access, and inadvertent damage likely caused by film crews with equipment operating in the chamber’s tight spaces. Dust carried by the shoes and clothing of the tomb’s many visitors had also settled throughout, creating a gray veil on the uneven surfaces of the walls. This obscured the brightness of the paintings and increased the need for cleaning and the subsequent risk of additional paint loss.

In addition, high levels of humidity, excessive carbon dioxide, crowding, poor lighting and ventilation, lack of signage, and other factors combined to create a poor experience for visitors to the tomb.

Prompted by these concerns, the GCI and Egyptian authorities developed a multi-year collaboration focused on the conservation and management of the tomb and its wall paintings. The GCI already had considerable experience working in Egypt at the Tomb of Queen Nefertari in the Valley of the Queens and on a plan for the overall conservation and management of the Valley of the Queens.

The GCI-Egyptian project went on to carry out the most thorough study of the tomb’s condition since Carter’s time. The team of experts included an Egyptologist to conduct background research; environmental engineers to investigate the tomb’s microclimatic conditions; microbiologists to study the brown spots; documentation specialists, architects, and designers to upgrade the tomb’s infrastructure; scientists to study the original materials of the wall paintings; and conservators to carry out condition recording and treatment.

“As in all of our collaborative projects, the GCI has taken the long view, with the intent to provide sustainable conservation and site management outcomes,” says Neville Agnew, senior principal project specialist at the Getty Conservation Institute. “This involves systematic planning, documentation, scientific investigation, personnel training and a sensitive approach to treatment.”

The project team found the wall paintings to be in relatively stable condition, apart from localized flaking and loss of paint that was caused by both inconsistencies in the materials used and their application, as well as damage caused by visitors. Newly designed barriers now restrict visitor access in these areas to reduce the risk of future damage. The paintings were stabilized through dust removal and reduction of coatings from previous treatments, and condition monitoring was also established to better evaluate future changes.

Also addressed were the mysterious brown spots on the wall paintings. They were already present when Carter first entered the tomb, and a comparison of the spots with historic photographs from the mid-1920s showed no new growth. To confirm this finding, DNA and chemical analysis were undertaken and confirmed the spots to be microbiological in origin but dead and thus no longer a threat. Because the spots have penetrated into the paint layer, they have not been removed since this would harm the wall paintings.

In addition to the wall paintings conservation, the GCI also facilitated upgrades to the protection and presentation of the site, including infrastructure (walkways, viewing platform, signage, lighting, and an air filtration and ventilation system to mitigate humidity, carbon dioxide, and dust), a bilingual maintenance manual for the installations in the tomb, training for local personnel, and recommendations for visitor numbers and management that include guidelines for filming inside the tomb. The tomb was open for most of the project, and visitors were able to observe and ask questions as the conservators worked. The tomb is currently open to visitors.