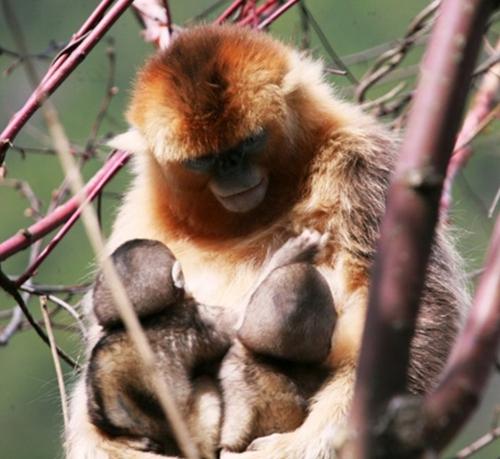 A team of scientists led by Prof. LI Ming of the Institute of Zoology, Chinese Academy of Sciences, found widespread allomaternal nursing behavior in nursing others’ offspring in an Old World monkey, the golden snub-nosed monkey.

The findings were published in an article entitled “Routine allomaternal nursing in a free-ranging Old World monkey” in Science Advances on Feb. 20.

The evolution of lactation in metatherian and eutherian mammals has resulted in a large degree of nutritional and developmental dependency between a female and her offspring.

Milk production is energetically costly for mothers since they need to synthesize and provide nutrients, hormones, vitamins, and immune compounds. Therefore, lactating females should be reluctant to invest time or energy in nursing others’ offspring.

Based on more than eight years of field observation of infants and their mothers at Shennongjia National Park, Central China, as well as analysis of the monkeys’ reproductive histories, the study provides the first evidence of regular allomaternal nursing in golden snub-nosed monkeys and expands the taxonomic distribution of this behavior in primates to Old World monkeys.

The study found that most infants of golden snub-nosed monkeys were allonursed by one or two additional adult females besides the biological mother. Allomaternal nursing was largely confined to the first three months of the infant’s life, and mainly practiced by related females who reciprocally nursed each other’s offspring. Therefore, the study supports kin selection and reciprocity hypotheses and provides an evolutionary explanation for allomaternal nursing in golden snub-nosed monkeys.

In contrast, the study provides no support for the misdirected parental care hypothesis, which had previously been used to explain allomaternal nursing in primates.

The current study shows that allomaternal nursing enhanced infant survivorship and did not have a negative impact on the future reproductive success of the allonursers. Therefore, considering that similar social and ecological traits typify all primate species that practice allomaternal nursing (including humans), the researchers have proposed that allomaternal nursing might have arisen through natural selection since heavy postnatal energy requirements and harsh or unpredictable environmental conditions placed a premium on shared provisioning.

The current study also shows that reciprocity and relatedness play a significant role in the maintenance of allomaternal nursing in these primates. The researchers observed that mothers permit other females to take their infants as early as their first day of life and let them carry and groom their infants. These female bonds may be mediated through kinship and common residence in the same social unit, as well as other forms of social behavior (e.g., grooming) that promote a set of affiliative and permissive relationships, which are key to the infant-mother-allomaternal caregiver relationship.