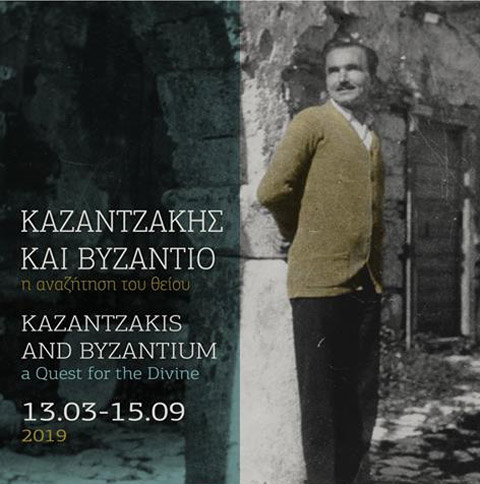 Kazantzakis and Byzantium: The quest for the divine

The Museum of Nikos Kazantzakis and the Museum of Byzantine Culture, together with the Regional Directorate of Crete present the temporary exhibition, titled “Kazantzakis and Byzantium: the quest for the divine”, in the most “Byzantine” city of Greece, Thessaloniki. The exhibition is the culmination of the cooperation between the two museums, which began in 2017, on the occasion of the 60th anniversary of the death of Nikos Kazantzakis.

Exhibits and archival documents of the Kazantzakis Museum, some of which are exhibited for the first time to the public, such as the author’s diaries from his visits with Angelos Sikelianos to Mount Athos and the Peloponnese, will be presented in the “Eftyhia Kourkoutidou-Nikolaidou” hall of the Museum of Byzantine Culture. The Archives of ERT S.A. and those of the National Theatre of Northern Greece contributed to the exhibition by providing audiovisual material.

The aim of the exhibition is to highlight the unfamiliar aspects of Nikos Kazantzakis’ multi-level and creative relationship with the cultural wealth of the Byzantine world and the way this was transformed into his work. His pilgrimage to Mount Athos, his contact with the Byzantine landscape, his inspiration from the writings of Byzantine literature and the philosophical approach of Byzantine characters (Julian the Apostate, Nikephoros Phokas, Constantine Palaiologos) through his creative engagement with the tragedy, are some of the aspects of this relationship that the Exhibition deals with.

The Exhibition, which was jointly curated by both Museums, will be held from 13 March to 15 September 2019.

The inauguration will be held on Wednesday, 13 March 2019, at 8.00 p.m. The event will be framed with musical extracts from the work “The Akathistos Hymn” by Romanos Melodos, orchestrated by Christos Leontis.