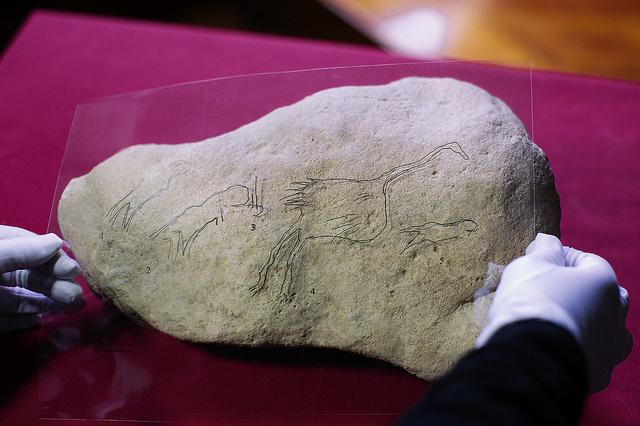 In the site of Hort de la Bequera

It is not very common to find representations of scenes instead of individual figures in Palaeolithic art, but it is even harder for these figures to be birds instead of mammals such as goats, deer or horses.

So far, historians have only found three scenes of Palaeolithic art featuring humans and birds in Europe.

Now, an article published in the journal L’Anthropologie tells how University of Barcelona researchers found—in the site of Hort de la Bequera (Margalef de Montsant, Priorat)—, an artistic piece from 12,500 years ago in which humans and birds try to interact in a pictorial scene with exceptional traits: figures seem to star a narration on hunting and motherhood. Regarding the Catalan context in particular, this is an important finding regarding the few pieces of Palaeolithic art in Catalonia and it places this territory within the stream of artistic production of the upper Palaeolithic in the Mediterranean.

The piece they found is a 30-centimeter long limestone which shows two human figures and two birds, which the researchers identified as cranes. Since they found the piece in 2011, they underwent all cleaning, restoration and 3D copying procedures to study it in detail. Those figures were engraved in the stone board with a flint tool so that they created an organized composition compared to the other pieces of the same period.

“This is one of the few found scenes so far which suggest the birth of a narrative art in Europe, and this theme is unique, since it combines an image of hunting and a motherhood one: a birth with its young one”, says the first signer of the article, ICREA researcher and lecturer at the UB Inés Domingo. “In the represented scene the birds catch the attention, they are copied or chased by two human figures”, continues Domingo. “We do not know the meaning of the scene for prehistoric peoples, but what it says is that not only they were regarded as preys but also as a symbol for European Palaeolithic societies”, she continues.

“We do not doubt this is an exceptional milestone in European Palaeolithic rock art due its singularity, its excellent conservation and the chances to study it within a general context of excavation”, say the authors of the article; members of the Prehistoric Studies and Research Seminar (SERP). Apart from Domingo, other signers are the UB lecturers of Prehistory Pilar García Argüelles, Jordi Nadal, directors of the excavation in Host de la Boquera, Professor Josep Maria Fullola, director of SERP, and José L. Lerma and the researcher Miriam Cabrelles, from Universitat Politècnica de València, who worked on the 3D reproduction of this piece.

The other sites in Europe researchers had found so far with human and bird figures are rock paintings in the site of Lascauz, a perforated baton in Abri Mege (Teyjat, Dordogne), and the Great Hunter plaque in the site of Gönnersdorf (Germany).

SERP researchers have been excavating in the valley of Montsant since 1979, an exceptional area regarding findings of this period of the late upper Palaeolithic. In particular, excavations have taken place in Host de la Boquera since 1998 and it provided a great amount of flint tools and structure such as rooms for a fireplace.

The director of the excavation, Pilar García Argüelles notes that “the findings of the engraved scene are exceptional, and proves the importance of the site and the area regarding Palaeolithic art in the peninsular north-east area; where we can find nearby the only Palaeolithic cave engraving in Catalonia, the deer in the cave of Taverna (Margalef de Montsant), and about 40 kilometres away there is Molí del Salt (Vimbodí), with an interesting series of stone blocks with engraved animals and a representation of huts”.

The first to identify the engraving was the co-director of the excavation, Jordi Nadal, who remembers that moment with excitement: “Since the first moment I was aware of the importance of this finding, of its uniqueness; these things do not happen very often, this is seeing a figure that has been forgotten and buried for 12,500 years”.