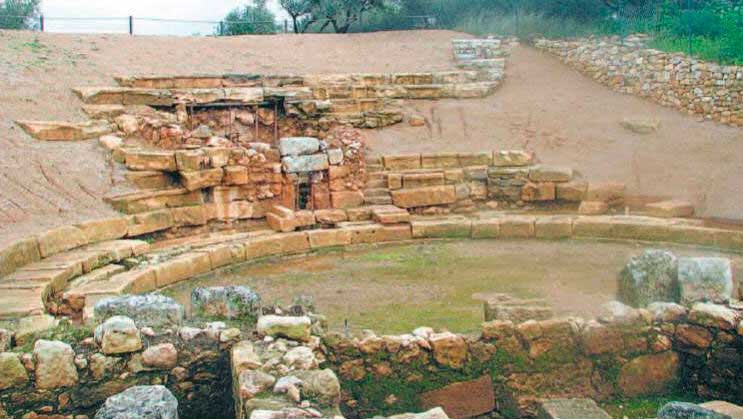 Excavations at the ancient theatre of Aptera

Second phase: completion of the monument’s restoration and enhancement works

Yesterday, the Vice Governor of Chania Region Apostolos Voulgarakis, the director of “Diazoma” Stavros Benos and the professor of Archaeology Petros Themelis were shown round the ancient theatre of Aptera by the Director of the 28th Ephorate of Byzantine Antiquities Anastasia Tzigounaki, where they could see the progress made in the excavation works.

Works of the ancient theatre of Aptera (Crete) began in July 2008 following the Central Archaeological Council’s (CAC) approval of the relevant study. In the second phase, the work was integrated in the National Strategic Reference Framework (NSRF), with a € 2,475,000 funding for the completion of the monument’s restoration and enhancement works.

Archaeologist Vana Ninkou-Kindeli, head of the research team, said the funding is enough for the completion of the enhancement works of the theatre.

The theatre of Aptera is located at the Paliokastro site of the Municipality of Souda (Chania region). It was built in two phases: the first one during the Hellenistic period, and the second in the 1st century AD. Parts of the scenic building show adaptations made after the theatre was built.

The theatre has the typical structure of Hellenistic theatres, consisting of the auditorium (koilon), the orchestra and the scenic building. It was made of the local limestone, like most monuments of the ancient city.