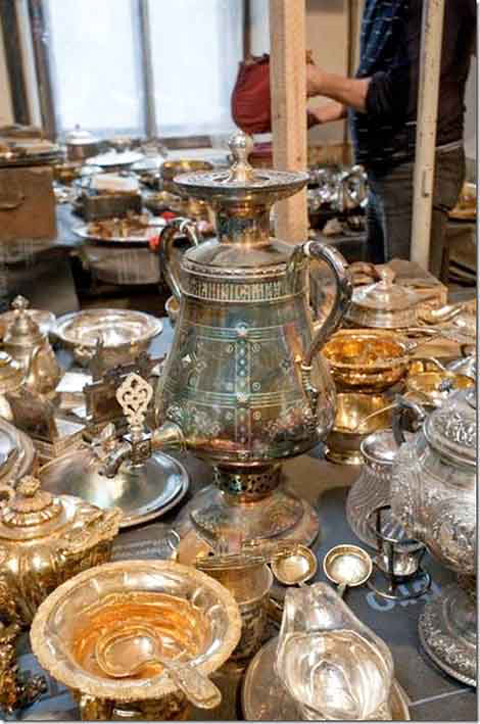 Impressive treasure trove from Tsarist period has found its place

More than 2,000 items from an impressive treasure trove, known as the ‟Naryshkin treasure”, belonging over a century ago to the Naryshkin family of aristocrats, unearthed in 2012 while restoring the Trubetskoi-Naryshkin mansion in central Saint Petersburg, will soon adorn the ‟Tsarskoye Selo” museum (the Tsars’ summer palace near St Petersburg).

The treasure of precious artefacts, found intact and in perfect condition, was shown to the journalists and at the end of this year will be on display in the museum, since most of its items are works of art. It was announced by museum head Olga Tartinova that the treasure was handed over today to the ‟Tsarskoye Selo”.

The museum’s deputy director and supervisor of the museum’s scientific documentation, Iraida Bott said that the most of the items in the collection belonged to the Tsars Nicholas I and Alexander II, adding that the ‟Naryshkin treasure” will be on show to the general public at the end of this year.

The museum’s Deputy Director for Collections and Inventory Tatiana Serpinskaya, having referred to the artefacts’ conservation process, pointed out that the treasure is made up of items weighing a total of 412 kilos in silver and belonged for several generations to the Naryshkin family. She stated that the treasure which had been transferred to the Museum Fund of the Russian Federation, is now going to the ‟Tsarskoye Selo” Museum by decision of the Ministry of Culture. The main part of the-collection, said Serpinskaya, is approximately 500 items of silver Russian style dinnerware from the firm of Sazikov, making up 25% of the treasure.

The ‟Naryshkin treasure” was discovered in March 2012 during renovation work being done on the Naryshkin mansion on Tchaikovsky Street. Workmen from the crew came upon the treasure when pulling up the floorboards of a crypt between the second and third floor. Τhe crypt was in fact situated where the main Naryshkin mansion adjoined a wing that had been built at a later date. The utensils hidden in the crypt for almost a century were in excellent condition and impressed the experts examining them when they found that the gold plated objects had not lost their shine, the silver had not blackened and the mirrors were not cracked. They praised the people who had been in charge of hiding the collection when they saw that all items had been carefully packed, folded in newspapers and cloth soaked in vinegar.

Some whole dinnerware sets were among the ‟Naryshkin treasure” bearing the stamp of the best Russian gold and silversmiths of the late 19th and early 20th centuries, such as Khlebnikov, Ovchinnikov and the Grachev brothers. There are also some items with the stamp of the famous house of Faberge. The dinner service sets had obviously been ordered by the Naryshkins, since the family’s coat of arms was on many of them.