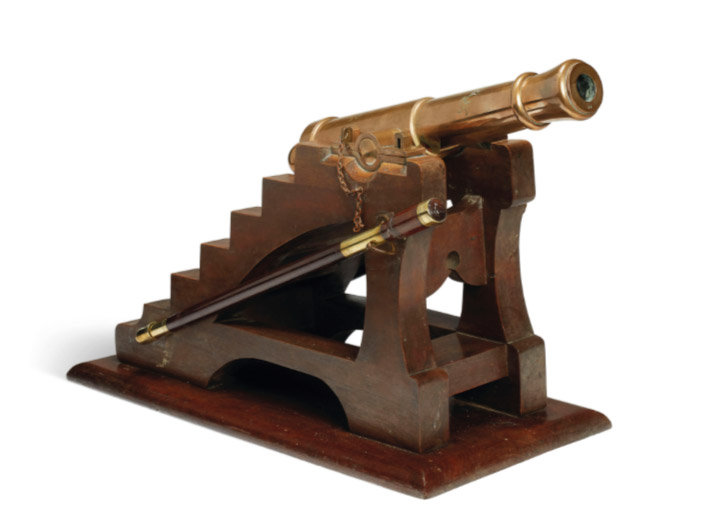 Authentic souvenir of the Eiffel Tower up for sale

By descendants of Gustave Eiffel

It was announced by Christie’s auction house that in Paris on April 18, the descendants of Valentine, daughter of Gustave Eiffel, will auction the only miniature replica of the Eiffel Tower cannon which until 1914 was fired at midday on the dot.

The replica whose value is estimated between 10,000 and 20,000 Euros, had been offered to Gustave Eiffel in 1889 by Chober a maker of arquebus (a type of old fashioned gun) in Paris, who made the cannon known as ‟The Eiffel”.

Made of brass, walnut wood and Brazilian rosewood, the copy is 65 cms long. Gustave Eiffel had had it placed in his office in the Tower.

The actual cannon, installed on the second floor of the monument during the opening of the Eiffel Tower in 1889, was fired every day to mark the opening and closing of the World’s Fair.

Up to 1914, cannon shot also sounded the hour, at 12 noon on the dot, continuing the duties of the first cannon installed for the same reason in 1786 in the gardens of the King’s Palace, in the first arrondissement of Paris.

‟It is a really very moving to be able to auction an object which is so emblematic of the history of Paris and of the Eiffel tower, and which actually comes from an offspring of Gustave Eiffel” said Simon de Monicault, director of Christie’s department of Decorative Arts.