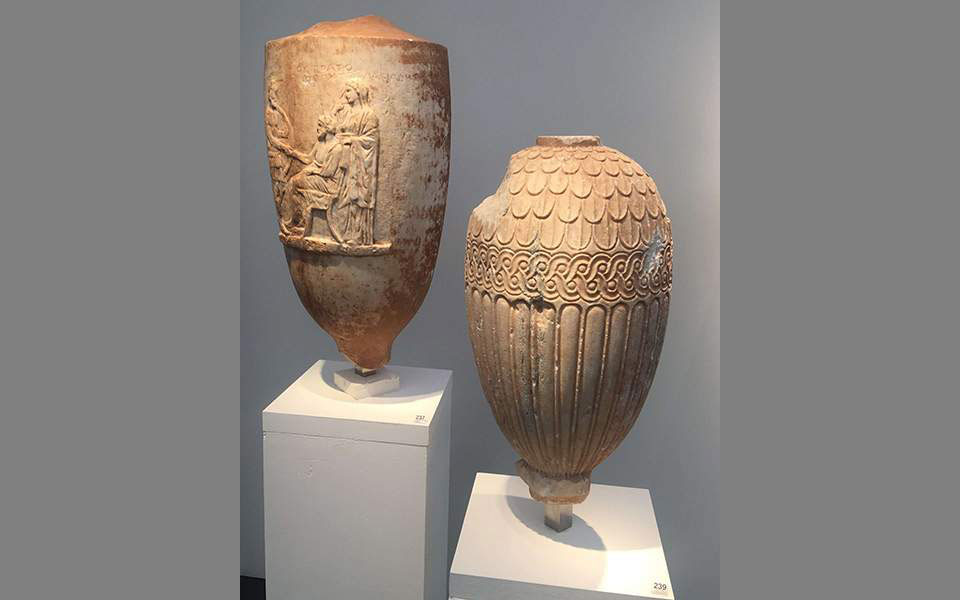 Switzerland and Greece discuss the repatriation of artefacts

Two ancient Greek vessels are the object of negotiations between Greek and Switzerland regarding their repatriation. The items are made of marble, they are almost 60 cm high and date to the 4th century BC. They are a funerary lekythos, which depicts the deceased and his family and bears an inscription with their names, and a loutrophoros

The two vessels were spotted in October 2017 in London, at the Frieze Masters exhibition where they were put on display by Swiss art dealer Jean-David Cahn. A student of forensic archaeologist Christos Tsirogiannis at Cambridge University saw the vessels and knowing Tsirogiannis would be interested sent him photographs of the pieces. And that’s where the actions leading to repatriation negotiations of the two vessels started. Mr Tsirogiannis did some research and found out that the provenance of the items was not as transparent. After some more research he found that there had been photographs of the two vessels from the seized archives of Gianfranco Becchina, a notorious Italian antiquities smuggler, who was convicted in Greece for accepting artefacts stolen from Greece and for embezzlement. He then informed Interpol, who seized the items from Mr Cahn.

The two vessels were part of the Becchina archive, as is testified by photographs of the items among many others of Greek origin in the archive sent to the Culture Ministry in Greece in 2006. The set of photographs has been used to identify items that may have been trafficked. In 2011, items from the Becchina archive were sent back to Switzerland, the two vessels among them, which were to be sold and help settle part of Becchina’s debt to the state. The person who would mediate for the selling of the two vessels on behalf of the Swiss authorities was Cahn.

The case has been assigned to Ilias Bissias, a lawyer who has represented the Greek state in similar claims in the past. Mr Bissias is based in Athens and Zurich and refused to make any comment on the case as it is ongoing. The Greek judicial authorities have also launched a preliminary investigation into the provenance of the two vessels.

In 2007 Greece and Switzerland signed a bilateral agreement for the repatriation of cultural goods.