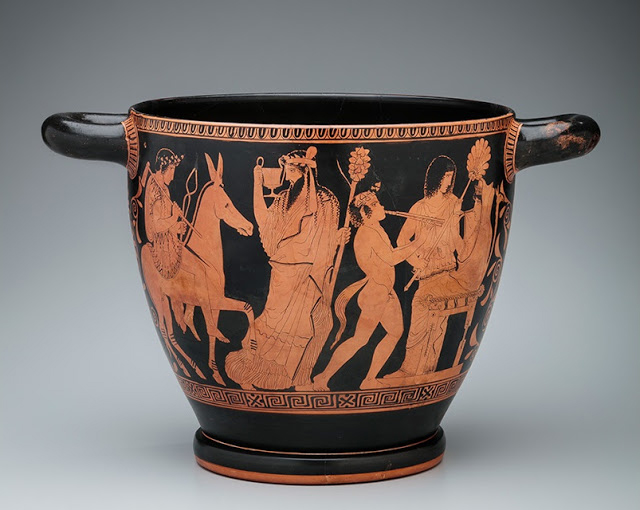 The Toledo Museum of Art and the Italian Ministry of Heritage and Cultural Activities announced that they have reached an agreement for the repatriation of an object in the Museum’s collection.

The Attic red-figured skyphos, an earthenware drinking vessel decorated with the story of the return of Hephaistos to Olympos, is attributed to the Kleophon Painter of Athens, Greece, and dates to approximately 420 BC.

It depicts Hephaistos, the metalsmith for the gods, who was thrown out of Olympos by his mother, the goddess Hera, wife of Zeus. Hephaistos sought revenge by making a trap for Hera in the form of a magnificent throne. When she sat in it, she was stuck and none of the gods could free her. Dionysos, god of wine and theater, made Hephaistos drunk and he eventually freed Hera and was reconciled with his divine family.

The skyphos was used at men’s drinking parties and is one of the largest such cups known. As a result, it would have been almost impossible to drink from and may have been used instead as a mixing bowl (krater).

According to the press release of the Toledo Museum of Art: “Per the agreement, the vessel will remain on view at TMA for four years, after which the Museum may ask to renew the loan or request another significant object from the Italian government as part of a continuing and rotating cultural exchange.

”The Toledo Museum of Art purchased the skyphos in 1982 for $90,000 with funds gifted from Edward Drummond Libbey. The provenance of the object was called into question in 2017 by Christos Tsirogiannis, a forensic archaeologist, after which the Museum began an internal investigation and contacted the Italian authorities.

”The vessel has been on display as part of the Museum’s permanent collection since its acquisition and was included in the 1996-97 special exhibition The Fire of Hephaistos: Large Classical Bronzes from North American Collections, which originated at TMA and subsequently traveled to the Tampa Museum of Art in Florida.

”TMA is committed to the protection of cultural patrimony and to the responsible acquisition of archaeological materials and ancient art. Its collections management policy adheres to the strictest ethical guidelines, institutional transparency and professional best practices. TMA rigorously investigates the provenance of all new acquisitions and continues to research objects already in its collections that may have questionable provenances. The Museum has been proactive in resolving all ownership claims and welcomes new information on objects in our collections.”

A detailed account of the story was published in Art Crime: “Soft diplomacy, righting past wrongs and the Toledo Museum of Art”.