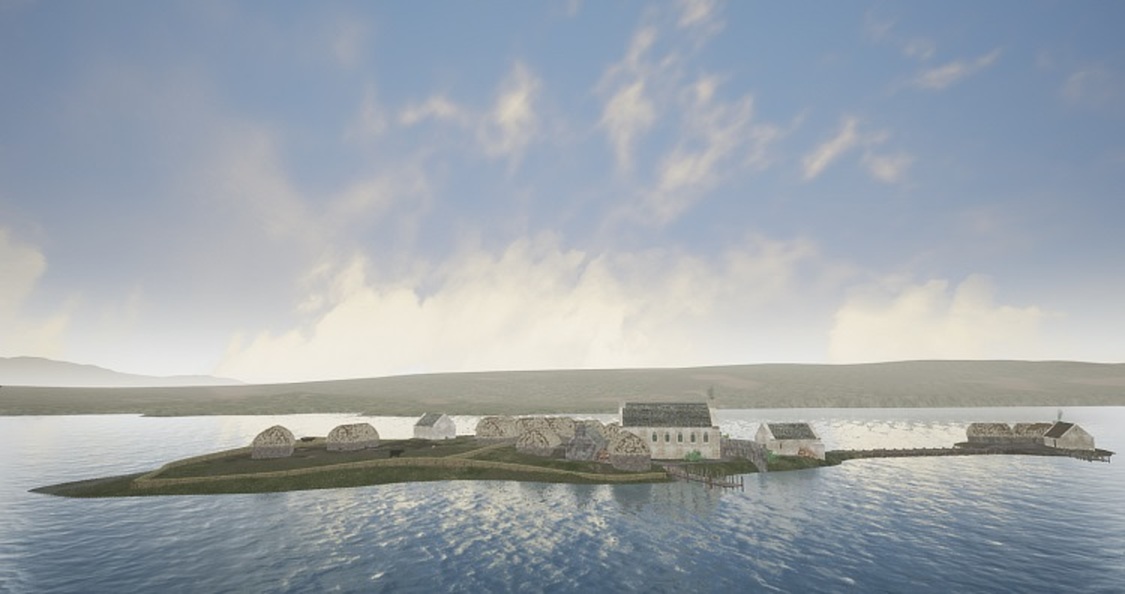 Medieval home of Lords of the Isles virtually reconstructed

Showing Finlaggan in its glory days

The lost medieval home of the Lords of the Isles has been reconstructed virtually by experts at the University of St Andrews.

In collaboration with the Finlaggan Trust, the reconstruction is based on discoveries made by the Finlaggan Archaeological Project, led by archaeologist Dr David Caldwell (formerly of the National Museum of Scotland), who provided advice to the St Andrews team.

Documentary research and comparison with other late medieval sites has been used to ensure the reconstruction is as accurate as possible.

The reconstruction represents Finlaggan in the early fifteenth century – a time when it was the administrative and ceremonial centre of the Lordship of the Isles.

During the Middle Ages the Lords of the Isles ruled the Hebrides and parts of mainland Scotland and Ulster. Traditionally the Lordship was held by the MacDonald family.

However, following disputes in the fifteenth century the Scottish kings sought to curtail the MacDonalds’ influence, and in the 1490s James IV sent a military expedition to sack Finlaggan. Many of the buildings at Finlaggan were destroyed at this time, and over the centuries that followed the site sank into relative obscurity.

The reconstruction shows what Finlaggan may have looked like in its glory days when it was the seat of the Council of the Lords of the Isles, and the scene of inauguration ceremonies for the Lords.

It depicts the twin islands of Eilean Mor (or Large Isle) and Eilean na Comhairle (or Council Isle), and their surroundings on Loch Finlaggan. Interestingly, by the late Middle Ages, the Lords of the Isles’ residence at Finlaggan had little in the way of defensive structures – possibly indicating how secure the MacDonalds felt in the heart of their powerbase on Islay.

The reconstruction will be available as an interactive virtual reality experience at the Finlaggan Trust’s visitor centre on Islay. There is also a virtual reality app and an online video.

Dr Bess Rhodes, of the University, said: “Finlaggan was an amazing place to recreate digitally. Even today the islands of Eilean Mor and Eilean na Comhairle are beautiful places, and in the Middle Ages they were the site of a remarkable complex of buildings which blended local traditions with wider European trends.

“The work by Dr David Caldwell and the Finlaggan Archaeological Project has transformed our understanding of this site – giving us a glimpse of the relative comfort in which the Lords of the Isles and their followers lived, pampering their dogs with decorative collars, and enjoying music, imported wine and board games.”

Dr Ray Lafferty, Secretary of the Finlaggan Trust, said: “Despite its impact on the shaping of Scottish culture, Finlaggan and the Lordship remains little known to many.

“With this virtual reality reconstruction, we hope to give some sense of the site at the zenith of its power, when MacDonald rule stretched from the Glens of Antrim in Ireland to Buchan in the northeast of Scotland.”