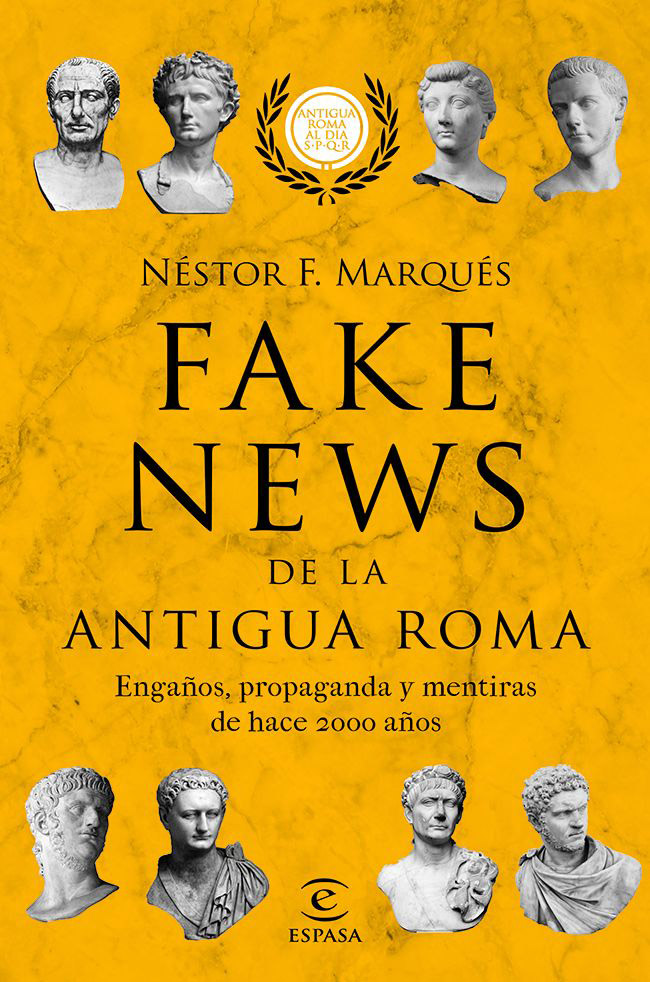 Fake news in the history of Rome

Referred to in relevant book by Spanish archaeologist

According to the classic film Quo Vadis (1951) starring Peter Ustinof, legend has it that Nero set fire to ancient Rome for fun and played his lyre in ecstasy over the spectacle of the flames swallowing up the buildings of the Ancient City. In that distant 64 B.C. however, as testified by the sources, Nero was not in Rome but in Antium, while excavations have proved that the fire was caused accidently.

As pointed out by archaeologist Nestor Marques, author of the new book Fake News de la Antigua Roma. Engaños, propaganda y mentiras de hace 2000 años —meaning “Fake News in Ancient Rome: Defamation, propaganda and lies of 2000 years ago”— (Espasa publications, 2019) ‟it was a case of Chinese whispers: rumours circulated that Nero was seen in a garden, someone else added that he was watching the fire from a tower, and many years later the legend was added that he was playing his lyre in the palace while the flames destroyed Rome. The historical truth however is entirely different.”

The story of Nero, nevertheless, is not the only example of a twisted version of historical facts handed down to us and part of collective fantasy even today: ‟A huge amount of fake news has been created about the Roman world , some of which was fashioned by the Romans themselves for political reasons —to undermine an emperor for example, or to praise another— but there are also many stories that were changed with the passage of time” says Nestor Marques.

Many of these distorted stories from Ancient Rome have survived in the collective unconscious down to our times thanks to Hollywood. As for example in gladiator matches where in many films a gladiator confronts many opponents swinging a chain with a nail-studded ball attached to it ,which is however a  Medieval weapon. Or the killing of Christians by throwing them to the lions : ‟This sentence existed but only as a punishment for particular crimes and not for religious reasons”, says Marques who believes that ‟many fabrications″ have been created regarding the persecutions of the Christians. ‟ In three centuries only a few hundred had been sentenced and over a short thirteen year period. But even the Roman edicts issued against the Christians clearly emphasize that bloodshed must be avoided when possible”, notes the author.

In his opinion, one of the greatest distortions in history and the image of Rome occur in the case of the Roman citizens and their famous Bacchanalia ‟the legend of the orgiastic banquets with unbridled sex and abundant food”. As Mr Marques explains: ‟the Bacchanalia have nothing to do with this; they were typical religious ceremonies in honour of Bacchus, god of wine”. This false perception was formed in 186 B.C. It was then that consul Postumius, upon learning that men were participating in the Bacchus celebrations ,which had till then been restricted to women (as we also know from Euripides’ Bacchae), reported this to the Senate and warned it of its dangers. ‟A witch hunt followed. A false rumour spread that during these celebrations ,based on the union with the god’s spirit through music and dance, the participants gave themselves up to orgies and murders, thus convincing the people that something frightening took place there , while a few individuals were executed so as to avoid a spreading of this cult”, explains Marques.

Among the perverted images of emperors expressly created, apart from Nero the pyromaniac, Marques also mentions foolish Claudius and the inhuman tyrants Domitian, Caligula and Comodus; all of them victims of damnatio memoriae by their opponents. For example, the historians Suetonius and Tacitus described Domitian as behaving like a beast to Trajan‟since their aim was to praise the latter”, explains Marques. Furthermore, there are very few sources on Domitian, perhaps only what his slanderers have left behind. Nevertheless even from the sparse evidence surviving of his rule, it turns out that Domitian ‟was an able emperor who saw to the Romans’ prosperity, leaving a surplus in the treasury”.

The woman most harmed by malicious Roman gossip was Livia, wife of the emperor Augustus. Hers is a strong case of the way Roman society treated women. According to Marques, Livia was the first powerful woman in Rome. ‟She freed herself from male oppression by marrying Augustus and enjoyed such popularity that she was named mater patriae. But she had to be stigmatized as a terrible woman, because otherwise she could not have achieved such a high rank”, he says. Tacitus attributed to her the poisoning of Augustus’ off spring, turning her into a ‟murderous stepmother”. In ancient Rome, as in Disney’s films, the image of the stepmother is synonymous with evil. It also came out that Livia might have been responsible for the death of Augustus, accusations that have come down to our times through Robert Graves’ book ‟I Claudius”, later adapted for television in the series by that name. ‟But if Augustus died at the age of 75, why did Livia wait that long?” asks Marques.

Other than lies and defamation, the Romans also used propaganda most successfully. The epic of the Aeneid, apart from its indisputable literary value ‟is a work commissioned by Augustus to convince the people of Rome to surrender its power and that it would be in its best interest”, explains the modern archaeologist.

Shall we ever learn however what really went on in ancient Rome? According to Marques we should confine ourselves to ‟joining various scattered pieces”, so as to acquire an approximation of real history. Because history, whether ancient or of our times, ‟is an intricate set of facts, false and personal opinions, mixed into a large system which is often difficult for us to decipher”, stresses Marques, also warning today’s reader that ‟we are a reflection of our ancestors: nihil sub sole novum/nothing is new under the sun”.