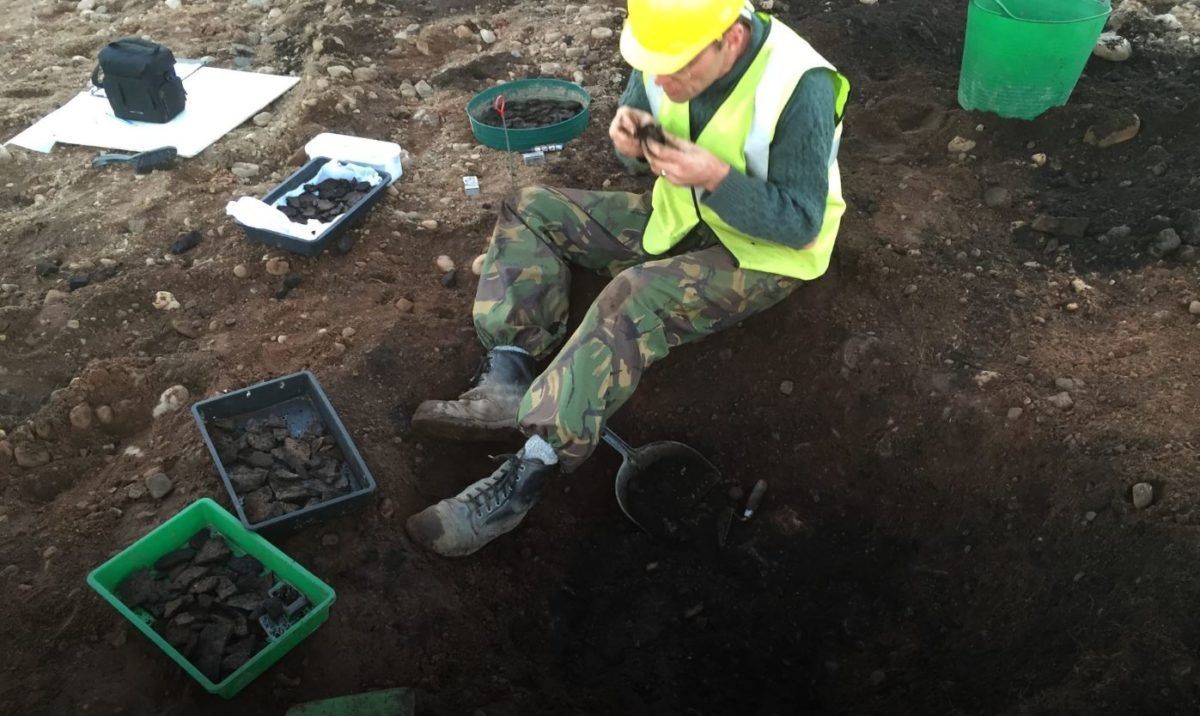 At Kirkton of Fetteresso near Stonehaven in Aberdeenshire

Archaeological excavations at Kirkton of Fetteresso near Stonehaven in Aberdeenshire have revealed a palimpsest of human occupation and activity spread over at least four and a half millennia from the early Neolithic to the early medieval period.

306 sherds of pottery from a single pit appear to predate the previous horizon of 3,800 BC for the earliest Neolithic Pottery in Scotland. New radiocarbon dating evidence indicates that the sherds of carinated bowls found at Kirkton of Fetteresso were probably deposited sometime between 3952 BC to 3766 BC.

This suggests that the Neolithic pottery from this site was produced by (or imported by) one of the first few generations of farmers in, or arriving to, Scotland at the beginning of the fourth millennium BC.

Prior to this, Scotland was inhabited by small groups of nomadic hunter-gatherers who exploited the natural resources of the wild landscape. The beginning of the Neolithic period was one of the most significant periods in Scotland because this marked an enormous change in the population and the landscape.

The beginning of farming was begun by new communities of farmers from Europe who brought new species of plants and animals to Scotland, established permanent settlements and cleared huge tracts of woodland, transforming the landscape.

“There are only one or two sites in Britain which have similar early dates: Coupland in Northumberland and Eweford Pit in East Lothian, which corroborates the notion that the carinated bowl tradition first reached north-eastern Britain, primarily Scotland but also Northumbria, before becoming visible elsewhere in Britain,” said Robert Lenfert who co-authored the report. “This new evidence doesn’t support the previous notion that early Neolithic colonisation followed major rivers.

Rather, it is more convincing to postulate that this technology – and those capable of producing it – arrived directly via sea-routes into Stonehaven Bay, further supporting the evidence that this pottery is very early in the Neolithic period in Scotland.”

“What is also particularly striking about Kirkton of Fetteresso is the apparent repetitive yet episodic activity within this relatively small area over at least four millennia,” said co-author Alison Cameron. “The landscape surrounding the site contains numerous prehistoric features which span a similar timeframe, including Mesolithic remains and early Neolithic pits also containing carinated bowls. The new radiocarbon dating evidence we have gathered has revealed Kirkton of Fetteresso as a palimpsest of periodic activity covering the early Neolithic, the late Bronze Age, the early and middle to later Iron Ages (pre-Roman) and the early medieval or Pictish period.”

The landscape around Kirkton of Fetteresso undoubtedly contains more information that could help shed light on some of the earliest farmers to settle in Scotland over six thousand years ago.

This research was undertaken by Cameron Archaeology and funded by GS Brown. ARO34: Past the Cemetery Gates: A multiperiod site at Kirkton of Fetteresso, Stonehaven, Aberdeenshire by Robert Lenfert and Alison Cameron with contributions from Laura Bailey, Torben Bjarke Ballin, Paul R J Duffy, Tim Holden and Julie Lochrie, is freely available to download from the ARO website – Archaeology Reports Online.

Analysis of the findings, which have recovered the earliest known Neolithic pottery in Scotland, has just been published in www.archaeologyreportsonline.com.