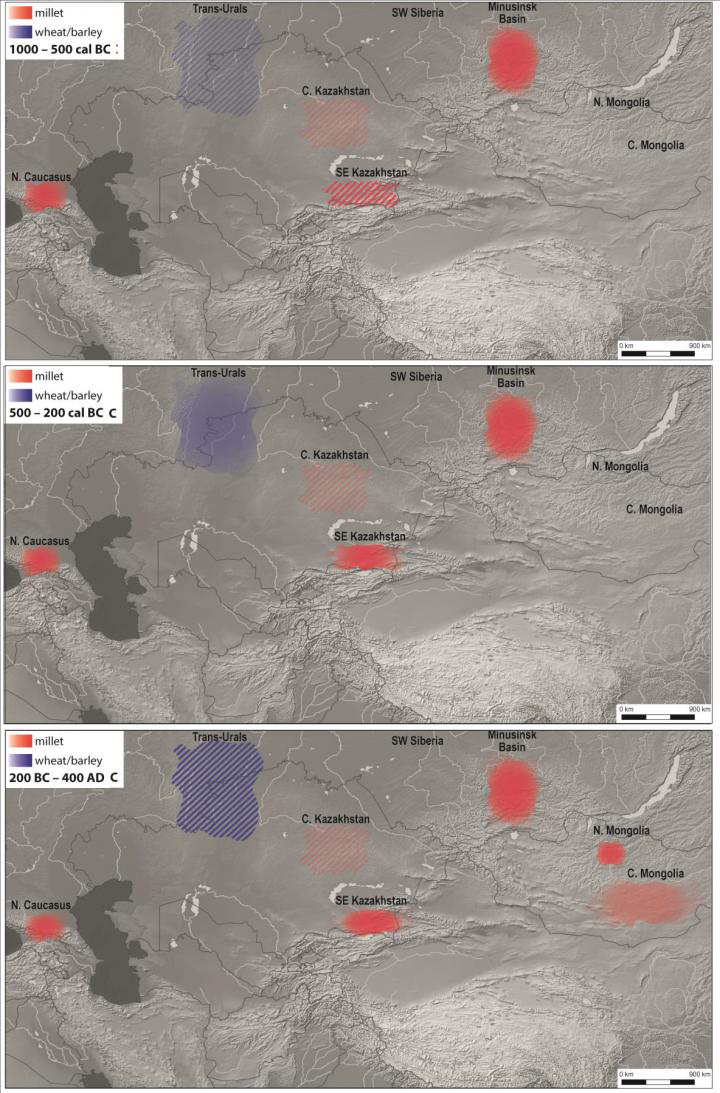 As early as the late third millennium

A meta-analysis of dietary information recorded in the bones of ancient animals and humans recovered from sites scattered across the Eurasian steppe, from the Caucasus region to Mongolia, demonstrates that pastoralists spread domesticated crops across the steppe through their trade and social networks. Researchers from Kiel University sifted through previously published stable isotopic data and applied new quantitative analyses that calibrate human dietary intake against environmental inputs. The results have allowed them to better isolate the timing of the incorporation of agricultural products into the diets of pastoral nomads and, crucially, link burgeoning socio-political networks to this dietary transformation.

Through a big data project that explored over a thousand stable isotope data points, researchers were able to find evidence for an early transition to agriculture based on dietary intake across Eurasia. “Our understanding of the pace of crop transmission across the Eurasian steppe has been surprisingly unclear due in part to a focus on the excavation of cemeteries, rather than settlements where people threw out their food,” says Alicia Ventresca Miller, lead author, formerly of Kiel University and currently at the Max Planck Institute for the Science of Human History. “Even when settlement sites are excavated, the preservation of carbonized seed remains is often poor. This is what makes stable isotope analyses of human remains from this region so valuable — it provides direct insights into the dietary dynamics of ancient pastoralists who inhabited diverse environments.”

Millet spreads across the Eurasian steppe

Millet, originally domesticated in China, appears to have been occasionally consumed at low levels by pastoralists inhabiting the far-flung regions of Siberia and southeastern Kazakhstan, possibly as early as the late third millennium. This initial uptake of millet coincided with the expansion of trans-regional networks across the steppe, when objects and ideas were first regularly exchanged over long-distances.

However, it was not until a thousand years later that millet became a regular feature of pastoralist diets. This timing coincides with the intensification of complex political structures at the transition to the Iron Age. Burgeoning socio-political confederations drove a marked increase in the exchange of costly prestige goods, which strengthened political networks — and facilitated the transfer of cultigens.

Wheat and Barley in the Trans-Urals

Despite taking part in these political networks, groups in the Trans-Urals invested in wheat and barley farming rather than millet. A dietary focus on wheat and barley may have been due to different farming techniques, greater water availability, or a higher value on these cultigens. “Our research suggests that cultigens were converted from a rare luxury during the Bronze Age to a medium demarcating elite participation in political networks during the Iron Age,” states Cheryl Makarewicz of Kiel University.

While herding of livestock was widespread, not all regions adopted millet. In southwest Siberia, dietary intake was focused on pastoral animal products and locally available wild plants and fish. In contrast, the delayed adoption of millet by populations in Mongolia during the Late Iron Age coincides with the rise of the Xiongnu nomadic empire. “This is particularly interesting because it suggests that communities in Mongolia and Siberia opted out of the transition to millet agriculture, while continuing to engage with neighboring groups,” explains Ventresca Miller.

This study shows the great potential of using the available isotope record to provide evidence for human dietary intake in areas where paleobotany is understudied. Further research should clarify the exact type of grains, for example broomcorn or foxtail millet, were fundamental to the shift in dietary intake and how networks of exchange linked different regions.