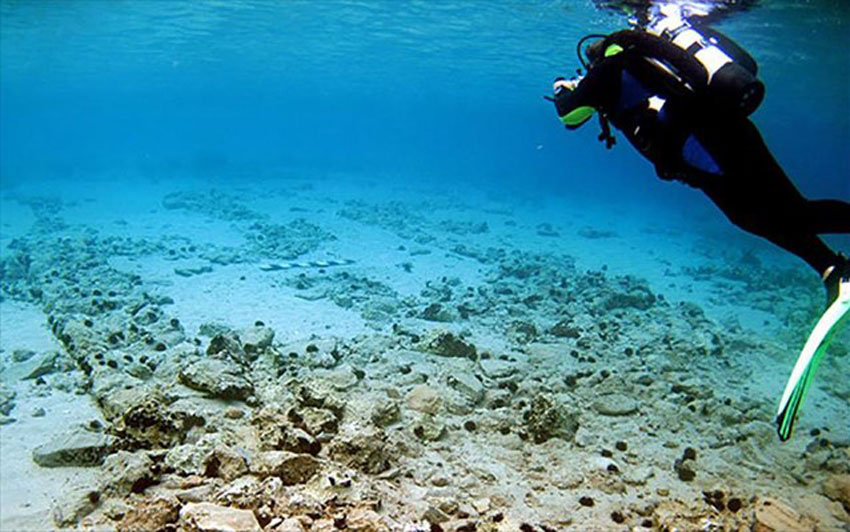 Underwater routes in the submerged prehistoric settlement at Pavlopetri

Underwater routes for swimmers over the submerged prehistoric settlement at Pavlopetri in Laconia are in the plan of the Ephorate of Underwater Antiquities (EUA), recently approved by the Central Archaeological Council. Moreover, the plan’s novelty is that it links the archaeological site’s enhancement to the protection and enhancement of the important wetlands on a single eco archaeological route.

The prehistoric settlement of Pavlopetri extends between the islet by that name and the Pounta coast where, in the third millennium BC, there was a strip of land joining the coast of Laconia with today’s island of Elafonisos. The settlement is submerged only a few metres below the sea, making it very easy to visit with flippers and mask. At a depth of 1 to 4 metres a great area of the city’s layout has survived, with streets, buildings and an extensive cemetery on the coast.

The proposal of the EUA not only hopes to enhance the important archaeological site and the region’s rare wetlands but to also promote the greater area of Voion (Neapolis) as a place for eco archaeological routes and alternative tourism. In other words “the objective of the overall management plan is to design the middle term and long term operation of research, environmental, educational and developmental activities″, said Despina Koutsoumba, diving archaeologist of the EUA, to the Athens and Macedonian News Agency. She prepared the study along with Konstantinos Kypriotis, a diving biologist of the EUA, in collaboration with specialists from the Hellenic Centre for Marine Research. Ms Koutsoumba noted that “this plan cannot be realized without the involvement of the local society and without depending on the protection and enhancement of the archaeological reserves and the natural environment of the greater area around the submerged settlement and the Natura 2000 region where the underwater archaeological site is situated. This enterprise is founded on partnerships we have already established with local bodies, the Municipality of Elafonisos and the Region of the Peloponnese”.

Protective measures for the area are to be direct or long term to a greater or lesser degree. For example, the former include banning use of the area for illegal fishing, illegal camping, the mooring of boats etc, removing all parking from the wetlands and providing parking space outside the boundaries of the archaeological site, establishing sign posting indicating both prohibited uses for the archaeological site and the NATURA 2000 region, installation of waste bins especially designed for the region etc. The monitoring and study of erosion and changes of the coast line are proposed as middle term protection measures, as well as rescue operations for preserving, stabilizing and restoring the submerged antiquities and those on the shore where necessary.

Walking and swimming routes are proposed for Pavlopetri’s enhancement: for swimmers in particular, the plan provides underwater signposts to help visitors tour the settlement, equipped with masks and flippers. Plans have also been made to design maps with interesting spots in the greater area and possible routes for visitors on land and sea, as well as educational programmes, regular underwater guided tours for the public, digital applications, linking the archaeological site with the findings in the Museum of Neapolis and the exhibition of underwater finds of the EUA at Pylos etc. Moreover, it is important that the study takes special care of the Caretta Caretta nesting/egg laying area, the cleaning, marking and protection of which should be required by law. Environmental programmes are also encouraged in the region, as well as the removal of disturbances such as beach bars, umbrellas and coastal lighting.

Following the release of the Ministerial Decision approving the management plan, special studies will be needed to implement it and funding will be sought. Pavlopetri’s enhancement is a pilot project for the EUA. “It is a way to make submerged coastal sites, harbours and settlements in particular, accessible and comprehensible to the swimming public” said head of  the EUA Pari Kalamara to the AMNA. “Our aim is to continue this enhancement in similar archaeological sites such as Kenchreai, Kyllini, Plytra, Limeni etc.”, she added.

Pavlopetri is a very important archaeological site, of international scope and great enhancement potential, situated in an area of particular beauty and natural wealth. The dangers facing this site and the environment, caused both by anthropogenic factors and natural catastrophes, make it necessary to deal with them jointly, i.e. regarding the archaeological site and the wetlands, and the NATURA 2000 region in general. The challenge now is for the EUA to efficiently co-operate with the NATURA 2000 Management Body so to make it possible to jointly address, protect and enhance the region.

In its heyday, the settlement’s population possibly ranged from 500 to 2.000 inhabitants. The city was certainly inhabited for at least two thousand years (from the 3rd to the end of the 2nd millennium BC) and following three earthquakes (the results of relevant research is expected) and possibly other factors, the city gradually sank under the surface of the sea and ultimately forgotten.

The first references to the submerged settlement date back to the beginning of the 20th century (1904), while its remains were re-discovered in 1967 by Nicholas Fleming, who confirmed the existence of the prehistoric city. Since then, the area has been extensively researched: In 1968, by a group of archaeologists from the University of Cambridge, in which the Greek side had participated with the late Angelos Delivorrias, then serving in Sparta. A new research project was launched in 2009 by the University of Nottingham, the Ephorate of Underwater Antiquities and the Hellenic Center for Marine Research, under the direction of Elias Spondylis. In 2011 in fact, excavation trenches were also opened.

The archaeological site became well-known abroad after the release of the BBC documentary “Pavlopetri – City Beneath The Waves” in 2011. Since then, many tourists have arrived in the area to see the submerged settlement. It is not easy to locate under the surface of the sea, while arriving at the beach, which is a traditional camping spot, poses a risk to both the archaeological site and more so to the wetlands surrounding it, which host rare bird species.