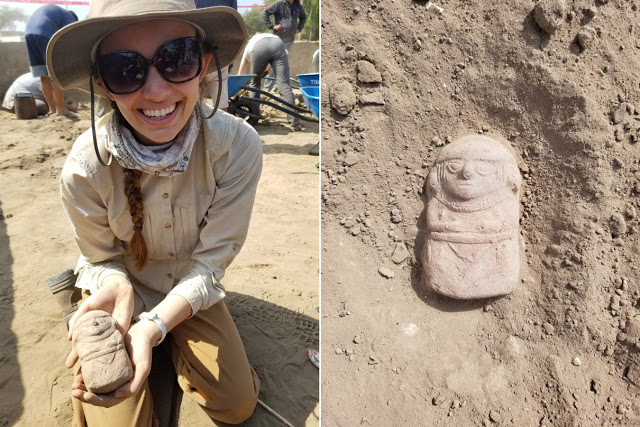 She found a fully intact figurine

Caroline Coolidge was stunned. The rising second-year was digging at the archaeology field school in San José de Moro, Peru, and there in the dusty dirt a small face stared up at her. She thought her eyes were playing tricks on her.

“I honestly at first just thought I was imagining it because I just wanted to find something so bad,” said Coolidge, a Leverett House resident who is taking part in the summer archaeology program run by Pontifícia Universidad Católica del Perú in collaboration with the Harvard Summer School Study Abroad Program. “I thought, “This can’t be this intact piece of pottery.” But I just kept brushing away. I was honestly speechless when I saw what it was.”

It turned out to be truly special.

Earlier in the week students had unearthed fragments of ceramic vessels, a typical find at one of the oldest ceremonial burial grounds for the Moche, a pre-Columbian civilization that flourished along Peru’s northern coast between the first and eighth century AD. But Coolidge had come up empty. “I hadn’t really found anything where I had been working,” she said. “I was excited but feeling a little bit discouraged because I wondered if I was doing this wrong.”

Determined, she kept at it, using her trowel to methodically clear away dirt in the site’s northwest corner. Then, as she brushed the dried soil from what she thought was a rock, she slowly uncovered a fully intact figurine, likely from the transitional period between the Moche and Lambayeque cultures and approximately 1,000 years old. In addition to its pristine condition, what made Coolidge’s discovery so unusual was the absence of other objects nearby. “Typically, this type of artifact would be included in a burial,” she said, “but there were no burials found near it.”

Studying the cultural heritage of some of Peru’s earliest civilizations is at the heart of the field school run by Luis Jaime Castillo Butters, a visiting professor at Harvard in 2016 and professor of archaeology at Pontifícia Universidad Católica, who was recently named Peru’s minister of culture, and by Gary Urton, Harvard’s Dumbarton Oaks Professor of Pre-Columbian Studies. During the five-week program participants visit Peruvian archaeological sites and museums and learn the fundamentals of archaeological documentation and analysis. They also learn how to excavate, uncovering funerary relics and other items that point to how groups such as the Moche celebrated life and death, and how and why they flourished or failed.

“We are trying to understand another culture by looking at their material remains,” said Urton, whose research focuses on pre-Columbian and early colonial Andean cultural and intellectual history. “All of these Peruvian civilizations did not have writing so we don’t have their own words … what we do have is what they lived with, what they made, what they used in their day-to-day lives. So what we try to do then with the students is have this balance between the real physical excitement of working in the field and the intellectual challenge of thinking about what it all means.”

Coolidge is eager to find out more about what her figurine might mean—archaeologists at the site suspect it may have been used as a fertility offering. Urton called it “an extraordinary piece” and “one of the most complete and beautiful figurines we have brought up from here in several years.” Coolidge plans to write about the artifact for her final class project and will study its composition and compare it with similar finds at the site in recent years, she said, to determine “its cultural significance and where it fits within the region’s chronology.”

On a Skype call after a long day of digging, Coolidge said the experience had helped her hone her academic focus. She said she intends to either concentrate in archaeology or make it a secondary field of study during her time at Harvard.