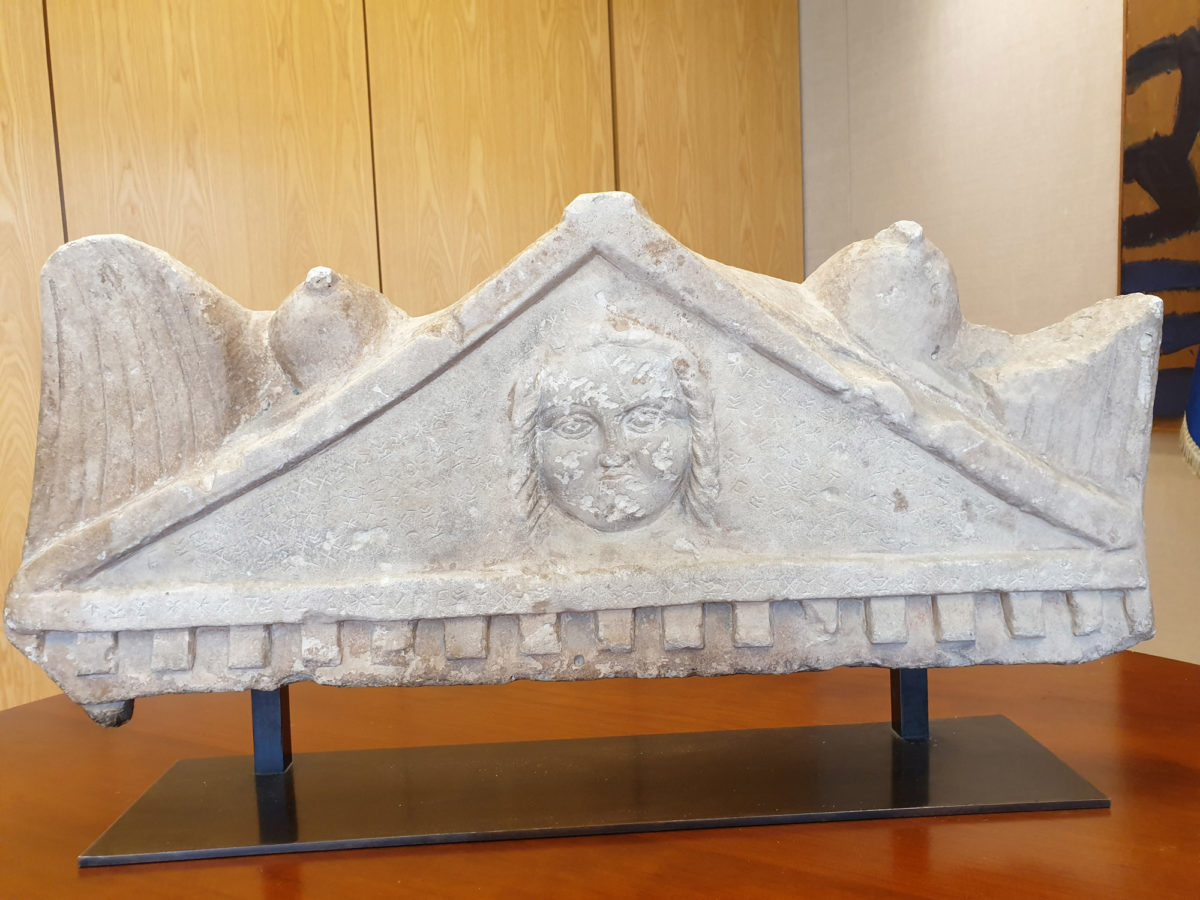 Repatriation of an inscribed pediment of a funerary stele to Cyprus

It was handed over yesterday

The Department of Antiquities, Ministry of Transport, Communications and Works, has announced that on Thursday 12th September 2019 an important antiquity originating from Cyprus, was handed over at the offices of the Permanent Representation of the Republic of Cyprus to the European Union in Brussels. The Cypriot antiquity was in the possession of Ms. Christiane Koojj, a resident of Brussels, Belgium. Ms. Koojj had recently informed in writing the Ambassador of the Republic of Cyprus in Paris that the cultural object was inherited to her and her siblings from their late mother and that their request was to deliver it back to its country of origin. The Ambassador of the Republic of Cyprus in Belgium referred Ms. Koojj to the Director of the Department of Antiquities as the competent authority on such matters.

The said antiquity is the upper part of a limestone funerary stele consisting of a horizontal cornice, decorated with geisipodes in relief, over which a pediment with a frame in relief is formed. The pediment corners are crowned by acroteria, two of which (at the lateral ends) are decorated with roughly carved anthemia, while the central one, without bearing any sign of breakage, is scarcely marked. In the middle of the two oblique sides of the pediment, there are carved pomegranates. In the middle of the pediment, within the frame in relief, appears to be an apotropaic Medusa head (Gorgoneion). The horizontal cornice bears a Cypro-syllabic inscription, while other Cypro-syllabic symbols cover the pediment, which may be later additions. Based on palaeographic criteria, the inscription dates to the end of  the 4th-beginning of the 3rd century BC.

The carved pediment is very similar to another Cypriot funerary pedimental stele from the village of Tremetoushia (Larnaka District), now in the British Museum. The Tremetoushia pediment had been previously dated to the 1st century AD, however, the discovery of this second similar stele, which is evidently from the same workshop, allows for a more accurate dating, four centuries earlier than the initial dating.

The antiquity was handed over to the Director of the Department of Antiquities Dr. Marina Solomidou-Ieronymidou by Ms. Christiane Koojj in the presence of the competent Ambassador of the Republic of Cyprus Mr. Elpidoforos Economou. Present during the ceremony were Police Inspector Mr. Michalis Gavrielides, Head of the Office for Combating Illegal Possession and Trafficking of Antiquities (Cyprus Police), Dr. Eleftherios Charalambous, Conservator at the Department of Antiquities and Mr. Lucas Verhaegen of the Belgium Police.

The repatriation of the antiquity to Cyprus will take place on 15 September 2019 and is the result of the coordinated efforts of the Ministry of Foreign Affairs, the Department of Antiquities, the Cyprus Police and the Department of Customs and Excise.